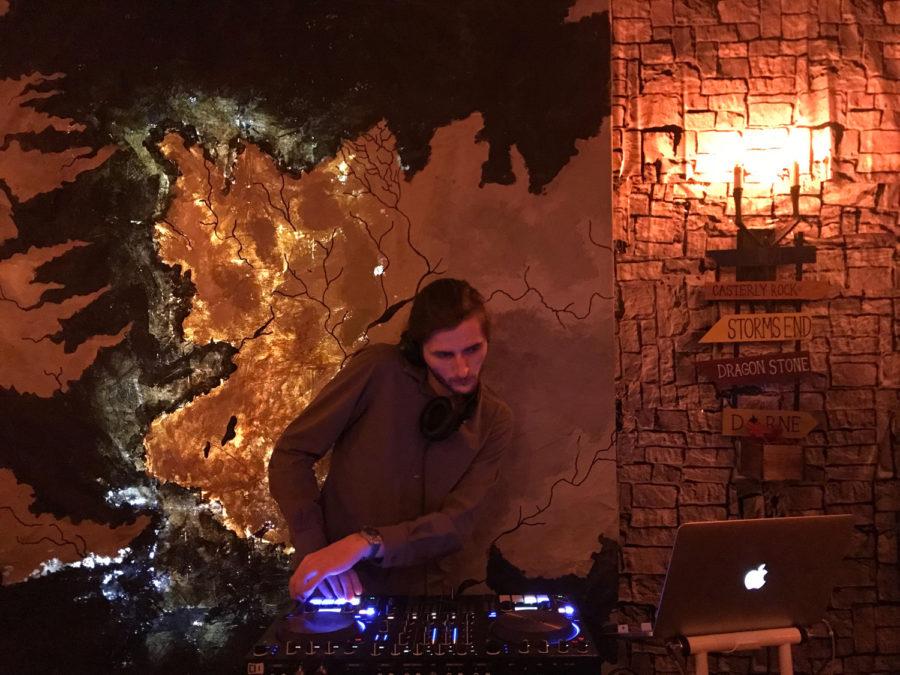 Interior of the “Game of Thrones” pop-up bar.

A pop-up bar is just as it sounds: a bar that appears in a space for a short amount of time, before moving on to another space or vanishing entirely. Lots of pop-ups are pop-culture-themed, like The Upside Down, a “Stranger Things”-themed bar that ran from Aug. 18 to Oct. 1 in Chicago last year.

Bar of Thrones follows numerous pop ups in the same space — 268 Forbes Ave. —  such as The Jingle Bar for Christmas, the XO Bar for Valentine’s Day and Clover Bar for St. Patrick’s Day. Each of these have been orchestrated by MW Hospitality, the company that owns the space.

As “Game of Thrones” enters its eighth and final season, Bob Wilfinger, owner of MW Hospitality, expects business to boom.

“If this [last weekend was] an indication of the next four to five weeks, it will exceed what we did with the Jingle Bar,” Wilfinger said. “And I think this weekend is going to be freaking crazy.”

Wilfinger, owner of multiple Market Square restaurants including Nola On the Square and Wolfie’s Pub, was inspired to use the space at 268 Forbes to take advantage of the pop-up bar phenomenon.

Though pop-up bars are semi-permanent at best, the decor at Bar of Thrones is designed to invite visitors into the world of Westeros. The back of the bar is a replica of the Weirwood trees from Winterfell, complete with a slumbering face and lots of red leaves. The bar also features a full map of Westeros behind the DJ, along with a wall of faces like the ones the Faceless Men from the show use to conceal their identities. As throwback pop music plays, a big-screen TV runs episodes from past seasons of the show above the bar.

The specialty cocktails, which range in price from $8 to $12, are all “Game of Thrones”-themed. The drinks, with names like Winter Has Come and Dragon Fire, span a wide variety of tastes. The Yinzerfell is a sweet mix of Smirnoff vodka, honey, lemon and green tea. Ned’s Dead is drier, with a layer of merlot atop a mix of Smirnoff mango vodka, pineapple and passion fruit. Bar of Thrones also offers various beers and wine.

Shane Wilps, beverage manager at MW Hospitality and bar manager for Bar of Thrones and the other pop-ups, crafted the cocktails with Westeros in mind.

“A lot of the inspiration for the drinks was kind of two different tones. You wanted to keep simplicity just for speed of service. Additionally, aesthetics, I think, were a large inspiration,” he said. “I wanted them to look cool, and then I just wanted to make stuff that was summery, light and fresh and everyone would enjoy.”

At each pop-up in this location, some of the profits are donated to a chosen charity. Profits from sale of two of the themed cocktails — The Bastard and the Dragon Fire — will be donated to I Carry My Sister’s Heart, which provides support for families dealing with cancer. The nonprofit was started by Pittsburgh local Jennifer LaFace.

“I feel truly blessed that I Carry My Sister’s Heart has been designated to receive a portion of the proceeds from the ‘Game Of Thrones’ pop-up bar,” LaFace wrote via email.

According to Wilfinger, the Jingle Bar pop-up raised $4,000 for the Alzheimer’s Association, and he expects the donations to I Carry My Sister’s Heart from Bar of Thrones to exceed that.

“With the drinks that we sold over the last five days, I think [LaFace] will be happy with what we present to her,” Wilfinger said.

Bar of Thrones will be in Market Square until the end of “Game of Thrones’” season 8 on May 19.