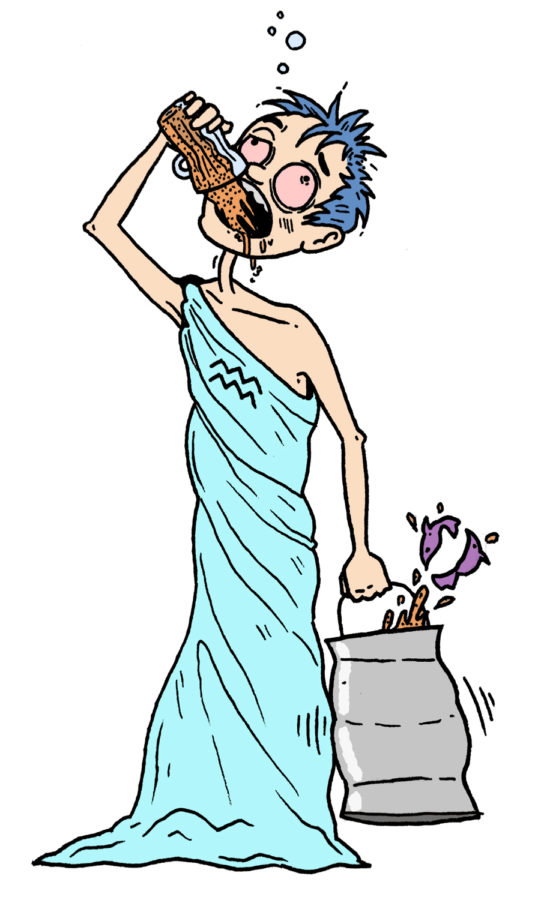 It’s easy to have a hard time figuring out the right drink for you. Why not bring the stars to the bars? It’s time to let your sign determine your drink order.

Aquarius (Jan. 20-Feb. 18): Moonshine. You’re homegrown. Grassroots. Innovative. Even a little rebellious. Your standoffish and blunt nature can freak some people out, but that’s also part of your charm. And of course, we can’t forget the raw Aquarius energy exhibited by the show “Moonshiners,” a Discovery Channel docuseries featuring a backwoods southern man named Tickle and his crew roaming around Virginia. So if moonshine isn’t big Aquarius energy, I don’t know what is.

Pisces (Feb. 19-March 20): Absinthe. You go with the flow, Pisces, letting your emotions and spiritual connections take you wherever they please. You live in your own world, ebbing and flowing like the ocean, deeply connected to your subconscious. Absinthe, also historically known as la fee verte — the green fairy — brings out your dreamlike, almost magical demeanor. This mysterious liquor is perfect for a romantic, occasionally dark soul like yours.

Aries (March 21-April 19): Fireball. You’re spicy. A firebreather. You’re ready to yell at someone while sitting on the suspiciously wet counter of a South Oakland kitchen at a party you just wandered into. And you know what, you’re probably still going to be fired up when you’re sitting on Towers patio eating fries and cheese from The O. But that’s just you, Aries. You’re powerful and warm, but sometimes hard to take, just like the college student’s favorite cinnamon whisky.

Taurus (April 20-May 20): Beer. I hate to break it to you Taurus, but you can be a little bit basic, or maybe I should say … classic. You like what you like and are too stubborn to deviate from that choice, and to some extent your dedication is admirable. When you walk into a party you know your drink will be present because, frankly, everyone loves cheap, carb-filled alcohol, just like they love you and your carb-filled self.

Gemini (May 21-June 20): Tequila. As the communicator of the zodiac, you’re great at parties. You’re social. You’re great amongst a group of good friends or even just with the lone person sitting on the ratty couch. And you’re at your best when taken quickly. We all love you for it, Gemini. But tequila’s an abrasive flavor, famous for turning sour and leaving a bad taste in people’s mouths, just like you.

Cancer (June 21-July 22): White wine. You’re emotional to the extent of being moody, and to me, it makes sense that you’re the official drink of reality TV housewives ready to snap any minute at some woman named Heather. But like white wine, that’s only one side of you. You’re also the drink to pair with a lovely seafood paella as you watch the ocean from your veranda. You embody the ups and downs of living an emotionally driven life, just like white wine.

Leo (July 23-Aug. 22): Champagne. Ruled by the sun, you’re effervescent, charming, dramatic. You’re the star of the show and you know it — really, your ego wouldn’t have it any other way. You shine in social situations because of your natural charisma and warmth. You’re raising your glass from your opulent, new money house in West Egg at a party you threw to impress a singular person, because, just like champagne, you’re absolutely extra.

Virgo (Aug. 23-Sept. 22): Whiskey. You’re neat, practical and organized. You expect perfection from your liquor and are willing to wait for it. But, just like the majority of men I’ve met who stake their whole personality on drinking whiskey, you can be a bit boring and maybe too predictable. It’s the drink of people who are here for a long time, not a good time.

Libra (Sept. 23-Oct. 22): Vodka. A party drink. Versatile. An undecided yet balanced taste enhanced by any mixer. A liquor most people enjoy in some capacity. Libra is the sign most likely to scoop their drink out of a Sterilite storage container with a cup floating in it, just to have something to hold while wandering around the basement during a rager — and vodka is the liquor most likely to be in that storage container. However, you’re also a little petty, Libra — you’re probably one of the most likely to throw a vodka soda at someone at the bar for giving you a look you don’t like.

Scorpio (Oct. 23-Nov. 21): Red wine. Passionate. Deep. Alluring. Sometimes a little dry. It looks like the blood of the freshly slain man who had the absolute nerve to ghost you. It’s the drink in your hand while traipsing through a white marble mansion in a black silken robe as the authorities investigate your latest husband’s death. It’s the hardest stain to get out of your favorite white shirt. Red wine has undisputed Scorpio energy.

Sagittarius (Nov. 22-Dec. 21): Gin. Eccentric. Adventurous. Kind of piney? Even ordering it sounds like some kind of adventure into a different land. It’s as fun as John Mulaney ordering fries for the table. Gin is also reminiscent of blunt, clear honesty — almost to a fault, just like you, Sagittarius.

Capricorn (Dec. 22-Jan. 19): Scotch. You’re refined. Disciplined. Responsible. The adult in the room. The friend who’s also the parent who tells you to drink water and not even think about texting your ex “hey” followed by four y’s and, dare I say it, that one emoji with the eye closed and the tongue sticking out. The Capricorns of the world truly keep the rest of us out of trouble.