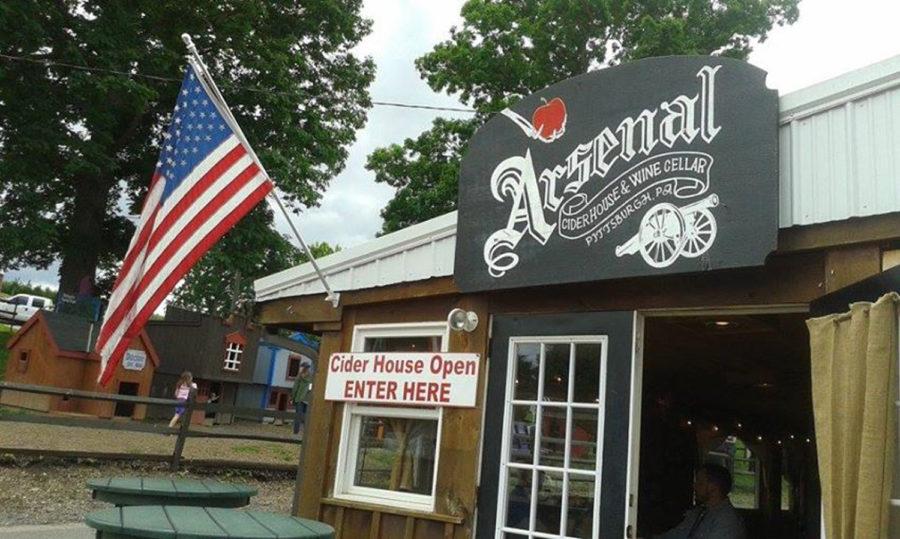 The orchard is located about half an hour north of campus in Wexford, where its seven types of apples are pressed to release their delicious juices in order to be turned into apple cider.

While Arsenal’s hard cider can be found on tap and in cans at a few local bars, to find a particular seasonal flavor, it’s best to visit one of the official locations. Arsenal has cider houses on location at Soergel Orchards and Trax Farms in addition to its stand-alone brick-and-mortar store on 39th Street in Lawrenceville.

Upon entering what is easily mistaken for someone’s family home — which it used to be — guests are greeted by a rustic Civil War-era interior and a dozen varieties of hard cider on tap, which range from a traditional sweet apple flavor to a dry red wine-like blackberry selection.

The location is celebrating nine years of operation in June, and like a fine wine, Arsenal’s age only brings new and exciting changes.

According to co-owner Michelle Larkin, around this year’s upcoming Cinco de Mayo celebration, Arsenal’s Lawrenceville location will unveil a kitchen so patrons can gorge on some snacks other than pretzels while they imbibe their drafts or growlers. Right now, while the weather is warming up, Arsenal and its outdoor patio regularly get swarmed with thirsty customers.

“We’ll be so busy from April to October, but you’ll be able to know it’s January, not because it’s snowing, but because we’re not as busy,” Larkin said.

The cider house takes its “arsenal” moniker from adjacent Arsenal Middle School, which was built on the site of a U.S. arsenal by William Barclay Foster, who founded Lawrenceville. Thus, Arsenal Cider House takes on an old-time war-themed interior — an aesthetic it also incorporates on its to-go bottles.

Any cider on tap can be bottled in a resealable growler, adorned with a label allocating the “daily rations” to whoever’s name is on the bottle — plus their own (pretend) military ranking. Larkin said this was inspired by troops in the arsenals who decided to drink their daily rations in the trenches too quickly.

“If any kind of battle broke out, they were [already] inebriated!” she said.

If Larkin is ever looking around the taproom sentimentally, it might be because the bar and its seating is located in what used to be her and her husband’s living room, kitchen, game room and dining room. But as of last year, the Larkins don’t reside above the cider house anymore.

With three kids — 10-year-old twins and a 15-year-old — the Larkins created their business to still work while also spending time as a family. Coincidentally, the cider house is also family-friendly, so babies, dogs and even parrots are welcome to enjoy the warmth of Arsenal’s outdoor patio.

Even in the colder months, the patio is still available and can be heated, so ciders with a winter feel can be enjoyed with a view. Since it’s a year-round beverage, hard cider can allow for a ton of variety in its flavor profiles. It can be sweet, sour, spiced, fruity, floral or basically take on whatever flavor is imparted into it. For 2013 Pitt graduate Liz Nieters, that’s an important quality in her beverages.

“I’m not a huge beer drinker, so the one cider [at most bars] is all there is for me,” Nieters said. “I like ciders that have a different kind of fruit infusion in them.”

As Pittsburgh increases its craft beer presence, ciders on tap can be hard to find. Having dedicated cider houses provide a place for folks who need to know that a gluten-free beverage option will be available for them.

For Dayton, Ohio, native Scott Corl, Arsenal Cider House’s reputation for excellence — like its 4.8-star rating on Google — is what brought him to the cidery.

“It may have been the first cider place I was told about when I came to Pittsburgh,” Corl said, laughing and sipping on a dark blackberry cider. “I just love blackberry [flavor]!”

“They sample other stuff but when push comes to shove, they want the original,” she said.