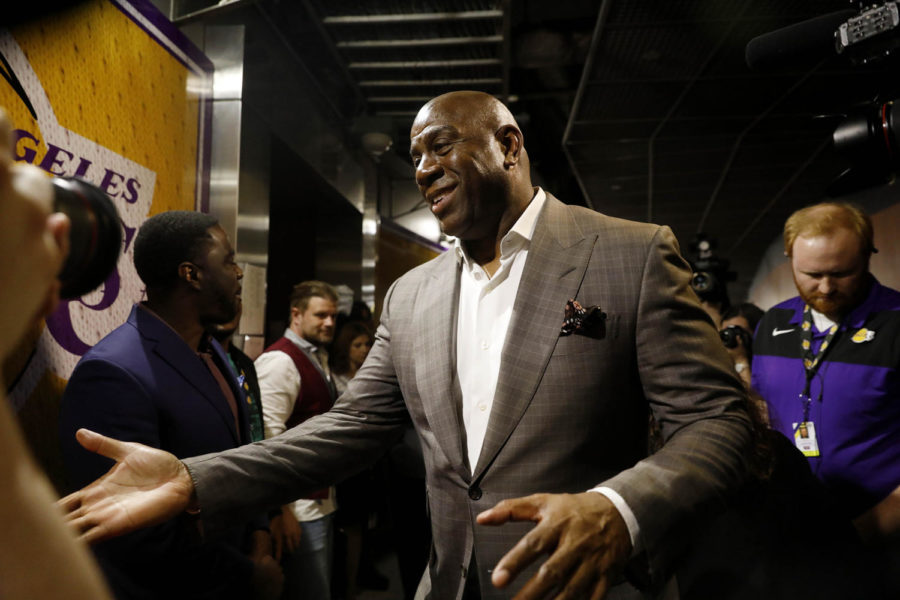 Earvin "Magic" Johnson steps down as the Los Angeles Lakers' president of basketball operations at Staples Center in Los Angeles on Tuesday, April 9.

Former Steelers wideout Antonio Brown drew the ire of Pittsburgh fans, fellow NFL players and the general public at large this past week with a controversial tweet at ex-teammate Juju Smith-Schuster. In other news, Lakers president Magic Johnson stepped down from his position in an impromptu press conference, while the Red Sox continue their head-scratching sour patch. Here’s The Pitt News’ sports staff’s hottest takes of the week.

Antonio Brown is Off The Rails

What is going on in Antonio Brown’s head?

When the Pittsburgh Steelers traded Brown to the Oakland Raiders after a tumultuous situation, it didn’t seem like it was possible for Pittsburgh fans to dislike a player more than the dramatic star wide receiver. A month later, AB has made the situation even worse.

After Pittsburgh’s young, rising receiver JuJu Smith-Schuster posted a supportive tweet of Steelers quarterback Ben Roethlisberger, many took it as a veiled shot at Brown, who has openly criticized Roethlisberger’s leadership recently. Brown responded with another subliminal post that implied Smith-Schuster simply wanted to increase his chances of landing a big contract with the organization with his support of Roethlisberger.

Do not listen to any NFL player who haven’t got paid yet! They will do and say anything to make sure they going to get paid even if it’s compromising integrity or anything ! sad but true

He didn’t stop there. After a fan trolled Brown with a graphic mentioning that Smith-Schuster was voted by the Steelers players as the MVP of the 2018 season, Brown responded with an immature low-blow about Smith-Schuster’s late fumble in a crucial regular season game against the Saints, saying he “fumbled the whole post season in the biggest game of the year!”

Emotion: boy fumbled the whole post season in the biggest game of year ! Everyone went blind to busy making guys famous not enough reality these days ! 🤙🏾 by the way check the list https://t.co/2SWWT8k0jx

Steelers fans immediately came to Smith-Schuster’s defense, showing where their loyalties lie. Smith-Schuster issued a classier response, pointing he had always supported Brown and that he must have a huge ego to say something like that. It wasn’t just Steelers players and fans coming to Juju’s defense — Houston Texans safety Justin Reid tweeted, “I respect [Brown’s] game but I can’t wait to smash this dude.”

That’s when Brown decided to post on his Instagram a since-deleted screenshot of a direct message Smith-Schuster had sent to him. In the message, Smith-Schuster introduced himself as a USC receiver looking for tips to take his game to the next level. It’s unclear what Brown’s intentions were with the Instagram post. Maybe he thought he was “exposing” Smith-Schuster. But all this screenshot did was confirm Smith-Schuster’s image as a humble, hard-working individual.

There had been a lot of speculation in the past that Brown was jealous with his teammate’s immediate success, and now it is even more clear. Brown has made himself look immensely immature, and it’s temporarily made Steelers fans forget about their previous least favorite player — Le’Veon Bell.

Magic Johnson abruptly stepped down as president of the Los Angeles Lakers — where he was a star point guard in the ’80s — on Tuesday night. Why? He wanted to go back to “just being Magic Johnson.” His decision to step down will likely have major implications for the team.

LeBron James headed west last summer to return one of the NBA’s premier franchises to its former glory, but Magic’s departure has made it clear that LA’s return to dominance is far from guaranteed.

Playing under the Laker legend was part of the allure of joining the Lakers. Adding James greatly helped. Now Magic is gone and this season showed that LeBron likely can’t elevate the team without the help of another superstar. Without Magic running the show, why would another superstar want to come to LA?

The Lakers do have room for a max contract, but now there is a void at the head of the franchise. On top of that, stars like Anthony Davis and Kyrie Irving want to win — the Lakers failed to do that this year and are going in the wrong direction with turnover at the head of the organization.

Sure, he wasn’t the greatest president ever, but he was still Magic Johnson. But now he’s gone, LeBron is aging and it looks like the Lakers’ name might not return to its former glory for quite some time.

Pitt Athletic Director Heather Lyke has been at the helm of her department for over two years now, coming on board in March 2017. In that span, she has had one of the most impactful stretches of any AD at any major university in recent memory.

Lyke took over a Pitt athletics program that was in ruins and needed a reset after a transition to the ACC in 2013, which took a toll on nearly every sport. Lyke took no prisoners, creating massive turnover in the department, having already hired seven new coaches in her short time. On top of that, she extended the contract of head football coach Pat Narduzzi, who responded by leading his team to an ACC Championship game this season. Additionally, Lyke plans to add a women’s lacrosse program in the 2020-21 academic year while making the corresponding move of dropping women’s tennis at the conclusion of this season.

Lyke is active on the business side as well as the athletics side, beginning the process of Pitt’s recent rebrand almost immediately after her tenure began as the new AD. She secured Pitt a spot with Nike’s lucrative Global Identity Group, which only rebrands a few universities per year and executed Pitt’s successful reversion back to the iconic royal blue and yellow color scheme.

Despite all of this, Lyke still found a way to have even bigger plans in the work. Her “victory heights” project is still in the works. This plans to take Pitt’s upper campus athletic buildings and modernize them, creating a complex for Pitt athletics which puts them all in one building and allows for experimentation into sports science with the University’s student athletes. It’s all quite  ambitious and Lyke knows it, which is likely the root of her unwillingness to put a timeline on things. However, if her short tenure has indicated anything so far, don’t doubt Lyke.

The defending World Series Champion Boston Red Sox are off to an atrocious start to their 2019 season. After coming off a 2018 season where the team won a franchise-record 108 games, the Red Sox currently sit with a 3-9 record. This puts them last in the American League East, seven games back from the leading Tampa Bay Rays.

Superstar right fielder and 2018 American League MVP Mookie Betts has gotten off to a slow start, batting .255 with 10 strikeouts in 47 at bats so far. This is a small sample size and we should be seeing Betts getting more hits and less strikeouts in due time.

Batting isn’t the main issue for Boston right now, though — that would be pitching. The Red Sox’s bullpen coming into the season was nothing special and they are just slightly underperforming. The starting rotation, on the other hand, is playing at a level far below expectations.

Red Sox ace Chris Sale is off to one of the worst starts in his career. The seven-time All-Star is 0-3 with an unsightly 9.00 ERA. David Price, Nathan Eovaldi and Rick Porcello also have ERAs north of 6.00. The pitchers have given up 71 runs in 100.2 innings so far, yielding a team ERA of 6.35.

Despite the slow start from the entire team, Boston fans shouldn’t panic. This is the almost the same roster which won the World Series last year, and it should still be favored to win the American League East with around 93-95 wins. The one thing that the Red Sox can be thankful for is that the New York Yankees have also stumbled out of the gates with a 5-7 record.

The bats will heat up, the pitching will revert back to normalcy and the Red Sox will be in the postseason come October looking to repeat as World Series Champions.

The NBA Draft on June 20 is approaching quickly. The new rules established by the organization last year — regarding the way a basketball player can “test the waters” of the drafting process — is causing an increase in the number of predicted draft orders.

The updated policy allows players to be represented by an agent who is associated with the NCAA or NBPA. If they choose to forego the draft, they must immediately cut ties with their agent and can return to school without losing any credits. Agents are permitted to pay for food and transportation for both the player and his family during the selection process.

Familiar faces from the March Madness tournament are planning to enlist in the draft. These players include UNC’s Nassir Little, Washington State’s Jaylen Nowell and Oregon’s Bol Bol. Even Duke’s Zion Williamson likely played his last basketball game as an NCAA player at the end of March.

So far, the New York Knicks, Phoenix Suns, Cleveland Cavaliers and Chicago Bulls hold the top four positions in securing a number one pick overall. The Suns are projected to snatch Williamson, although the Knicks and Cavs have a close chance as well.

The Cavaliers may score Jarrett Culver of Texas Tech, who generated buzz with his promising skillset. Culver totaled 704 points at Texas Tech this season and would be a great asset for Cleveland.

Virginia sophomore De’Andre Hunter’s versatile playing style and strong defense could also land him a selection near the top. He is the ACC’s only qualified player to shoot over 50% from the floor, 45% from behind the arc and 80% from the stripe. Kyrie Irving was the last NCAA player to record 50/45/80.

The NBA came prepared in sending dozens of scouts to prospective schools across the nation. The draft remains unpredictable and will result in a handful of players who want a shot at going pro. Michigan’s Jordan Poole decided to join the draft, but delivered inconsistencies during the season. He is one of many players who could return to college if no teams express interest.