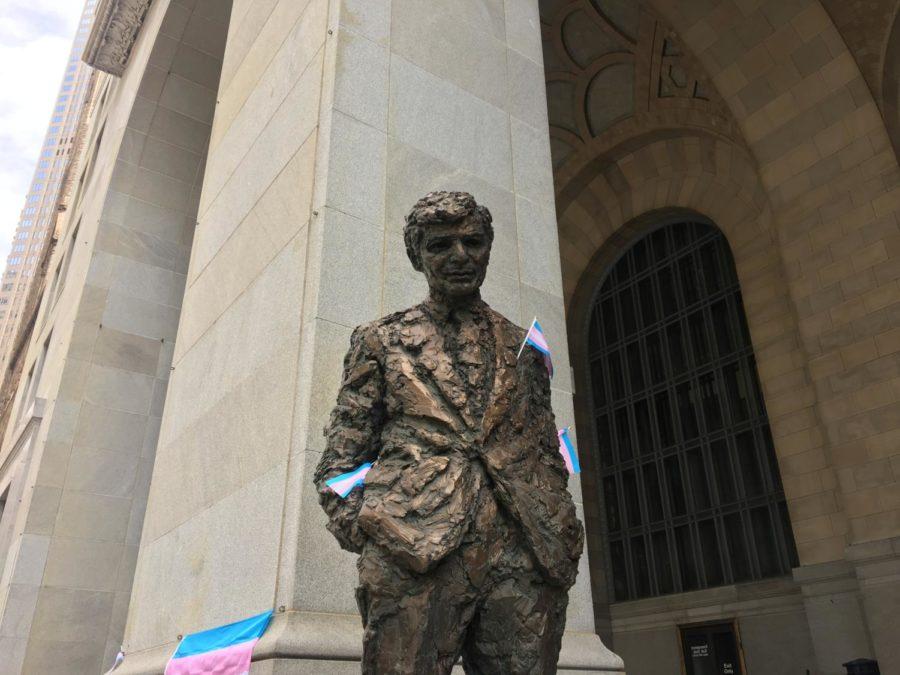 Surrounded by supporters with signs reading “I support transgender service members” and Make America Gay Again hats, Elliot Sommer, a transgender man in the Army Reserves, spoke out about his right to continue serving his country.

“I could not help but wonder, ‘Why do I keep fighting to stay in uniform where I have to maintain integrity and professionalism, when we as a class of citizens are not even wanted?’” Sommer, a graduate student in neuroscience at Kent State University, said.

Sommer was one of many speakers at Saturday afternoon’s Fight the Ban rally outside Pittsburgh’s City-County Building downtown. The rally, which gathered a crowd of about 40 people, was organized by Steel City Stonewall Democrats, TransPride Pittsburgh, OutServe-SLDN and Minority Veterans of America, and was one of many rallies held across the country on Saturday.

The organizations hosted the rally in response to President Donald Trump’s ban on transgender people openly serving in the military the day before, after announcing his intent to do so over Twitter in July 2017. Many have called the ban a return to the era of “Don’t Ask, Don’t Tell,” the 1994 policy that barred LGBTQ+ people from being open about their sexuality or gender identity while serving in the military.

Chance Thomas, a transgender former Navy police officer who was tried under “Don’t Ask, Don’t Tell,” told the crowd he is confused by the ban on transgender people serving in the military, noting that he believes transgender people in particular are highly qualified to serve.

He said his personal experience in the military solidified this viewpoint.

Nathan James, the vice president of LGBTQ Affairs at My Brother’s House, a nonprofit in Philadelphia that provides housing to LGBTQ+ veterans, called for people to be active in the fight to lift the ban.

“We look to our people in uniform, whether he, she, they or ze, to protect our cherished republic and keep us safe from our adversaries while we blissfully go about our daily lives,” James said. “They have earned the right over, and over, and over again to do so in their true, authentic, correct, gender identity as our culture of freedom would allow, but for the reversing of those rights today.”

Bethany Hallam, a progressive Democrat running for the at-large Allegheny County council seat in the May primary, used her speaking opportunity to discuss other issues facing the transgender community in Pittsburgh.

She discussed what she called the “psychological torture” that transgender people, and particularly transgender people of color, face in Allegheny County Jail when they are placed with their assigned sex at birth. She called for the firing of jail warden Orlando Harper — on whom she blamed the housing of transgender people in jail — and an overhaul of the criminal justice system to avoid this misgendering.

Calvin Eckers, a first-year Pitt student studying social work and sporting a shirt that read “Trans rights are human rights,” said while he is not in the military, he attended the rally to support the right for transgender people to serve. He said he hopes the rally is the first of many steps in the fight to lift the ban on transgender troops.

Nathan Porter, a chapter leader for OutServe-SLDN, introduced all of the speakers at the event. In addition to organizing the rally, he’s also lobbied Congress to pass legislation to repeal the ban, saying that the organization met with 70 legislators just last week.

“If we get enough people on board, Congress can step in and basically force the military to stop the ban,” Porter said.

Porter said there are some Republican senators who he believes are on the fence about voting against the ban, and added that he’s confident their lobbying effort will be successful.