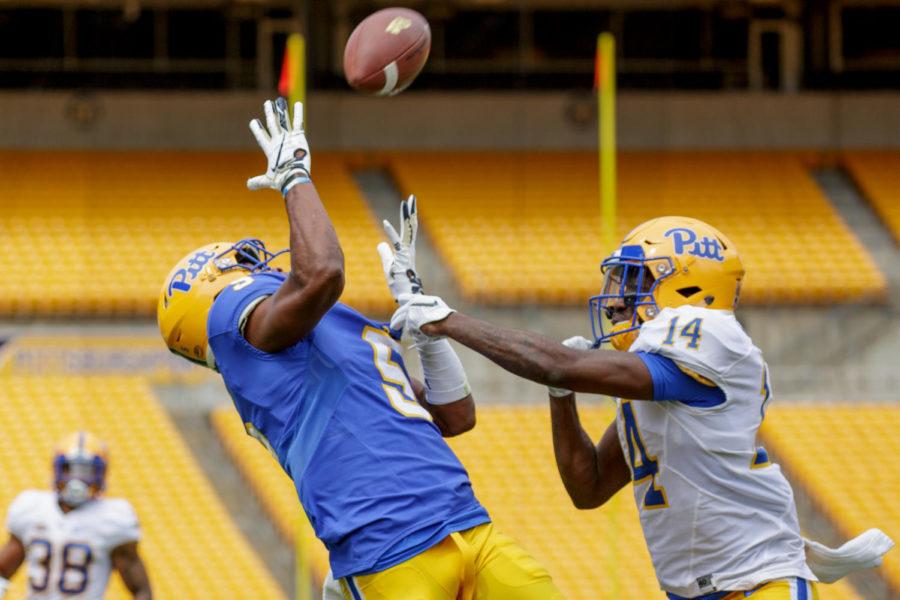 On Saturday afternoon the first football game of 2019 was played on Heinz Field turf. Granted it was an intrasquad scrimmage without kick or punt returns, full quarters or hits on the quarterback, but it was a game nonetheless.

Just under 9,000 fans made their way to the North Shore to watch the 2019 iteration of Pitt football’s annual Blue and Gold game. On a picturesque spring day, the Blue team secured a 14-7 victory on the strength of junior quarterback Kenny Pickett’s two touchdown passes.

With former Pitt greats Aaron Donald and LeSean McCoy looking on as honorary captains, the Gold team won the coin toss and took the ball to open the first quarter.

The Gold offense was stymied on its first drive after junior running back AJ Davis was held in check on a third down run by the Blue defense. It was a frustrating afternoon for Davis, who figures to play a major role in Pitt’s rushing attack this fall. He was limited to only six yards on nine attempts.

After a historically prolific rushing attack just a season ago, both the Blue and Gold offenses steered clear of the ground game. Both teams ran the ball only 16 times a piece and netted an abysmal -32 yards.

First-year offensive coordinator Mark Whipple expressed faith in the running game despite Saturday’s disappointing results. He didn’t believe Saturday was an accurate representation of how good the run game will be come August.

“You don’t have everyone together,” Whipple said. “That’s the way it always is in the spring… I’m not going to sit up here and say ‘We lost a lot of guys up front and two really good running backs and changed the scheme,’ because [my teams] have gotten better as the year goes on… Right or wrong that’s just always how it’s been wherever I’ve been.”

But in the first open viewing of Pitt’s new offense against live competition, it appeared that Whipple flipped the script from a season ago. The passing offense, which was one of the most heavily criticized facets of last year’s team, shone on Saturday in place of the destitute run game.

Junior quarterback Kenny Pickett, who has so far failed to live up to his post-Miami-upset hype, was smart and efficient in his four drives of work. He finished 10-14 for 125 yards and a pair of touchdowns, both to redshirt senior receiver Tre Tipton.

Pickett showed a more diverse skill set in his third spring game appearance. He was poised in the pocket and made throws all over the field, while also using his legs to avoid pressure and scramble.

The weight of last season’s struggles were seemingly nonexistent for Pickett when he gushed about the freedom his new offensive coordinator has allowed.

“[Whipple] just let me loose,” Pickett said. “He wants me to go out there and have fun and play my game and I think you saw that today. Running around a little bit, staying in the pocket, throwing it. That’s what I think I really got back to this spring, just being myself and letting it fly.”

While Pickett fueled the Blue team offense, the defense was outstanding in its own right.

The Blue team defense was anchored by strong play from one of the the spring session’s Conway award winners for most improved players, redshirt sophomore safety Paris Ford. Ford led his unit with seven tackles and added a diving red zone interception that earned a hug from Aaron Donald upon returning to the sideline.

Ford has spent most of his first two seasons at Pitt on the bench, but head Coach Pat Narduzzi assured Pitt fans that Ford is ready to take advantage of this opportunity.

“Right now, Paris Ford is a starter,” Narduzzi said. “He’s a football player. One of the main reasons that he got [the Conway award] is because he’s fast, he’s always been physical, and he’s always been a playmaker. That interception is just what you see all the time.”

Other notable performers included first-year quarterback Davis Beville. Beville, who enrolled at Pitt in January as one of the 2019 class’ centerpiece recruits, went 13-17 passing for 157 yards and the Gold team’s only touchdown. That score came late in the fourth quarter and capped an eight-play, 59-yard drive in under two minutes to cut the Blue lead in half.

Sophomore running back V’Lique Carter, who has made multiple position switches since his arrival at Pitt, made an impact on both sides of the ball. He caught a pair of passes and collected four tackles in his return to the cornerback position, which Narduzzi recruited him as. Narduzzi also said to expect more of “The Freak” on both sides of the ball during the regular season.

Carter’s classmate, sophomore receiver Shocky Jacques-Louis is looking to stand out in a crowded receivers room, and Saturday was a good first step for the speedy second-year player. Jacques-Louis caught three balls for 51 yards in a defeat for his Gold team.

Spring practices and the Blue-Gold game provide a temporary respite for football-starved fans during a long break. But now comes the true offseason.

Pitt players will not return for official practices until August and the 2019 season opener won’t be played until the final day of August. But for now fans are left with the words of Jacques-Louis tempting promise: “That was nothing compared to what y’all are going to see in the fall.”