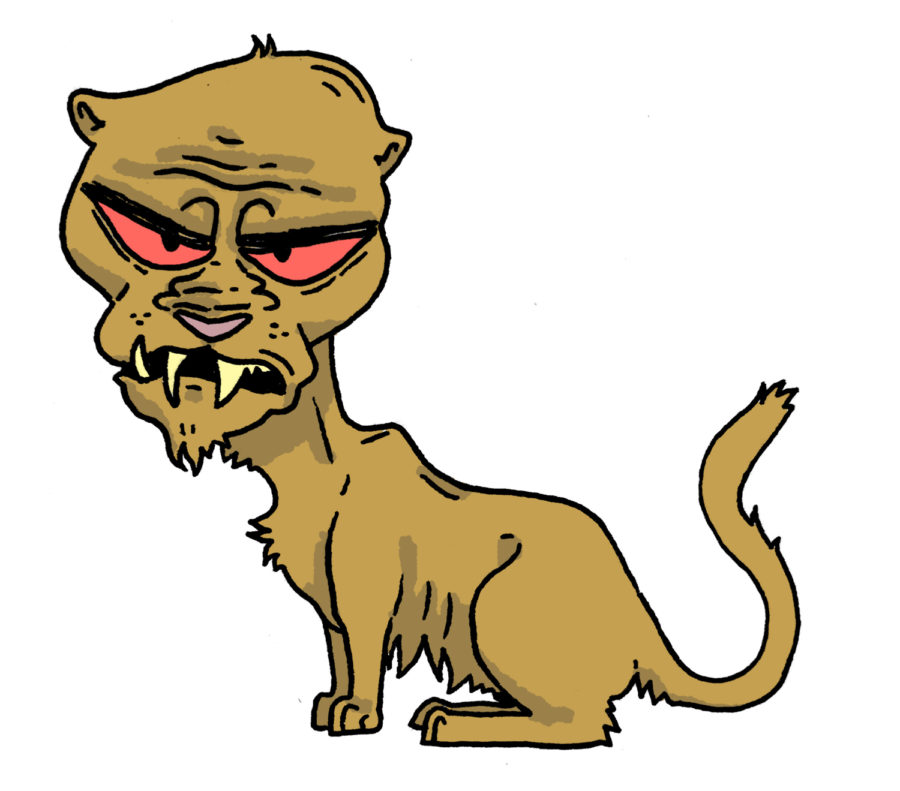 Pitt Athletics revealed the results of their latest rebranding campaign last week at Bigelow Bash. These new uniforms — with a bold and bright color scheme — truly knock it out of the park. In addition to the new uniforms, Pitt also revealed a new Panther logo that strikes fear not only in the hearts of the competition but students as well. While our beloved Pittsburgh Panther is now a little more “Nightmare on Elm Street” than “Mr. Rogers’ Neighborhood,” it is definitely not the scariest thing in Oakland this time of year. Here are 10 things even scarier than Roc’s new look.

As a first-year student, a fundamental part of my year at Pitt has been braving the highs and lows of a Pitt dining plan, the lowest of lows being not one, but two failed health inspections this academic year. Thankfully, it passed Tuesday — but nothing sends shivers down my spine like lukewarm tofu.

Assertive flock of pigeons and squirrels on Fifth

As the gray winter fades into a slightly less gray spring, I occasionally choose to opt out of my beloved Port Authority bus ride to enjoy a nice walk down Fifth Avenue. How lovely is it that a flock of pigeons and group of squirrels are always there to aggressively chase me off that little patch of grass between Oakland and Bouquet. Sometimes swarming moldy pieces of bread, sometimes chowing down on an old Five Guys bag, and sometimes just giving me a little nod as if to say “what’s new?” These ferocious creatures never fail to claim their place on campus.

Speaking of Pitt, all of the uniforms say Pitt. The flags say Pitt. The classic gray sweatshirt I received from three different people as a graduation gift says Pitt. Who in their right mind is elongating an abbreviation of the school’s name? UPitt is the equivalent of referring to J. Lo as Jenny Lo.

Spring has sprung in Oakland … only for the temperature to drop right back below 50 degrees a week later. Sure, when we get a day that’s 70 and sunny, bust out the old Chacos and basketball shorts! But no one wants to come face-to-face with exposed calves turning purple because you’re ‘tanning’ in Schenley Plaza on a windy, 40-degree day.

Having to use a crosswalk to cross Forbes

Nothing prepares Pitt students for an hour-long lecture in Lawrence Hall quite like the adrenaline rush from racing across Forbes Avenue as a car comes speeding towards them. The threat of being pummeled by a truck at any second is a rite of passage for students. However, the new crosswalk and increased enforcement of traffic laws force Pitt students to forgo the classic Forbes Dash and wait on the sidewalk for a green light to begin a mundane stroll across the crosswalk. Rest in peace, Forbes Dash. Though you terrified us, we will not forget you.

The Ghost of Popeyes

Across the street from one of the nation’s best hospitals, UPMC Presbyterian, lies another great: Popeyes Louisiana Kitchen. After an abrupt closing in February, the barren shell of a Pitt staple lies vacant on Fifth. What caused Popeyes to close without warning? Why leave without saying goodbye? Rumor has it, if you walk by after dusk, you can still hear the sizzle of fried chicken and the faint call of those buttery biscuits. Beware!

Port Authority buses in the rain

The cold, rainy, soggy City of Bridges forces students to brave all kinds of unpleasant weather. Pitt students are no strangers to long walks in torrential downpours. On these treks to 8 a.m. chem labs or late-night adventures into South O, no sound strikes more fear into our hearts than that of a rapidly approaching Port Authority bus. While hightailing it down Fifth, buses on both sides of the street are there to shower you with some authentic Pittsburgh puddle water.

In preparation for the upcmoing semester, I had my courses planned weeks before my designated enrollment time. I had backups and even backups for my backups. This semester, things were a little different. As if I were Shelley Duvall in “The Shining,” I had my own “Here’s Johnny” moment when my enrollment date and time rolled around, and I had not one idea what to take … or what was even open for me to enroll in. Looks like I’ll be spending my afternoons in Basket Weaving 101. Empty Enrollment Shopping Cart: 1, Julia: 0.

Random assortment of “goodies” lying on the streets of South O

Need something to spice up your final week of the semester? Boy oh boy does South Oakland have just what you’re looking for! Four crushed cans of Natty Light, a pair of underwear and a CVS bag filled with a mysterious liquid. South O has all the random, disturbing and bewildering objects you could ever dream of!

Oh, how I long for January, when my 30-page essay due on April 19 seemed like some distant nightmare. Glancing over my once meticulously organized calendar, in which calligraphy and hand-drawn monthly mood trackers have been replaced by frantic scribbles and mindless doodles, I find the week before finals is anything but the respite from work it was designed to be. Standing in the way of my four months of summer lies the daunting tasks of writing four essays, taking three exams, completing two chapters of problem sets, finding a cure for cancer and flying solo across the Atlantic. Good luck and godspeed, my fellow Panthers.