Does Pitt have a case for Running Back U? 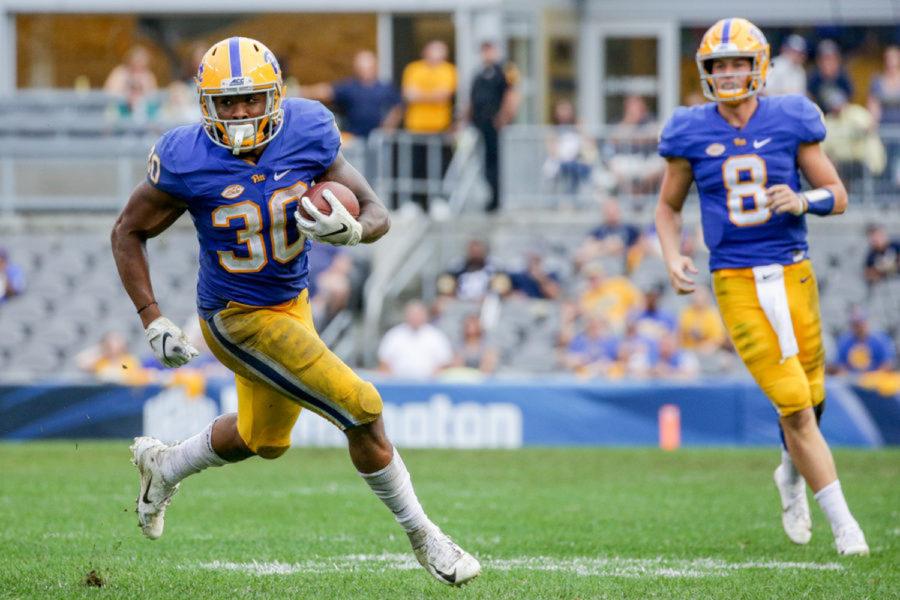 Former Pitt running back and 2018 leading rusher Qadree Ollison made an appearance on NFL Network’s “Good Morning Football” show Tuesday morning to discuss his view that Pitt is RBU.

Former Pitt running back and 2018 leading rusher Qadree Ollison made an appearance on NFL Network’s “Good Morning Football” show Tuesday morning. Ollison, a 2019 NFL Draft prospect considered the 27th best at his position by NFL.com, used his platform to discuss, among other things, his view that Pitt is the definitive running back university.

“I don’t see another university producing in college and the NFL at a high level,” Ollison said. “So, that’s why I say Pitt is RBU because we produce them on both levels, not just college.”

Is @Pitt_FB the real Running Back [email protected] thinks so.

“You don’t see another university producing at a high level in college and in the NFL” pic.twitter.com/mcX1gjXexK

The phrase “RBU,” or running back university, has been used to describe several other schools known for producing talented backs, chiefly Oklahoma, Georgia, Alabama, Miami, LSU, USC and Wisconsin.

During his televised segment, Ollison gave a pretty convincing argument where he listed all of Pitt’s running backs who had success in college and went on to have fruitful NFL careers, including Tony Dorsett, Curtis Martin, LeSean McCoy, Craig Heyward, Dion Lewis and James Conner.

That’s pretty elite company for a few reasons. Since the modern era of the NFL began in 1967, 32 running backs have been selected to the NFL Hall of Fame. No school has produced more inductees at the position than Pitt, with Dorsett being selected in 1994 and Martin in 2012. It’s pretty safe to assume that McCoy will also be enshrined in Canton once his career is over. A quick glance at the top 25 rushers in NFL history reveals more Pitt alumni than any other school — Martin is fifth with 14,101 yards, Dorsett is 10th with 12,739 yards and McCoy is 25th and climbing with 10,606 yards.

From a historical precedent, Pitt has a reasonable claim as the most elite producer of professional talent. One notable competitor would be Notre Dame, which boasts a pair of 10,000+ yard NFL rushers in Jerome Bettis and Ricky Watters. The only problem is that many of the Fighting Irish’s other top rushers, like NFL Hall of Famer Paul Hornung and Nick Pietrosante, racked up their yards before the NFL-AFL merger in 1966, making many of their professional numbers outdated.

USC also has a pair of Hall of Fame running backs in Marcus Allen (12,243 yards) and OJ Simpson (11,236 yards), but lacks a relevant third wheel like LeSean McCoy. There’s a significant drop-off in production after that duo, with USC alumni Reggie Bush, Mike Garrett and Sam Cunningham all hovering around the 5,500-yard marker.

Only two schools can truly challenge Pitt’s NFL backfield production from a historical view — Texas and Miami. The Longhorns have just one 10,000-yard rusher to their name in Ricky Williams, who eked onto the list with 10,009. But they boast an impressive amount of depth, with former Pro Bowlers Earl Campbell, Priest Holmes and Jamaal Charles all accumulating more than 7,000 yards each, with Cedric Benson adding in 6,017 of his own. This group doesn’t hold a candle to Pitt’s top three, but you’d be hard-pressed to find a deeper pool of successful running backs who all came from the same school.

But when it comes to producing high-caliber NFL running backs, it’s evident that both Pitt and Texas must acknowledge Miami as king. Like the Panthers, the Hurricanes have seen three of their backs go on to gain 10,000 or more rushing yards at the next level — Frank Gore (14,748 and counting), Edgerrin James (12,246) and Ottis Anderson (10,273). Two other Miami running backs also came close to 10,000, with Clinton Portis and Willis McGahee rushing for 9,923 and 8,474 yards, respectively.

People are quick to forget about players once they retire, however, so another aspect of the RBU argument revolves around which school is currently the top producer of NFL running backs. Despite stiff competition from Alabama and Georgia, Pitt still holds up in this contemporary setting. LeSean McCoy is still chugging along for the Buffalo Bills, and is one of the NFL’s most elusive runners when healthy.

After bouncing around the league for a few years, Lewis found a meaningful niche with the New England Patriots, helping the team win Super Bowl LI in his role as a change-of-pace back. He became the team’s leading rusher in 2017, gaining 896 yards and averaging 5.0 yards per carry, which allowed him to sign a cushy contract with the Tennessee Titans last offseason.

But Conner is Pitt’s brightest backfield hope at the moment and the Panthers’ best argument at maintaining a reputation as running back university. After being drafted by the Pittsburgh Steelers and becoming a hometown hero after conquering Hodgkin’s Lymphoma in 2015, Conner broke through in a big way last season. With estranged running back Le’Veon Bell holding out the entire season due to contract disputes, Conner took the league by storm, rushing for 973 yards and 12 touchdowns while tacking on 497 receiving yards in just 13 games. With Bell now out of town, Conner enters 2019 as the workhorse in Pittsburgh’s backfield, and could have an outstanding career if he remains healthy.

While Pitt’s former backfield members still hold a presence in the NFL, there are a few other schools which have made a serious push at the RBU title in recent years. Georgia may be the one with the brightest future — three-time Pro Bowler Todd Gurley, Sony Michel and Nick Chubb all possess immense talent and own the keys to their respective backfields. Oklahoma can claim Adrian Peterson, currently eighth on the NFL’s all-time rushing list, as well as 2018 AFC rushing leader Joe Mixon. Successful Alabama backs can be found throughout the league, from Mark Ingram to Derrick Henry. The Tide also boast this year’s No. 1 and No. 2 backfield prospects, Josh Jacobs and Damien Harris.

All things considered, it seems that there are only two schools that can boast the depth, accomplishments and contemporary talent that Pitt has produced at the running back position: Miami and Oklahoma. Some schools produce backs that have outstanding college careers but don’t pan out at the next level (looking at you, Penn State), others are too tied up in ancient history (USC and Notre Dame) while others have burst onto the scene too recently (Georgia, Alabama, LSU). But with Miami’s loaded NFL resume and Oklahoma laying claim to two Heisman-winning backs (Steve Owens in 1969 and Billy Sims in 1978) in addition to multiple Pro Bowl appearances from Peterson, DeMarco Murray and Greg Pruitt, these two join Pitt on a short list of schools that can make the most well-rounded argument.

It’s all a matter of opinion, but the fact that Pitt is even in the discussion among schools with an overall superior program history shows just how much of a knack the Panthers have developed for creating star running backs. When asked on air if Ollison, Pitt’s seventh-leading all-time rusher, can continue the tradition, he confidently said yes. Hopefully, a team gives him a chance to put his money where his mouth is.