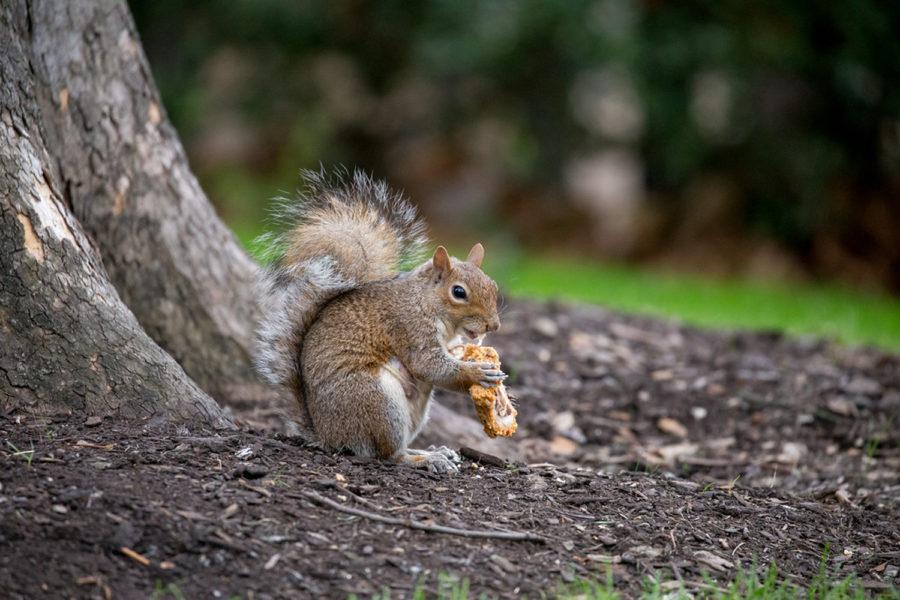 When finals season rolls around, it’s hard to not feel the crushing weight of the world on your shoulders. It’s hard not to see your GPA in physical form, beating you over the head for taking a “What ocean sponge are you?” quiz instead of paying attention to the lecture. But fear not! These thoughts can be banished with some good-natured humor paired with gentle dissociation from reality.

Write a few jokes about your mental state

Are you feeling your brain melt under the mounting stress of studying for the Chem 2 final exam? Or feeling yourself dissociating, floating through time and space while still being physically seated on the ground floor of the library writing that literature paper? Take those states of disarray and make them into a joke. Laugh at your suffering.

Instead of just saying you’re ready to give up while attempting to learn a whole semester’s worth of Bio 1, you could say you’re ready to abandon your old life, become a forest nymph from a Hozier song or possibly a troll that asks voyagers riddles to let them advance through their quests. Or even write an article for The Pitt News about easing the pain of multiple English papers by writing humor for others. Hey, it works for me.

Make it funny. Make yourself laugh. Make your friends laugh. Then shut up, put it on Twitter and move on. You have some serious studying to do.

Enjoy a couple of SNL skits

There’s nothing more motivating than seeing other people have fun in miserable situations. That’s why watching a few SNL skits for a morale boost is one of my secret weapons. They’re short. They’re quick-witted. And unlike every sitcom on Netflix, most people haven’t seen every episode five times.

I personally recommend Kristen Wiig’s “Target Lady,” Kate McKinnon’s “Close Encounter,” Andy Samberg and Chris Parnell’s “Lazy Sunday” and Bill Hader’s “Stefon.” Take some time out of your busy study schedule to watch comedians play characters who might be having a worse time than you. While exams are hard, they’re not as hard as Rachel Dratch’s Debbie Downer’s life, filled with mad cow disease and train crashes.

Imagine the craziest thing that could happen during finals — then write it out.

There’s a scene in “Harry Potter” in which Professor Lupin prompts his students to imagine their greatest fears — their boggarts — and teaches them to fight these fears by making their fears too silly to be afraid of. Neville pictures the menacing Professor Snape in his grandma’s dress and high heels, while Ron puts a giant spider in roller skates and watches it flail around.

Visualize your fear of finals and then make it look stupid. Do you fear your professor putting questions on the exam that you didn’t study for? Picture that same professor wandering around campus in a chicken costume, clucking through your lecture hall during the dreaded Saturday 8 a.m. final.

Do you fear sitting down at your computer to write a paper on the Haitian Revolution with absolutely no idea of where to start and the absolute foggiest idea of what the Haitian Revolution even was? Lean back in your spinny chair and picture yourself in the same situation as “Chopped,” running around the kitchen, questioning the imposing and usually broken ice cream maker as Ted Allen watches you and your antics with wonder before you finally settle on making a bread pudding.

Go out into the world and observe.

Peel yourself off of your chair in the library, take a shower and then wander through Oakland for a bit. And no, this isn’t about getting fresh air or exercising to get your brain back in the game — though both of those methods work wonders. It’s all about observing the world around you and all the stupid things that live in it.

See the Oakland squirrel in its natural habitat: balanced on trash, eating a Fig Newton cookie with a little too much boldness. Imagine its friend asking it to share. Imagine all the hardship the squirrel had to go through just to get a singular, sad Fig Newton. Mentally place yourself on top of that trash can. Feel the squirrel. Become the squirrel.

Sit on a bench and watch the Oakland pigeons shuffle around on the sidewalk before you. Watch the pigeons wander around, wobbling toward your sleep-deprived peers, who give the pigeons looks of absolute confusion while trying to navigate around such small, powerful birds. Look a pigeon in the eye. Do not blink. Tell the pigeon that you could take it out, 1v1 fight on sight. You are the boss of this bench.

Simply laugh. Spin wildly in your chair while maniacally laughing. Pretend you are stroking a white Persian cat while doing it. Wait for other students in Hillman to join you. They likely feel the same.

Then take to the streets. Laugh while crossing the snazzy new crosswalk in front of Lawrence. Laugh while buying your third coffee of the day from Dunkin’ Donuts. Laugh inside of Cathy, right in front of a tour group filled with prospective students. Show them how much joy there is on campus.

Stare up at the sun and laugh at it. Laugh at that foul beast, the provider of natural life. Make the sun feel foolish for putting you here.

There is no joke. The only joke is existing during finals week. And yes, laughing at nothing in public looks a bit crazy, but I assure you, we’re all mad here.