Atlanta adds Qadree Ollison in 5th round of NFL Draft 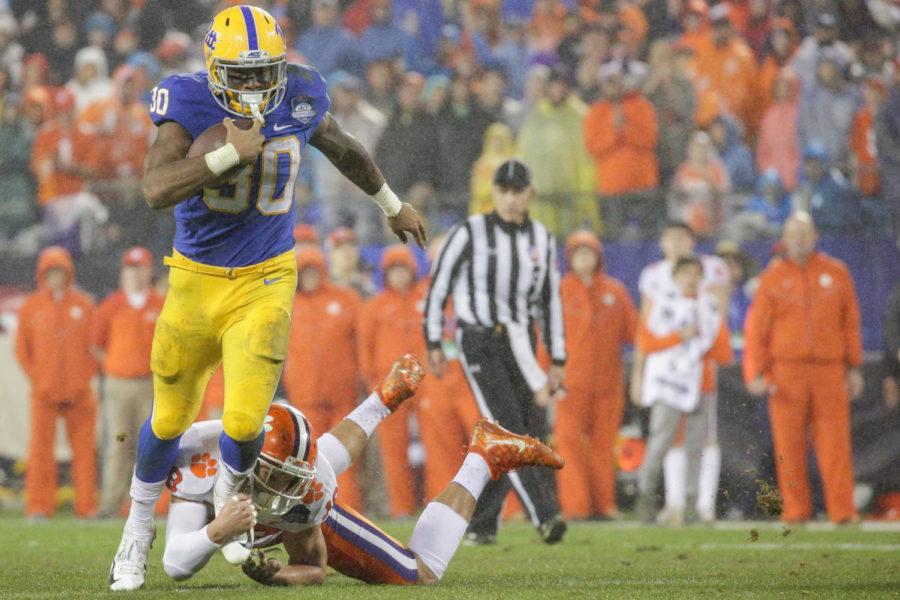 Pitt running back Quadree Ollison (30) was drafted with the 152nd overall pick by Atlanta in the 2019 NFL Draft.

Former Pitt running back Qadree Ollison was drafted with the No. 14 pick of the 5th round, the No. 152 overall pick of the 2019 NFL Draft, by the Atlanta Falcons on Saturday afternoon. Ollison was the first Pitt player taken in this year’s draft.

“The Falcons got a great back and person,” Pitt football head coach Pat Narduzzi said in a press release. “He’s one of the best to carry the ball at Pitt and also got it done on special teams. Most importantly, Qadree was a vital leader for us, on and off the field. We wish him the very best in Atlanta.”

In his freshman season, Ollison took over the starting tailback role after reigning ACC Player of the Year James Conner suffered a knee injury in the season opener. Ollison went for 207 yards and a score in his Pitt debut, kicking off a 2015 campaign in which he recorded only the fifth 1,000-yard rushing season for a freshman in Pitt football history and was named ACC Offensive Rookie of the Year.

During his sophomore and junior season, Ollison was forced to take a backseat offensively. He tallied only 525 yards over those two seasons before exploding for another All-ACC year as a senior.

Before exiting his final game as Panther with an ankle injury in the first quarter of the Sun Bowl last December, Ollison spearheaded a historic Pitt rushing offense in 2018. He rushed for 1,213 yards and 11 touchdowns last fall and finished top three in the ACC in total rushing yards and rushing yards per game.

Ollison and teammate Darrin Hall combined to become the first duo in Pitt history to rush for more than 1,000 yards each in a single season.

The 6-foot-1, 228-pound native of Niagara Falls, New York is known more as a powerful, physical runner that already has an NFL-ready body but needs to increase his agility to gain significant carries at the professional level.

Ollison joins a backfield already capably manned by veteran Devonta Freeman, but figures to be a fine complement to Freeman’s quicker, finesse style of running.