The Pitt News • May 2, 2019 • https://pittnews.com/article/147785/news/grad-union-organizers-call-for-new-election-accuse-pitt-of-unfair-labor-practice/ 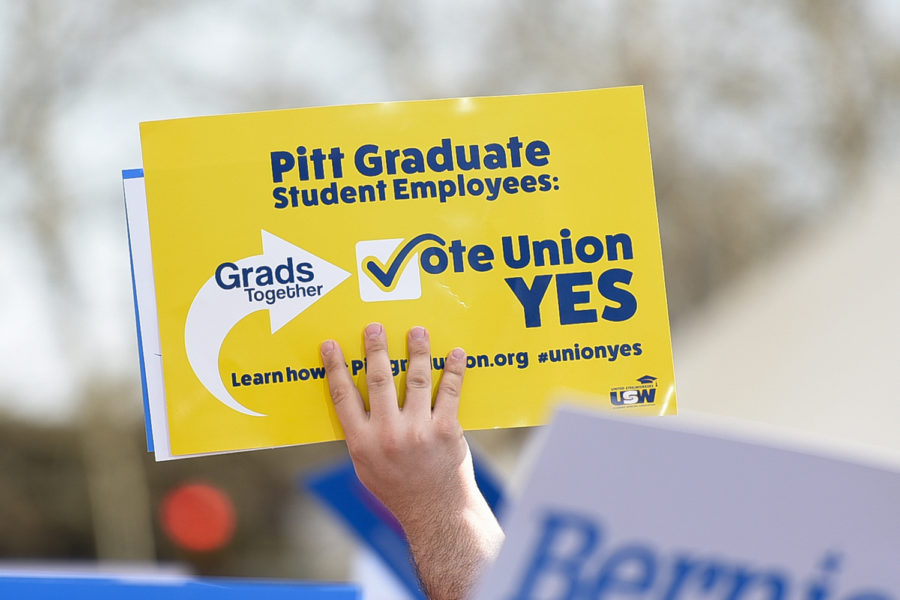 Less than a week ago, the Pennsylvania Labor Relations Board, or PLRB, declared the grad student unionization vote inconclusive. Now, organizers are calling on the PLRB to set aside those election results and schedule a new election.

The United Steelworkers — the union aiding graduate student organizers’ unionization effort — filed an objection with the PLRB Thursday afternoon citing “unfair labor practices” during the election process, according to a press release.

The Graduate Student Organizing Committee appeared to come up just short in the election on April 15-18, with 675 grad students voting in favor of unionization and 712 against, with 153 challenge ballots still left to be counted.

Hillary Lazar, a graduate student in the sociology department, said she believed the election outcome was a result of interference from the University.

“We believe the count today is due to the university’s misleading information and active efforts to obstruct the campaign and election, including pressuring graduate student workers into voting no,” Lazar said after the vote totals were announced last Friday.

In the press release, organizers alleged that the University’s election watchers kept a tally of graduate students who voted in the union election. Organizers said they observed watchers asking voters to show their IDs and spell their names, so they could mark off voters in a list sent to university administrators — a coercive strategy “intended to intimidate voters and potential voters,” the release said.

Organizers also alleged that during the election, Pitt managers, including Steven Little, the chair of the Chemical and Petroleum Engineering Department, unlawfully intimidated graduate students. Little sent an email to the department on April 17, the third day to vote, saying he was surprised only 81 students from the School of Engineering had voted, according to the release.

“This email and others made it clear that the administration’s watchers were tracking who voted in detail and sharing that information with department supervisors,” the release said.

PLRB administrator Dennis Bachy declined to say whether the University’s behavior was lawful or not, but he said election watchers from both parties were allowed to bring lists of eligible voters and check off who voted.

Organizers requested that the PLRB require Pitt administration’s to post a document conceding the illegality of its conduct and stating the rights of graduate student employees under the Pennsylvania Labor Relations Act to vote without coercion in a union election.

Joe Miksch, a Pitt spokesperson, said the University followed processes and procedures as set by the PLRB.

“The claims made by the United Steelworkers — that the administration set out to intimidate and coerce potential voters — are absurd, irresponsible and false,” Miksch said in an email. “On the contrary, Pitt has encouraged all eligible graduate students to get informed and exercise their right to vote and remains dedicated to supporting all students and their success, regardless of their views on unionization.”

Miksch did not address questions regarding the email from Little about the election, or whether a new election should be held.

Bachy didn’t say when the PLRB would rule on USW’s objection, but he said the board plans to make a decision “as quickly as possible.”

This story has been updated with comment from the University.