The Pitt News • May 15, 2019 • https://pittnews.com/article/148025/arts-and-entertainment/pittsburgh-record-convention-showcases-vinyl-revival/ 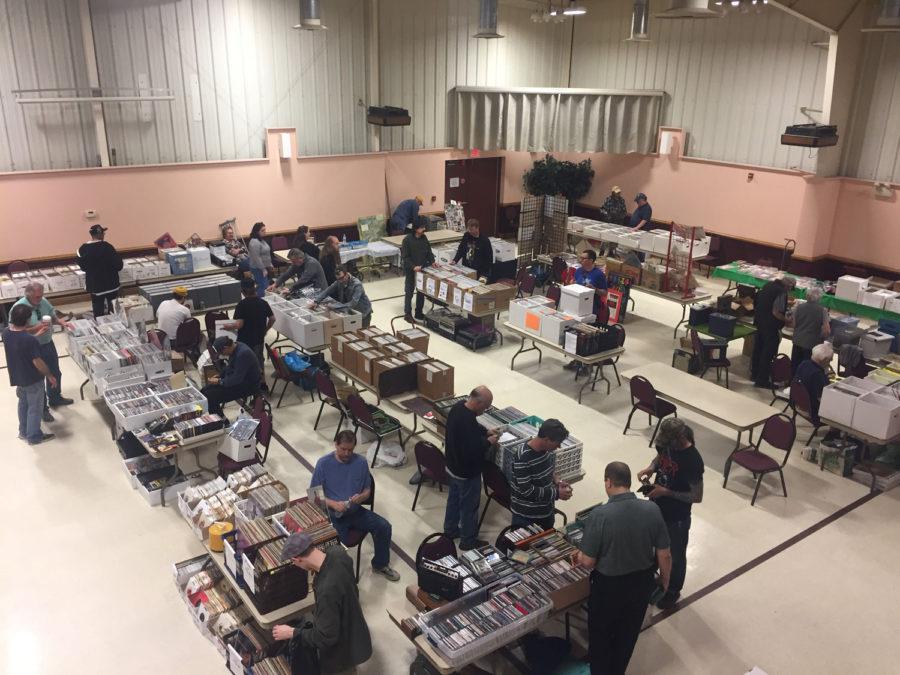 The Pittsburgh Record Convention at the Sokol Club on Saturday.

Vinyl records are often seen as a relic of the past, sitting forgotten in dusty cardboard boxes in various basements. But in recent years vinyl sales have skyrocketed, partially due to popular contemporary artists like Ariana Grande and Panic! At The Disco releasing their new albums on vinyl and popular classic artists like The Rolling Stones re-releasing theirs. The vinyl record has risen again, if Pittsburgh’s biannual Record Convention is any indication.

The most recent Record Convention took place on May 11 at the Sokol Club in the South Side. More than 30 vendors and hundreds of attendees gathered to buy and sell records, CDs, cassette tapes and other music memorabilia. Products included vinyl copies of classic rock albums, rap CDs and artwork featuring ’60s bands like The Beatles and The Monkees.

Pittsburgh native and record enthusiast Anthony Medwid started the convention back in 1996, a time when CDs ruled the market and vinyl was falling to the wayside. The first convention was held at the Sto-Rox Booster Club, a bingo hall in McKees Rocks. After three shows, they moved to Greentree where they stayed for 17 years, then later moved to a volunteer fire department in Bridgeville for four years. Each location provided its own hurdles, including surrounding construction and planning difficulties. This was the first show held at the Sokol Club in the South Side. According to Medwid, he and other attendees were very happy with the new venue.

“This was the best location yet,” Medwid said. “I received a lot of good feedback from everyone that came, some even said they liked it more than our previous hall.”

Each vendor had their own corner of the event space to display their collections and offerings. Many came from across the country to attend the convention and share their music. Vendors ranged from private collectors looking to thin out their expansive collection of music to record store affiliates looking to promote their business.

Amadeo Eichberg is a private collector who has been attending the convention as a vendor for the past eight years. While he was a student at the University of Miami, he began collecting records after discovering his aunt’s old record player in her Miami Beach apartment. This was at a time when CDs were all the rage.

“I was really getting into music at that point in my life, specifically when everyone was getting into CDs and getting rid of their old vinyl. I was getting these Bob Dylan, Rolling Stones and Pink Floyd albums for about $2 or $3 used,” he said.

Eichberg began spending around $20 a week on vinyl, eventually amassing a substantial collection. As life went on, he got married and started a family, then eventually moved from Florida to Pittsburgh. This is when the records became a bit of a problem.

“My wife didn’t want me to take the records with us. I said, ‘Please! I’ll sell some of them,’ and sure enough, it coincided with the resurgence of vinyl,” Eichberg said.

Despite being one of the few private vendors at the show, he still feels welcome among the record-collecting community.

Dave Anderson is one of the professional collectors who attended this year’s convention on Saturday. Anderson is the owner of Backstreet Records, based in Punxsutawney. Backstreet primarily sells vinyl, leaning towards the rock genres. Saturday was his first time at the Pittsburgh Record Convention.

Anderson was one of the few vendors to sell new vinyl at the convention, such as Vampire Weekend’s May 2019 album “Father of the Bride,” as opposed to the standard used copies that many vendors have had in their collections for years and years.

“My stuff was all newer records, which some of the record purists turned their noses up at. It’s something that not everyone is selling at the convention, which usually works out for me sales-wise,” he said.

Anderson was happy with his experience at the convention, having made connections with other vendors and customers.

“Before the convention even started, I had spoken to a few of the other vendors and made some sales and traded with them. It’s always cool to show each other that we’re supporting one another in this business,” he said.

The next Pittsburgh Record Convention will take place on Nov. 16 from 10 a.m. to 4 p.m. at the Sokol Club.