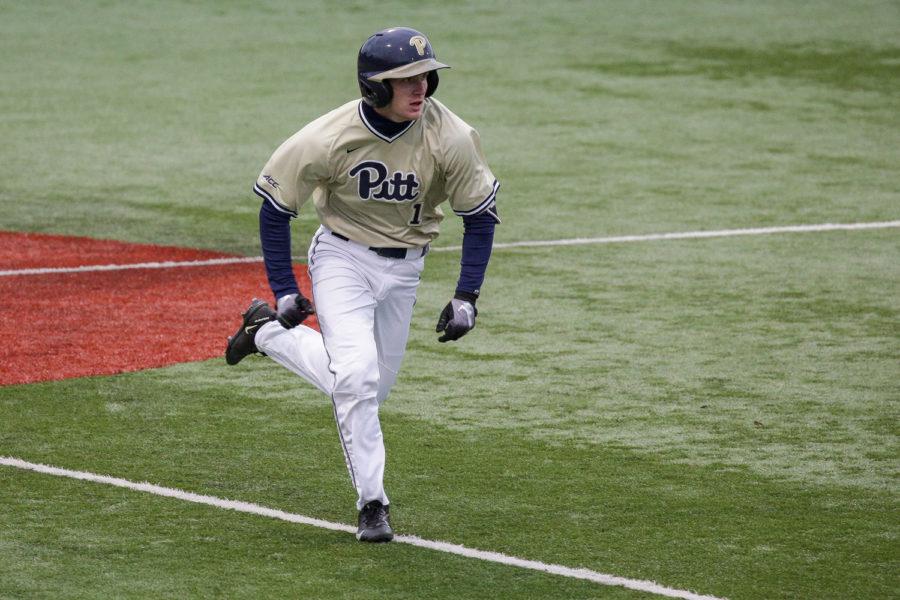 Junior outfielder Nico Popa (1) put the first points on the board with a home run at Pitt’s 9-4 loss to West Virginia on Tuesday evening.

For the second time this season and the 196th in history, the Pittsburgh Panthers and the West Virginia Mountaineers took their historic Backyard Brawl rivalry to the baseball diamond.

Earlier this year, the Mountaineers emerged victorious 5-4 at Monongalia County Ballpark on April 3 for their 108th win over Pitt in the history of this series. Tuesday night’s clash between the longtime regional rivals occurred against the scenic backdrop of PNC Park, home of the MLB’s Pittsburgh Pirates.

But though the venue was different, the result was the same for Pittsburgh, as West Virginia combined a stellar outing from starter Nick Snyder with a steady late-game offense to emerge victorious over the Panthers, 9-4.

Both teams opted to send southpaws to the bump to begin the ballgame, with the junior lefty  Snyder earning the win for West Virginia and lefty Chris Cappas, a sophomore, taking the mound for Pitt and eventually being tagged with the loss.

Pitt’s Nico Popa, a Pittsburgh native, opened the scorebook in his first at-bat of the evening, launching a barely-fair home run to left field to lead off the Panthers’ half of the second frame.

After the game, Popa recalled coming to Pirates games with his parents as young as 6 years old.

“I never really thought I was ever going to be playing here,” Popa said. “So getting the opportunity to do so here tonight was pretty cool.”

Despite the result, at his press conference following the game, first-year Panthers’ head coach Mike Bell focused on the singular opportunity the game’s setting offered his players.

“One thing we’ve talked about from the get-go with our program is creating memories and that was part of our conversation after the game,” Bell said. “We’re judged by wins and losses, but what we’re trying to do is create experiences and create memories for our guys. What better way for a young man growing up here in Pittsburgh to hit a homerun than at PNC Park against a rival?”

After Popa’s home run, the Mountaineers responded quickly in the top of the third, with a leadoff double from left fielder TJ Lake. Lake would score the tying run after being advanced to third by shortstop Tevin Tucker’s perfect squeeze bunt and brought in by a double down the left field line from second baseman Tyler Doanes. With a sacrifice groundout to second followed by a one-out double to left-center by right fielder Darius Hill, the Mountaineers would add two more runs before Cappas nabbed a sharply hit comebacker off the bat of designated hitter Paul McIntosh to end the inning.

Snyder took the cue from his offense, shaking off the home run to allow just two more hits throughout his seven innings of work, for a final stat line of 7 IP, 3 H, 1ER, 2 BB and 11 strikeouts.

“He was the ballgame,” Bell said of Snyder’s domination. “He really held our offense in check.”

West Virginia stretched its lead to eight runs over the next three innings as Cappas was relieved by Chris Gomez in the fifth and the Pitt bullpen struggled to hold the Mountaineer offense in check. A two-out fielding error by Pitt’s second baseman Gregory Ryan Jr. in the fifth let in one run before the next Mountaineer, catcher Ivan Gonzalez, singled to left, scoring Marques Inman. An RBI double from Hill in the following inning, his second of the night, made the score 6-1 in favor of the visiting Mountaineers. RBI doubles from Lake and Doanes in the top of the eighth would mercifully cap WVU’s scoring.

Pitt senior catcher Cole MacLaren provided the only other runs for either team with a three-run home run to left field in the bottom of the eight, his third in the season and second in as many games after homering in his final at-bat at Charles L. Cost Field on Senior Day, May 12.

Commenting on the “great” relationship between his program and the leadership of the Pirates, Bell expressed interest not just in maintaining the series between WVU and Pitt, but also potentially playing in-state rival Penn State in a similar setting.

“We just want to continue to provide these opportunities for these young men and allow them to create memories like hitting a home run at PNC Park,” Bell said. “I’d love to play Penn State and West Virginia here every year, I really would, if the schedule works.”

The Panthers will seek to finish the regular season on a better note with a final three game series against Georgia Tech Thursday-Saturday.