The Pitt News • May 15, 2019 • https://pittnews.com/article/148045/news/plrb-hears-grad-student-union-election-objection-in-downtown-hearing/ 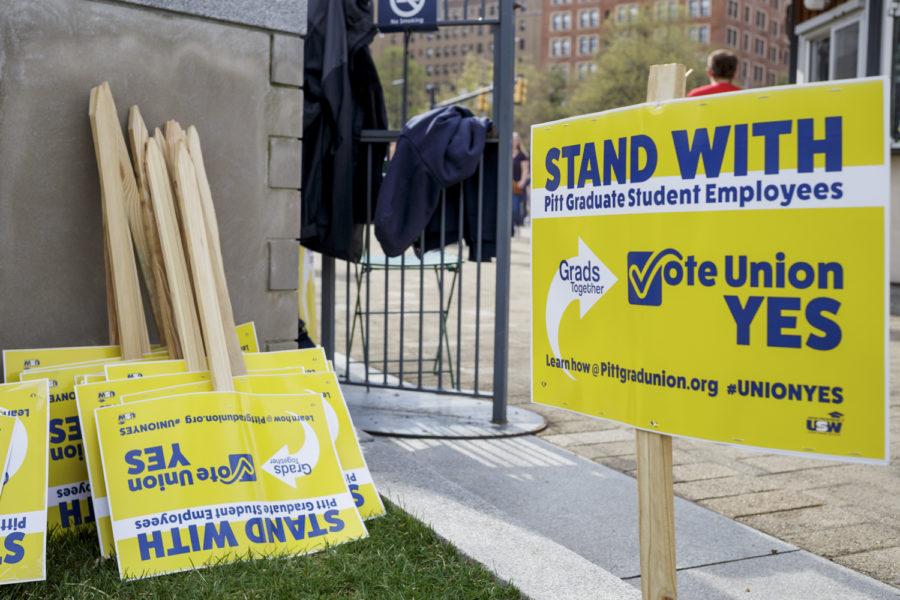 Grad students will vote on whether or not to establish a union between April 15 and 18.

Nestled in a small office in downtown’s Piatt Place building, a group of lawyers debated the future of Pitt graduate student unionization Tuesday and Wednesday.

The Pennsylvania Labor Relations Board held the hearing in response to an objection filed by graduate students on May 2. Union organizers are alleging unlawful voter intimidation by the University during the April 15-18 unionization election. Grad students decided against unionization by a vote of 712 to 675 — a margin of 37 votes.

The hearing largely centered around deciding on the union organizers’ allegation that University election watchers committed an unfair labor practice in requesting identification at the polls from voters, which organizers claim led to voter suppression. Both the union and the University were permitted to hold a list of eligible voters and both had election watchers at the polls.

Caitlin Schroering, a union organizer and graduate student in sociology who testified on Wednesday, said checking student identification at the polls resulted in a “coercive atmosphere,” which she alleges resulted in a lower voter turnout.

“I was observing that for some days of the election, that everyone who came up had to repeat their names,” Schroering said. “Many of the graduate students were concerned about the anonymity and by stepping into that room where there was someone repeating names, that would have made them feel uncomfortable.”

But several of Pitt’s election watchers testified against the allegations of voter intimidation. Victoria Lancaster, a Pitt election watcher and Director of Faculty Actions in the Provost’s office, said there were not any unfair actions taken towards the graduate students.

“There was some concern about anonymity, but the ballots were anonymous,” Lancaster said. “They just used the names to check, on the list. When voters would come up, the staff and the watchers would check their names on the list.”

Amanda Brodish, another Pitt election watcher and director of the Provost’s Data Analytics team, said she was told to not ask students for their identification when voting.

“I was not to ask a voter for his or her ID,” Brodish said. “I was not supposed to interact with the voter, but I had an understanding from the University to check people off a list who were voting.”

But Steve Suway, a former graduate student in neurobiology who graduated in April, said there were cases of voter intimidation present during voting. He said non-white students were asked more frequently about their IDs or names than other students.

When asked about Pitt’s election watchers asking repeatedly for some students’ names, and in some cases asking students to spell their name, Lancaster said some names were hard to understand, which she chalked up to a diverse student body.

Lancaster added that she believed the actions did not constitute racial and ethnic profiling of the students.

Besides deciding on the intimidation allegations, union organizers have asked the PLRB to hold a new election and to compel Pitt to post a document conceding the illegality of its conduct, if the board rules in union organizers’ favor. The document would also state the rights of graduate student employees under the Pennsylvania Labor Relations Act to vote without coercion in a union election.

If the PLRB decides to hold a new election, Suway and Schroering said they hope the University will take appropriate measures to prevent voter intimidation.

“A second vote would be fantastic but for that to work, all of the things that we discussed would have to be first fixed,” Suway said. “The University would have to admit to these things and have to come up with a resolution that is going to be fair to everyone.”

Reflecting on the campaign to unionize graduate students, Suway said the journey has both educated him, as well as challenged him.

“I think that it taught me the value of organization as a workforce,” Suway said. “The idea that the traditional structure of your working condition as organized by your employers … can be changed and overcome through collective bargaining. It has challenged me to have difficult conversations with my peers.”