The Pitt News • May 22, 2019 • https://pittnews.com/article/148119/arts-and-entertainment/george-a-romero-archive-finds-home-at-hillman-library/ 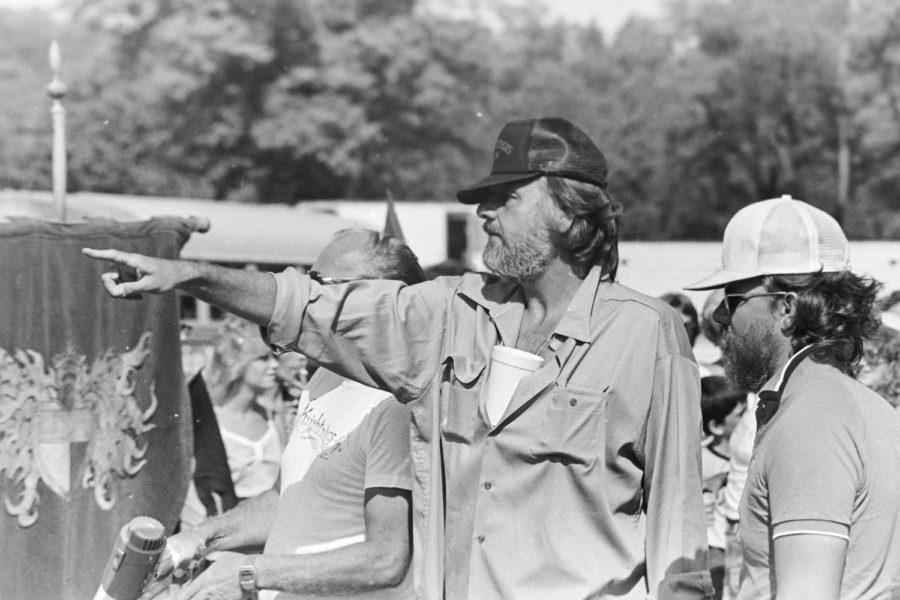 George A. Romero on the set of “Knightriders,” filming near Pittsburgh in 1980.

By Sara Nuss, For The Pitt News

Known widely as the father of the modern zombie movie, George A. Romero and his legacy have risen again in recent years following the filmmaker’s death in 2017. His impact will soon take on new life in Hillman Library with the introduction of the George A. Romero Collection.

Romero made Pittsburgh “The Zombie Capital of the World” in 1968 when he shot his cult classic zombie film, “Night of the Living Dead,” on the outskirts of the city. His impact has inspired several local festivities in his honor, including “zombie walks,” when fans dress up as flesh-eating zombies in the Monroeville Mall and the Evans City Cemetery — where “Night of the Living Dead” was filmed.

The archive collection at Hillman will contain produced and unproduced screenplays, the original annotated script for “Night of the Living Dead,” props from Romero’s movies — such as a latex zombie head — and photographs from the set of his 1979 “Dawn of the Dead,” among other items.

The Romero Collection is the product of three different archives that Pitt acquired from Romero’s widow, Suzanne Desrocher-Romero, his daughter, Tina Romero, and his business partner and film producer, Peter Grunwald, respectively. The collection will be displayed on the third floor of Hillman Library in a multimedia exhibit after the floor’s renovations are complete. More details, including an official opening date, will be announced as planning moves forward.

The Romero Collection will be the foundation of the Horror Studies Collection, which is currently in development at Pitt and will be one of the first University archives dedicated specifically to the horror genre.

Benjamin Rubin is a Horror Studies Collection Coordinator and Library Specialist at Hillman Library and is the active curator of the Romero Collection. He will help to create and manage the collection’s accessibility, work with researchers and scholars looking to use the collection and further build the archive’s contents. Rubin said the Romero family chose Pitt to house the archive due to the University’s ability to store the artifacts and continue Romero’s legacy after his death in 2017.

“In conjunction with film studies professor Adam Lowenstein, we met with the family to discuss reasons Pitt would be a good depository archive,” Rubin wrote in an email. “Due to our ability to maintain the materials from both a preservation and security perspective, as well as our dedication to ensure the archive would be available for researchers seeking to investigate and learn from Romero’s legacy and work, it was agreed that Pitt would be the home of the archive.”

Film and media studies PhD candidate Sonia Lupher, one of three graduate students working under Rubin’s supervision helping to process the archives over the summer, described working on the archives as an exciting and rare opportunity for a graduate student. Her job will consist of documenting the items in the collection. A Special Collections staff member will then pick up where the graduate students left off in the fall to finish up and reorganize the pieces in a fashion that they think suits the archive.

The Romero Collection also shows the director’s important influence on the horror genre and how he has affected the genre since the creation of the zombie, Lupher said.

“The Romero collection is undeniably important because Romero was a crucial figure in horror filmmaking and it makes sense to keep his work in one place where it can be considered as a whole, rather than scattered off to several institutions or museums,” said Lupher.

Adam Hart, a visiting assistant professor in film and media studies, is also is working on the collection alongside other Romero-related pursuits. An avid horror fan and researcher of the genre, he helped organize Romero Lives!, a local organization that formed after Romero’s death in 2017. In October 2018, Romero Lives! celebrated the 50th anniversary of the release of “Night of the Living Dead” and honored the filmmaker’s career through a series of events throughout the city. This included screenings of Romero’s films and the opening of a pop-up bar in Market Square called Zombie Den: Bar of the Living Dead.

Romero Lives! will once again celebrate Romero’s work this fall. According to Hart, the event will feature some of Romero’s films at the Regent Square Theater and a gala celebration of the archives at Hillman when it is finalized. Among the crowd will be both Pitt faculty and Romero’s family and colleagues.

“We’re following that up again with a second Romero Lives! celebration this October – once again we hope to involve the entire city in the planning and execution, and we’ve already heard from many of the several dozen organizations that took part in last year’s celebration,” wrote Hart in an email.

Rubin is looking forward to the research opportunities that will come from having the collection housed at Pitt.

“I am excited at the prospects that this collection presents – I think it will absolutely have a huge impact on horror studies and situate Pittsburgh as a destination for all things horror. Additionally, with the archive and the larger effort to collect around horror studies, it’ll allow Pitt to emerge as a leader in scholarship around a genre that is generally neglected in academic study, despite the massive fan following it enjoys,” Rubin said.