The Pitt News • May 23, 2019 • https://pittnews.com/article/148161/state-national/this-memorial-day-veterans-take-on-another-threat-rising-cancer-deaths-in-the-ranks/

This Memorial Day, veterans take on another threat: rising cancer deaths in the ranks 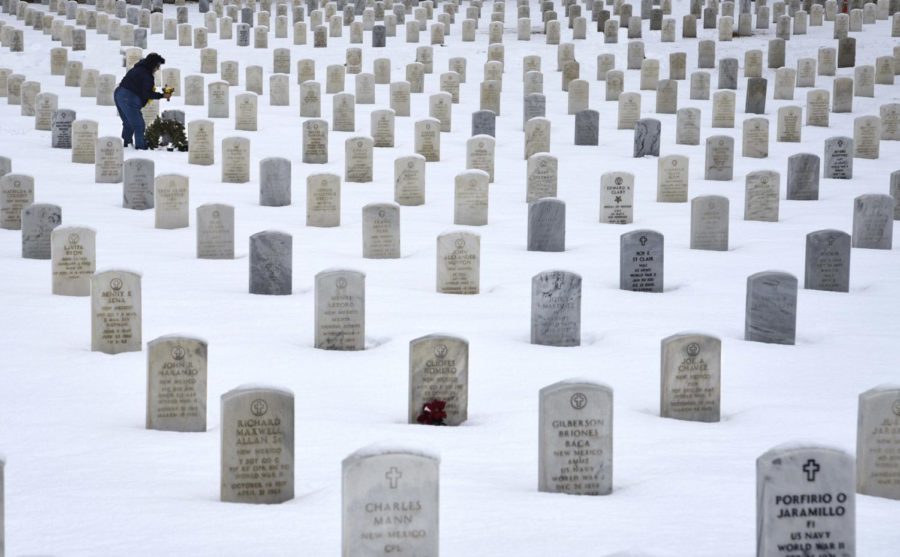 SANTA FE, NEW MEXICO - JANUARY 11, 2019: A woman places flowers on the grave of a loved one at the Santa Fe National Cemetery in Santa Fe, New Mexico, which is administered by the United States Department of Veterans Affairs. (Photo by Robert Alexander/Getty Images)

WASHINGTON — On Memorial Day 2013, Coleen Bowman was a new widow. Her husband had died four months earlier and she wanted support to face that first military holiday of remembrance. So she registered for TAPS, the Tragedy Assistance Program for Survivors, and spent the weekend with hundreds of other grieving military families.

“There was a lot of KIAs,” Coleen said, referring to those killed in action.

But that was not how Coleen’s husband had died, and it made her feel more alone.

She’s no longer alone. TAPS’ membership rolls are growing, but not because of combat deaths. In the last five years, it has reported a 51% increase in the numbers of families grieving a service member who died due to illness or cancer.

The spike led the organization to make a tragic projection: By 2020, the top killer driving military families to join TAPS won’t be suicide. It will be cancers or other illnesses.

TAPS has reported more than 10,000 service member deaths due to illness since 2007, based on the families who are on its membership rolls. In total, 85,000 families of fallen service members have joined the organization since it launched in 1994.

Coleen’s husband, Army Sgt. Maj. Robert Bowman, 44, was an Army Ranger who deployed to Iraq in 2004 with Recon platoon of the Fort Lewis, Washington-based 1st Battalion, 24th Infantry Regiment. His armored Stryker was hit by enemy fire at least 13 times during his 12 months overseas. Each time, depleted uranium in the Stryker’s armor would absorb the attack.

In retrospect, Coleen wonders what harmful particles shook loose in those blasts, what her husband breathed in. Bowman went back to Iraq in 2007 for another 15 months.

Once home, he started to feel ill. Visits to doctors suggested he had the flu. Finally, in 2011 Bowman got the diagnosis: cholangiocarcinoma, or bile duct cancer. It is a rare cancer in the general population, and very rare for someone as young as Rob.

But it’s not unusual to see rare cancers in younger service members anymore.

“It just was more and more families coming forward with exactly the same story,” Carroll said. “Stories of young service members who went into deployed areas perfectly healthy, and then came home and at a young age who were suddenly stage 4 with very rare cancers.”

The stories don’t surprise Coleen. Her husband was a respected senior enlisted leader who was very close to his platoon. She has stayed in touch with the majority of them. Many of them are ill.

“Over a third of them had something wrong with them or have passed away,” Coleen Bowman said. She’s heard of several cases of brain tumors and other “strange tumors that they don’t even know what it is.”

For now, most of the data is anecdotal. It is stories passed from one spouse to another or by veterans in online forums or private support groups. The various databases run by the Department of Veterans Affairs and Defense Department that track cancer-related entries for health care are unwieldy or inaccessible for compiling trends.

There are also government registries where service members can self-report. But getting holistic, specific information on what units may have been exposed to, what illnesses its members are suffering from, and tying those illnesses to military service is difficult.

During its annual Memorial Day conference on Sunday, TAPS and several other veterans organizations will launch an effort to begin to capture the full extent of the problem, beginning with its first-ever panel on “Understanding Toxic Exposure in the Military.” They will discuss illnesses tied to overseas wars and domestic living conditions.

“When we talk about toxic exposure, we’re talking OCONUS, which is overseas, and CONUS, which is here in the United States,” said Derek Fronabarger, legislative director of the Wounded Warrior Project. Exposure to contaminated water at Camp Lejeune could be included. So could potential lead poisoning in military housing, he said.

Individual service members, however, will have to file Freedom of Information Act requests to access their own records.

The veterans groups will also push for increased access to those records, Fronabarger said, to enable military personnel and their doctors to more quickly conclude, “You know, your cough might be more than a cough.”

Coleen now serves as a public speaker for TAPS to raise awareness on military service-related illnesses. It’s something Rob asked her to do.

In the 19 months after he was diagnosed, Rob and Coleen learned more about his exposure and about how many others from his unit were also ill.

He wrote letters to their four daughters, the youngest of whom was only 10 years old when he died. “He actually left cards for our daughters to open on their wedding day, their 21st birthday, just really special occasions in their life,” Coleen said.

He also left Coleen with a mission.

“He was a great leader,” Coleen said. “His last gift of leadership was to say ‘Make sure and tell my story and help the men behind me.’”