The Pitt News • May 28, 2019 • https://pittnews.com/article/148195/opinions/opinion-candidate-electability-argument-isnt-relevant/ 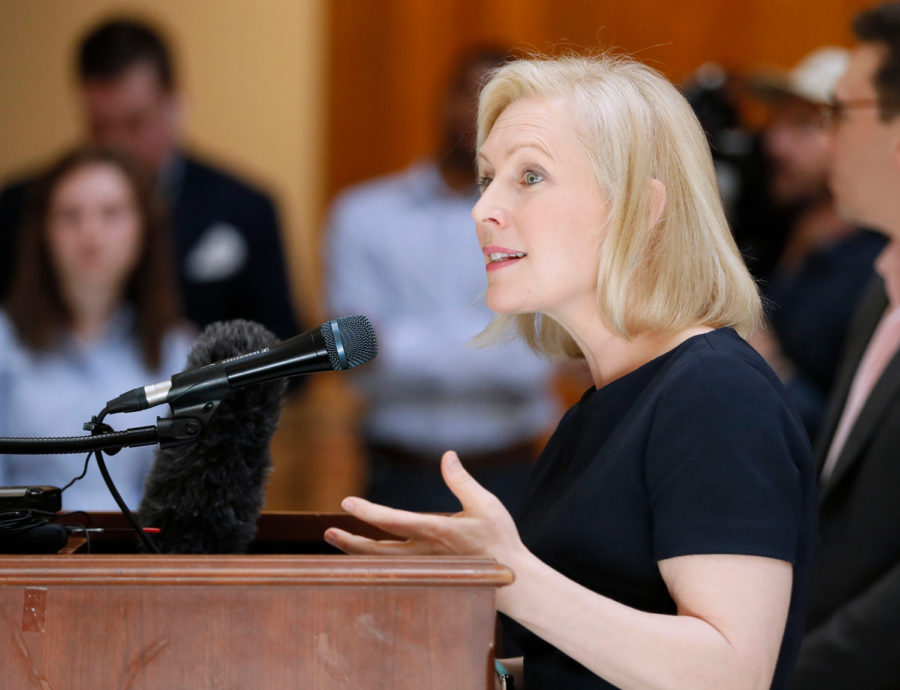 Presidential candidate Sen. Kirsten Gillibrand, D-N.Y., speaks at a round table discussion and press conference at the Georgia state capitol on May 16 to discuss abortion bans in Georgia and across the country. Georgia was the fourth state this year to pass anti-abortion "heartbeat" legislation.

Anyone who’s participated in or witnessed early conversations about the 2020 presidential race has probably heard some discussion about “electability.” According to a CNN poll, 46% of voters said that electability, which can loosely be defined as the perceived validity of a candidate, was a top issue when it came to choosing a candidate in the Democratic primary. It seems to be the topic overwhelming the conversation surrounding the Democratic primary as of late — despite the fact that it’s an ill-defined term.

It’s understandable in a sense. No Democratic primary voter wants another four years of President Donald Trump, and they think that picking an “electable” candidate over someone they like more could be our best chance at defeating Trump. But people don’t seem to understand what they’re saying when they talk about electability or what a self-fulfilling prophecy it becomes, and voting for the candidate they deem most “electable” in the Democratic primary instead of the candidate they genuinely want isn’t a good way to go about things.

When people talk about an electable candidate, they seem to mostly just mean a white man, despite the fact that the definition is simply just “a person that has a reasonable chance of being elected.”

The idea that only a white man is electable is frankly ridiculous, especially since most of the female candidates for President have proven over and over by winning races that they are electable.

When 2020 presidential candidate Sen. Kirsten Gillibrand, D-N.Y., first ran for office she did so in a very red district of upstate New York. She won that race and has won every one of her races since. She even flipped 18 counties of New York in 2018 that had voted for Trump in 2016. Her fellow candidate, Sen. Elizabeth Warren, D-Mass., also defeated a Republican incumbent in her first race for Senate, while Sen. Amy Klobuchar, D-Minn., another Democratic presidential candidate, won several elections by strong margins in a purple state. Though Sen. Kamala Harris, D-Calif., has won all of her elections in fairly liberal areas, she has often been the first woman of color to do so in every case. None of these women has ever lost an election before.

Yet these four contenders for the Democratic nomination are still viewed as less “electable” than their white male counterparts despite this evidence to the contrary. Former Vice President Joe Biden and Sen. Bernie Sanders, D-Vt., both have run for president unsuccessfully before but both are polling higher than their female counterparts — in part due to this notion of electability.

“To understand Bidenmentum, you’ve got to have some of the conversations I had yesterday: Middle-aged women explaining that 2016 showed that voters won’t elect a female president, so they’ve got to be strategic,” Weigel said in a tweet.

While it is very likely that sexism was a major factor in Secretary Hillary Clinton’s loss in the 2016 presidential race, there were many other unprecedented factors at play in that race — such as interference from a foreign government. It is misleading to say that the sole reason why Clinton lost in 2016 was her gender — and it would be a mistake to not vote for a female candidate simply based on the belief that a woman cannot win.

This idea that America isn’t “ready” for a female president is usually blamed on voters in “middle America.”

“When people talk about electability in the context of 2020, they are talking about white, male candidates and white, working-class voters,” Harris stated at a NAACP dinner. “There has been a conversation by pundits about ‘electability’ and ‘who can speak to the Midwest.’ But when they say that, they usually put the Midwest in a simplistic box and a narrow narrative.”

The assumption that we must pick a white male moderate as our nominee in 2020 to appeal to working-class voters in the midwest is not only unfair to those voters, but it is unfair to the country as a whole.

Traditional notions of who is and isn’t electable are often rooted in racist, sexist and ideological assumptions. This means that the candidate that is usually viewed as electable would be the moderate white male candidate — in this race that would Joe Biden.

The problem with voting for a candidate in the primaries simply because one thinks that they would be the most “electable” in the general election is that they won’t necessarily have the heart and passion behind their campaign to turn out voters — especially those who have been non-voters in past elections, which are a group we desperately need to win in 2020. Traditionally, Democrats lose when they chase this notion of electability in the primaries.

“The best way for candidates to show that they are electable is to build a big grassroots base in the early states,” said former Obama staffer Tommy Vietor.