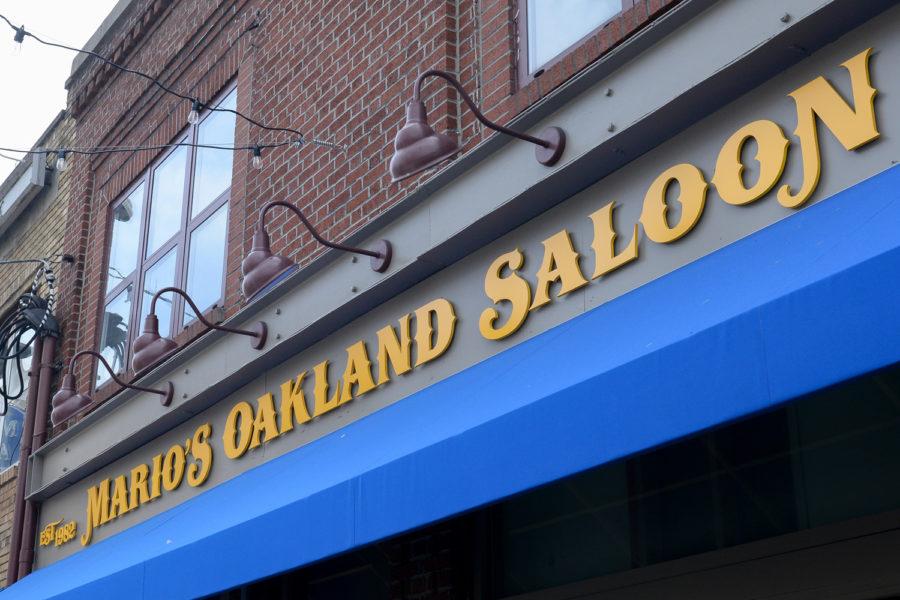 Inside Mario’s Oakland Saloon Thursday night, pop hits blasted over speakers as the bar filled to the brim with students and locals celebrating its grand opening. Outside the doors of the saloon, which sits on Oakland Avenue between Forbes and Fifth, dozens more excited patrons lined up, waiting for bouncers to check their IDs. By 11 p.m., the line was backed up to Forbes Avenue.

Mario’s has taken over the old location of Peter’s Pub, which was a staple for nights out in Oakland since 1974 before it closed in May 2018. Many Oakland natives and students were disappointed when Peter’s Pub closed, and the legacy left behind set a high bar for Mario’s, with many guests coming out to see if the new bar could live up to expectations.

Becca Greenhouse, a bartender at Mario’s, saw both the chaos and excitement of the past week firsthand.

“Peter’s Pub was really established, so Mario’s has done a lot of renovations. It looks really nice in here,” Greenhouse said. “A lot of people were excited for our opening. I was here right when we opened the doors at 11 a.m. and people were here and ready to eat and ready to sit down and drink.”

Mario’s offers both a downstairs and upstairs with seating and room for guests who might want to stand and socialize or dance with friends. Food options are far from limited, offering traditional appetizers like dips, nachos and sliders in addition to entrees such as sandwiches, salads, pizza and tacos. The drink menu offers classic beers on tap, from Guinness to Blue Moon to Yuengling, and plenty of cocktails and other liquor options.

For Greenhouse, many of her friends know Mario’s name from nights out in other parts of the city. Mario’s has two other locations — one in South Side on East Carson Street and another in Shadyside on Walnut Street.

“People know Mario’s, it’s a big name around here,” Greenhouse said. “A lot of people have told me that it’s really cool that Oakland now has one too.”

The owners of the Mario’s venues said they had their eyes on launching an Oakland location for some time. Louis Pessolano, one of the five owners of the franchise, said his team had planned with the owners of Peter’s to take over the space.

“We thought that there was a lack of places to eat and drink in this area, and George, the owner of Peter’s, gave us a call last summer and reached out knowing that we had been interested in possibly taking this off of his hands,” Pessolano said. “He said that he was ready and if we were still interested, we could do this.”

From there, it was a “numbers game,” according to Pessolano. Since its opening, Mario’s Oakland has seen large crowds — and not just during the evening hours for drinking and dancing.

“We were surprised by the response [on opening night], especially since this is just the summer session and there aren’t as many students in Oakland,” Pessolano said. “That was just the night, our lunches have been very strong and steady which is great. We get to see the professional workforce in Oakland — so we get a good mix of people here.”

However, with Mario’s so close to Pitt’s campus and the South Oakland neighborhood, the bar’s main demographic is still college students. One such student who now enjoys visiting Mario’s is Taya Range, a senior psychology major. Range came by Mario’s for opening night Thursday and came back for an early dinner with friends Tuesday afternoon. She and her friends chowed down on appetizers and sipped iced cocktails, taking in the sun through the large, opened garage door-style windows at the front of the bar.

“This place has $5 buffalo chicken dip, what more could you need?” Range said, causing her table of friends to erupt in laughter. “Mario’s is the best. It’s nice to have another place to go out that is so close to campus too.”

The late nights do get rowdy at Mario’s with packs of guests playing darts, dancing and watching sports, but for Pessolano, having an Oakland location is about more than just the college nightlife.

“The first day we opened up — we technically don’t open until 11 a.m. — but at 10:58, just because the door was opened a group of four kids came in,” Pessolano said. “And just to see the excitement on their faces was cool, they asked ‘Are we the first ones in here?’ And I just said, ‘Well yeah! We open in two minutes. They got so excited, they were taking selfies, and that went on from 11 a.m. from 2 a.m., it goes on all day long.”