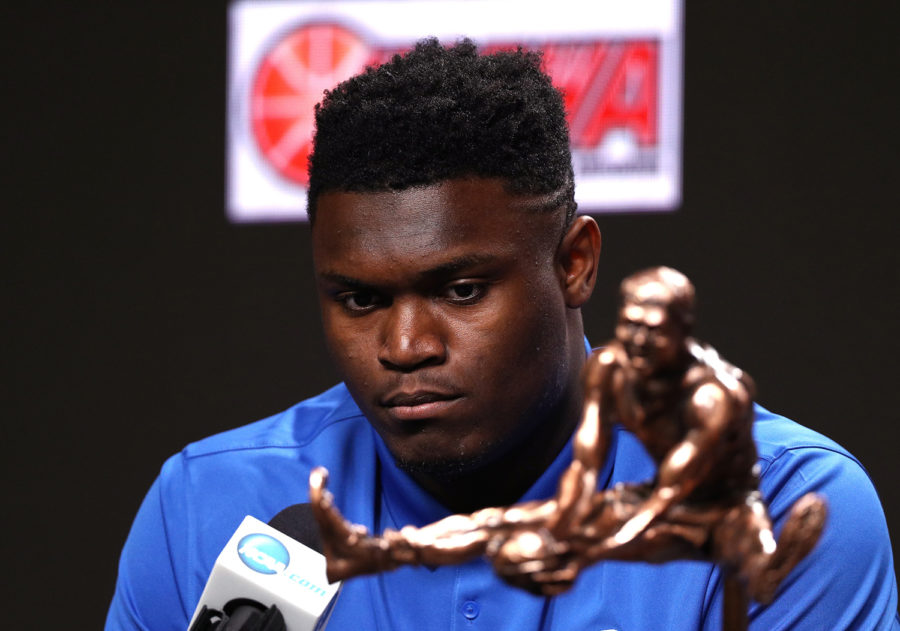 Zion Williamson speaks during a news conference after being awarded the USBWA Oscar Robertson Trophy Player of the Year prior to the 2019 NCAA Men's Final Four at U.S. Bank Stadium in Minneapolis on April 5.

The NBA draft is approaching fast, and the league’s finals are even sooner. In honor of the season, our staff is sharing four of our hottest basketball takes — and one about Serena Williams.

Luck of the draw

On May 14, the New Orleans Pelicans lucked into the No. 1 overall pick in the 2019 NBA Draft, after being tied for the seventh best odds to acquire the top selection. Their lucky break will ultimately land the Pelicans the best prospect in the draft — Zion Williamson.

This will also leave newly hired general manager Trajan Langdon with an enormous decision this coming offseason. Langdon can pair the likes of Williamson with disgruntled superstar Anthony Davis, or he can trade Davis away and start fresh with Williamson as the face of the franchise.

Langdon should go for the latter and start over the rebuild, and it’s clear who his main trade target should be — the New York Knicks. The Knicks possess the No. 3 selection in the 2019 NBA Draft and have other young talents on their roster that would benefit the Pelicans. A trade between these teams would likely trade Davis for the No. 3 pick, along with Kevin Knox, Mitchell Robinson and Allonzo Trier.

The Pelicans would end up with both the No. 1 and No. 3 selections in the upcoming draft and could draft both Zion Williamson and RJ Barrett, who were teammates on Duke this past season.

No matter how this scenario plays out, it leaves the New Orleans Pelicans with a respectable starting lineup. The starting five would consist of Jrue Holiday, RJ Barrett, Kevin Knox, Zion Williamson and Mitchell Robinson. Players like Allonzo Trier and Julius Randle, if he remains with the team, would provide a spark off the bench.

With this new roster, the Pelicans will soon be a threat in the Western Conference and will be a better team without Anthony Davis moving forward.

Hampton skips on college and goes to New Zealand

In a shock move in the basketball world on Monday, RJ Hampton announced that he was skipping college and instead going to play basketball overseas. Hampton will be playing for the New Zealand Breakers in the Australian Basketball League and will not be playing Division 1 basketball like most other top players out of high school.

While it’s unusual for Hampton to choose to play abroad instead of joining one of the top basketball programs on his list like Texas Tech, Memphis or Kansas, he isn’t the first top player to skip out on playing in college. Pro players like Emmanuel Mudiay, Brandon Jennings and Terrance Ferguson all went abroad instead of going the traditional college route.

What does make it exceptional is that Hampton doesn’t have academic problems or the issue of facing an amateur status like the other three did.

Hampton, who was the No. 5 player in the ESPN 100 class of 2019 and had been projected to be the No. 6 pick in the 2020 draft, also has two parents who have graduated college, with his mother working towards a master’s degree.

According to Hampton, he decided to skip college because he saw how players like Dallas Mavericks forward Luka Doncic have been at the top of their games in the NBA after playing internationally.

“I just think my dream has never been to play college basketball,” Hampton said. “My dream was to always play at the next level in the NBA. So I think this was the best route to live like a pro and play with grown men everyday and not have to juggle books and basketball and focus on my main goal.”

Hampton has the talent to be great at the next level, but he’ll have to play well abroad so his stock doesn’t slip in favor of college players — like it did for Mudiay, Jennings and Ferguson. If he does play well in the Australian league, he could set a trend for other top high school players going abroad instead of to college.

The King of the North

The Toronto Raptors finished off the Milwaukee Bucks on Saturday to advance to their first ever NBA Finals. Despite a slow start — Toronto went down 2-0 in the series at first, and it looked like they wouldn’t be able to stop the likely MVP Giannis Antetokounmpo —  they proceeded to win the next four on the back of another generational talent, Kawhi Leonard.

Leonard’s 29.8 points per game, matched with the suffocating defense he’s famous for, propelled his team to victory. It was a career-defining series, followed by his legendary Game 7 buzzer-beater to defeat Philly the previous series. These are the type of moments that make a player want to stick around in a city. And stay Kawhi Leonard should.

Sure, Leonard could head to LA to join the Clippers and instantly vault them into contention. But beaches and billboards aren’t him. He’s quiet and reserved, cold to an extent, like the city he was traded to from the Spurs last offseason. And a move to the Western Conference would make the path to a ring more difficult.

Golden State will always be tough, even without Durant or Cousins, as it has shown these playoffs. The Nuggets are a young team that looks like it’s here to stay. Teams like Houston and Portland will always be strong with James Harden and Dame Lillard.

Meanwhile, Toronto’s competitors in the East showed their vulnerability this year. Boston imploded. Philly’s young stars folded under pressure. The Greek Freak will always loom over everyone, but Toronto seemingly found a way to slow him down.

Leonard showed he can dominate the East. He made plays that will be remembered for decades this postseason. He felled the MVP favorite, a player that looks like he could end up on basketball’s Mount Rushmore. The Klaw made history with the Raptors, and if he stays like he should, the rest of the NBA will be looking at a new King of the North for years to come.

Serena’s not changing her stripes

After the president of the French Tennis Federation, Bernard Giudicelli, banned catsuits from last year’s French Open, Serena Williams didn’t stop with just her tutu. Instead, she continues to lead the fight in the conversation.

In her first match of the 2019 French Open on Monday, Williams wore a black and white outfit that included a mini-skirt, a crop top over a mesh bodysuit and a cape-jacket. She later took off the jacket to reveal her sleeveless crop top. Once again, she made a statement about fashion — and about women’s empowerment.

Williams’ fashion statement clearly exemplifies an emboldened feminist message. As the words printed on her outfit stated, Williams is a “Mother, Champion, Queen, Goddess.” Of course, we already knew that about her — and she proved it when she won that first match. But the words carry a message not just for Williams, but for women everywhere.

We may not be able to play tennis like Serena Williams, but we sure can all be queens.

The curse of Paul Pierce

The past couple months have not been kind to Paul Pierce.

It started back in April, when the former NBA star-turned-analyst made the bold assertion that he had a better playing career than recently retired superstar Dwyane Wade, despite trailing Wade in most meaningful benchmarks like points per game, All-Star appearances and championships. He was rightfully roasted by his ESPN colleagues and trolled on social media.

Then came the NBA playoffs, with Pierce’s former Boston Celtics team meeting the Milwaukee Bucks in the second round. After the Celtics beat Milwaukee by 22 points in Game 1, Pierce — ever the unbiased professional — declared that the series was “over” in Boston’s favor.

Immediately following Pierce’s prediction, the Bucks went on to win the next four games in dominant fashion to send the Celtics packing.

Pierce waited a little longer to break out his busted crystal ball in the next series, which pitted Milwaukee against the Toronto Raptors in the Eastern Conference Semifinals. After the Bucks convincingly won the first two games, Pierce confidently tweeted that the Bucks “got this.”

As if on cue, the Bucks lost four straight games, sending Toronto to the Finals and making Pierce’s comments look less like coincidence and more like a full-blown curse to whatever team gains his favor.

The NBA Finals begin Thursday and plenty of television personalities will be giving their insights and predictions, none of which will mean very much. But with Pierce’s words carrying a seemingly supernatural weight, he may be the one analyst worth keeping an eye on. The Golden State Warriors, winners of four of the past five championships, enter as the heavy favorite, with an ensemble cast of All-Star talent — though one Pierce stamp of approval may be all it takes to end their dynasty.