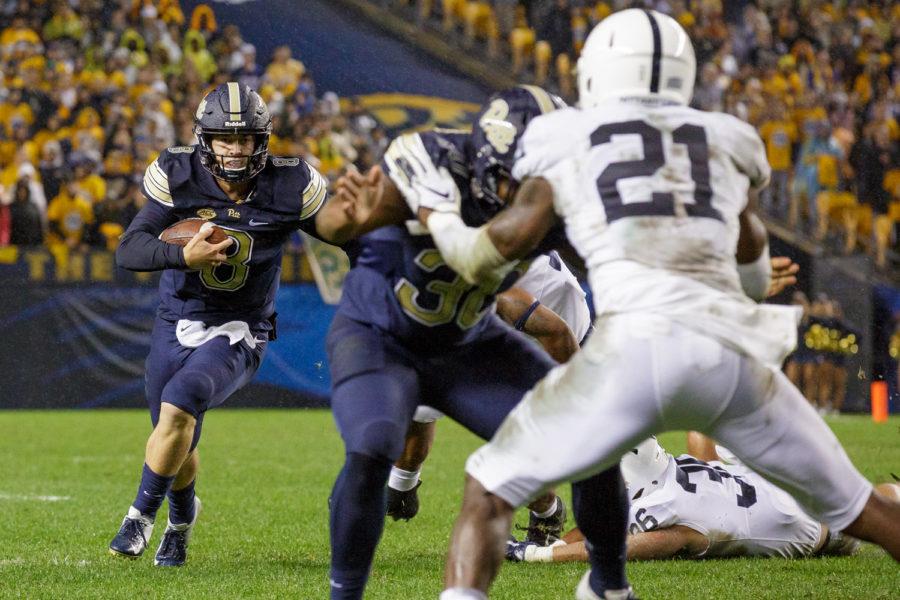 The start of Pitt football is still nearly three months away, but with the roster and schedule locked in, it’s never too early to start making predictions for the upcoming season. This article will break down each of the Panthers’ 2019 opponents on a game-by-game basis, describing Pitt’s most likely outlook.

There are some matchups where one team simply has the other’s number, year after year. In the same way that Pitt always seems to lose to North Carolina, the Panthers make up for it by annually dominating the Cavaliers. Since joining the ACC in 2013, Pitt has won five of six matchups between the two teams.

History isn’t always the greatest indicator of future success, and Virginia is certainly superior to Pitt’s typical pushover opening day opponent. Virginia also brings back its do-it-all leader on offense, senior quarterback Bryce Perkins. But the Cavaliers suffered several losses in other key positions to graduation, including leading rusher Jordan Ellis and leading tackler Juan Thornhill. With Narduzzi undefeated against Virginia in his four seasons at the helm, you can safely expect him to keep the ball rolling.

Seemingly every year, Pitt overlooks an opponent and suffers a loss that no one sees coming. Ohio is a prime candidate to shock Panther fans and take down Pitt at Heinz Field this season.

The Bobcats don’t technically play in a Power 5 conference, but they do play in the perennially underrated MAC, where they went 6-2 before crushing San Diego State in their 2018 bowl game. Ohio boasted an elite and high-flying offense last year, averaging 40.2 points per game — good for ninth in the nation.

The Panthers historically struggle against talented quarterbacks who love to air the ball out, and there are not many quarterbacks more talented than Ohio senior Nathan Rourke. Rourke stuffed the stat sheet last year, racking up 2,434 yards and 23 touchdowns through the air while adding another 1,047 yards and 15 touchdowns on the ground. Most of his top weapons from 2018 are gone, but Rourke alone will be enough to take down Pitt in what should be a high-scoring affair.

For the first time since the reinstatement of this in-state rivalry in 2016, Penn State will be without the services of its gritty leader, quarterback Trace McSorley, who was drafted by the Baltimore Ravens in April. McSorley’s departure, along with Pitt’s motivation to avenge last year’s ugly loss and end the current four-game series on a high note, may be just enough for the Panthers to pull off an upset in Happy Valley.

On paper, obviously, Penn State should and will be favored to win this game. The Nittany Lions routinely have among the highest ranked recruiting classes and have finished ranked in the top 25 each of the past three seasons. They also boast one of the most electric and intimidating homefield environments.

Yet without McSorley, nothing is a guarantee anymore. Redshirt sophomore Sean Clifford is McSorley’s most likely replacement, and Penn State’s spread offensive attack doesn’t put a ton of pressure on the quarterback to make tough decisions. But Clifford may not be fully acclimated to the big stage by Week 3, and the Panthers may be able to take advantage — as long as they can stifle first-year running back Ricky Slade, who was one of the most highly touted recruits in his class.

If not for a gruesome injury to standout quarterback McKenzie Milton, UCF may have never snapped its miraculous 25-game winning streak. But the Golden Knights’ reign finally came to an end against LSU in the Fiesta Bowl last season, where they lost 40-32 with first-year quarterback Darriel Mack Jr. falling just short.

Mack Jr. is now a sophomore and after a full offseason working with the first unit should be ready to start a new winning streak for UCF’s powerhouse system. When the Golden Knights’ offense is clicking on all cylinders, there’s essentially nothing the defense can do to stop it, and UCF will take down the Panthers for the second straight season.

Instead of starting their season with a “cupcake” game, the Panthers pushed their typical FCS matchup back to Week 5. Delaware resides in the same CAA conference as Pitt’s 2018 opening day opponent, Albany. The Panthers took care of business in that one, winning 33-7. There’s no reason to expect Pitt won’t do the same against Delaware — though it probably won’t be as lopsided as the last time the two teams met in 2014, when the Panthers pummelled the Blue Hens 62-0.

As with Virginia, the Panthers have dominated Duke in the Narduzzi era, winning all four meetings since 2015. These two middle-of-the-pack teams almost always keep the game close, but I give Pitt the slight edge with the Blue Devils losing talented quarterback Daniel Jones to the NFL Draft in the offseason.

The Orange finally broke through with a 10-3 record in 2018 after winning four games or less in the previous four seasons. Head coach Dino Babers has slowly been turning the program around after taking over in 2016, and Syracuse is expected to be one of the ACC’s top teams once again in 2019.

Dual threat quarterback Eric Dungey is finally gone, but in his stead lies another highly talented player — redshirt sophomore Tommy DeVito. DeVito was a four-star recruit out of high school and performed admirably as a backup last season, passing for 525 yards and four touchdowns. With home field advantage in what should be another offense-centered battle, Syracuse has the edge in this matchup.

With a defense that typically ranks among the nation’s best, the Hurricanes have given Pitt trouble in recent years. Miami has won three of the last four meetings, with its lone blemish being a 2016 upset. The Hurricanes should once again possess a stingy D. On offense, redshirt sophomores N’Kosi Perry and Tate Martell will engage in a quarterback competition throughout the offseason for the starting job, but whoever emerges will undoubtedly be a talent that could give Pitt’s defense trouble.

No matter what direction Collins decides to go, it’s always tough for a new coach to implement his new trademarks in his debut season. Georgia Tech will likely suffer in its first season after the Johnson era, and Pitt should be able to take advantage.

Could this be the year Pitt finally beats UNC? Since joining the ACC in 2013, the Panthers have miraculously gone winless against the Tar Heels, dropping all six contests despite the fact that UNC has rarely been a powerhouse team. I’m going to take a chance here and say that this is the year Pitt finally ends the streak — the Tar Heels bring back most of last season’s production but still went an ugly 2-9 in 2018 and should only be expected to improve marginally.

The Hokies have always put forth a consistently solid team, but the wheels started to fall apart in 2018. Injuries ravaged Virginia Tech’s roster, resulting in a 6-7 final record. The offseason saw mass amounts of players looking to transfer out of the program, including disgruntled quarterback Josh Jackson and several defensive linemen. Though the Hokies still bring back most of their production from 2018’s weak season, they’re still a program trending in the wrong direction.

Boston College’s conservative gameplan typically revolves around having a bruising tailback and a sound defense. The Eagles will have both those things in 2019, as they bring back star junior running back AJ Dillon along with most of their leading tacklers on defense. After rattling off three straight ACC wins, the Panthers will suffer a heartbreaker at home in their season finale.