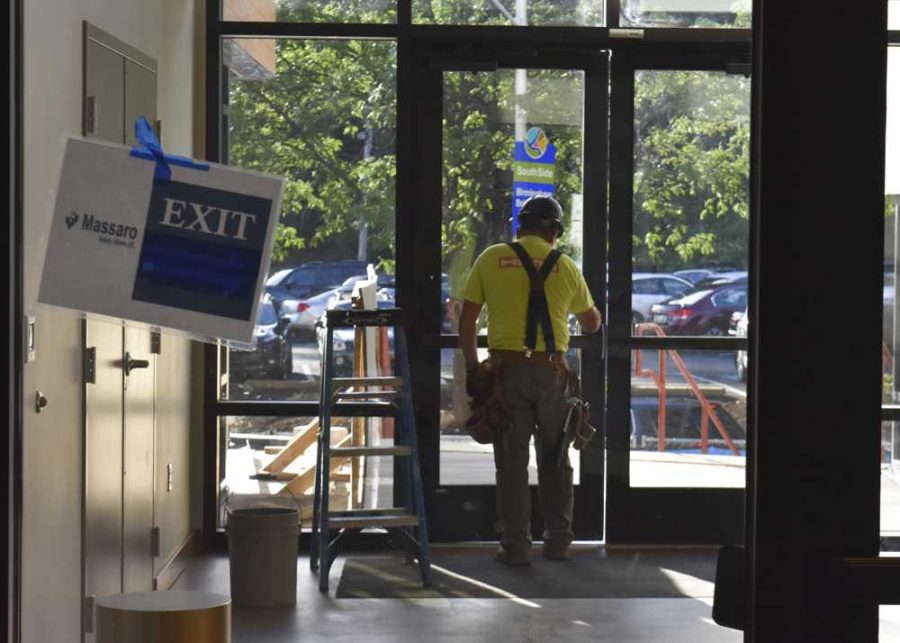 The 14-floor building, geared towards students and young professionals, opened in summer 2016 and features about 400 apartments. Madison Holden / Staff Photographer.

By Janine Faust and Jon Moss

This story was updated at 7:25 a.m. Friday to include comment from the Cardinal Group.

Renters at Cardinal Group’s SkyVue Apartments, located at the corner of Forbes and Craft avenues, say they’ve been couch-surfing since a Sunday afternoon fire in the building’s garage caused a power outage.

The 14-floor building, geared toward students and young professionals, opened in summer 2016 and features about 400 apartments.

Tony Dalesio, a junior pharmacy student, said he had just returned from vacation on Sunday when he found out about the electrical fire and the power outage. He has been staying at his parents’ house since. When he tried to get in touch with the leasing office on Monday, the phones were down. He has also been receiving email updates from building management, though he decided to move out from his unit this week.

“It’s been difficult since I was scheduled to move on June 30. I just decided to move out all my stuff now,” he said. “SkyVue has been having electrical problems for a while now — the elevators never work. I didn’t want to keep my stuff in there much longer.”

Pittsburgh police, fire and EMS units responded to the building Sunday afternoon and found “heavy smoke” pouring out of the building’s garage, Pittsburgh Public Safety spokesperson Chris Togneri told the Pittsburgh Post-Gazette Sunday. Togneri added that firefighters discovered what seemed to be an internal electric fire upon entering the building, but no injuries were reported as tenants self-evacuated.

But Campbell declined to comment on the cause of the fire or results of the inspection, referring reporters to Cardinal Group, the building’s owner.

In a statement, the Cardinal Group said power was lost in part of the building due to a water contamination issue. Since the City restored power, they are working to move all residents back in to their units as soon as possible

“Our onsite team will continue to communicate with the residents on all updates as soon as we have them,” the statement said.

The Cardinal Group did not respond to inquiries about claims from residents that the management company has been unresponsive to residents or that the SkyVue building has had previous electrical problems.

According to University spokesperson Kevin Zwick, Pitt is offering housing in a residence hall to displaced Pitt students and is encouraging them to continue to contact the property management company for updates about their unit. Zwick did not say how many Pitt students have accepted the University’s offer, or what hall they are being housed in.

Katherine Podvorec, a Pitt Law student, said she first went to her father’s house following the electrical fire, followed by a hotel since her sister is allergic to her cat. As of Thursday night, she said she is still unable to move back into her apartment because the building’s management had not restored power to every unit.

Podvorec said she contacted SkyVue’s management Thursday morning inquiring as to whether she could move back in or if she had to book another night at the hotel.

“I didn’t hear back [from building management] until 7:30 p.m., when they said if you haven’t gotten a phone call from us then stay where you’re staying,” Podvorec said. “I’ve been getting a daily email with updates, but they’ve always been kind of vague, like Duquesne Light is still working on the building, stay in your current accommodations until further notice. They said the leasing office is in the building and without power so they’re slow to responding to phone calls and emails.”

Podvorec said she wishes more information was being made available in a timely manner about when residents can move back in, as the lease for her new apartment does not start until July 1.

“I’d like to get back in there,” she said. “It’ been a lot, having to go to work at a new job [on Tuesday], figuring out what to do with my cat and wearing the same outfit every day.”