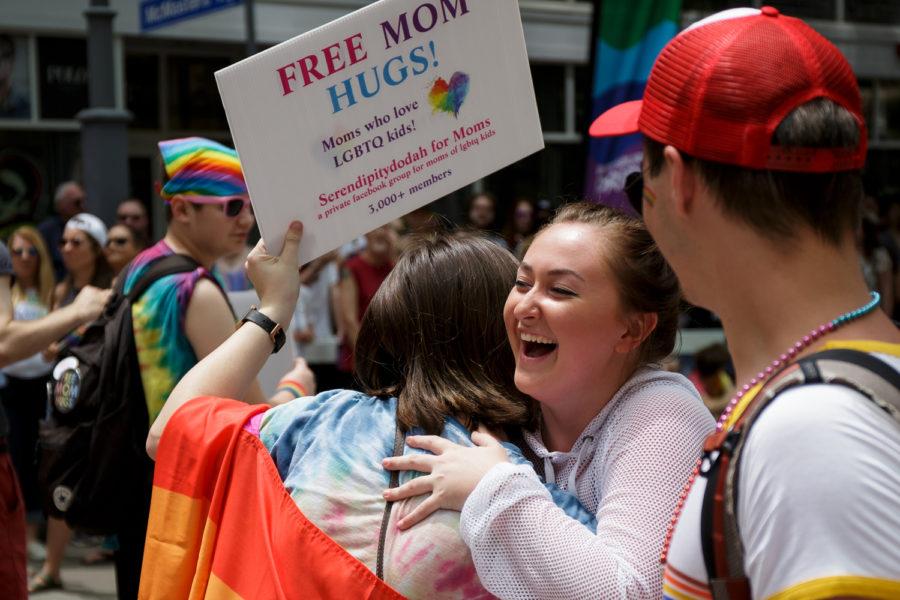 The Andy Warhol Bridge swarmed with people dressed in an array of glittering, feathered, skin-tight ensembles in every color of the rainbow on Saturday. Some carried flags representing the gay, bisexual, transgender and genderqueer communities. People held hands and kissed and danced through the streets in proud celebration.

Pittsburgh PrideFest took place from the afternoon of June 8 until the evening of June 9 on the intersection of the Andy Warhol Bridge and Fort Duquesne Boulevard. Booths sponsored by organizations ranging from UPMC to the Pittsburgh Frontrunners, an LGBTQ+ friendly running group that frequents the Schenley Park trails, were showcased during the two day event celebrating LGBTQ+ pride.

The theme for this year’s Pride, which was chosen by the Pittsburgh LGBTQ+ community in the fall via a vote on the Delta Foundation Facebook page, was “We Are One.” Christine Bryan is the director of marketing and development for the Delta Foundation, who organized PrideFest as well as the other Pittsburgh Pride events such as the Equality March. Bryan said she hoped the event would help unite the LGBTQ+ community and allies alike.

“I think it talks about the fact that we need to come together as one community regardless of our differences because we are stronger as one voice,” Bryan said. “In order to get to [equality] we need to have a loud and powerful voice.”

The theme of unity continued throughout the event by joining together people and organizations from a variety of backgrounds. At different stalls, people could purchase fans, shirts and art designed by members of the community. LGBTQ+-friendly churches, social organizations and advocacy groups like the ACLU also handed out water and fliers to passersby.

A highlight of this year’s festival was the Check Your Blindspots Unconscious Bias tour, which made its first appearance at PrideFest this year. Check Your Blindspots is a mobile exhibit housed in a tour bus that aims to help people uncover their own unconscious biases and learn ways to become more inclusive of others in their day to day lives. Created by CEO Action for Diversity & Inclusion, the exhibit consists of interactive stations, such as the “through a different lens” viewfinder and the “perspective matters” virtual reality experience.

Kelly Strong — a Bridgeville resident and head of marketing for Highmark Health and Allegheny Health Network — hopes that AHN and members of the LGBTQ+ community can continue to work together to make efforts to achieve equitable healthcare, no matter a person’s sexuality or gender identity.

“Everyone needs an honest and good health care and they need providers that they can trust,” Strong said. “The relationship a patient has with their doctor is extremely unique and extremely personal and we have to take their privacy into consideration and care for them as they want to and should be treated.”

Whether it was to support local art and Pride culture or uplift those in the community, the thread of unity brought people together in many forms. For Kim and Jay Harrison of Lawrence County, this took shape in the form of hugs, as the couple each wore a shirt saying “Free Mom/Dad Hugs” and welcomed anyone with open embrace.

“We’re here because we have friends and family and a lot of people in our lives belong to this community, and I just don’t want anybody to not feel loved ever,” Kim said. “So if there’s anybody who’s here who doesn’t have a family who loves them, we can be their family.”

For Bryan, this concept is something that has driven her work with Pittsburgh Pride and the Delta Foundation this year. This year also marks the 50th anniversary of the Stonewall Riots, making Pittsburgh Pride and PrideFest more monumental to many in the LGBTQ+ community.

“For some people, it’s a chance to come out and be themselves because maybe they live in a town or live in a family or they may still be questioning,” Bryan said. “For some it’s a time to remember folks that we lost from the HIV/AIDS crisis. For others, it’s to remember a time when you couldn’t walk down the street, you couldn’t talk about your partner at work or you couldn’t tell your doctor.”

Bryan also hopes that this year’s “We Are One” theme will inspire more people to become allies and support change alongside members of the community.

“We like to stand for something, not against something,” Bryan said. “So we like to bring people together, start conversations. We believe you can have laws all you want, but you have to change people’s hearts.”