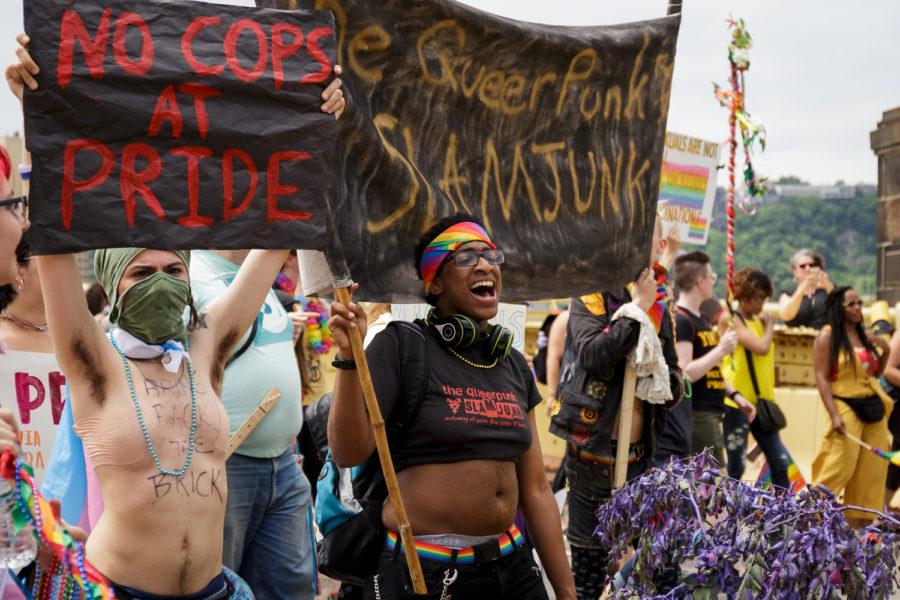 Three brown paper-mache figures led the People’s Pride parade as it moved through Downtown Sunday. There was Marsha P. Johnson, a drag queen and transgender activist known for her involvement in the Stonewall Riots. There was Miss Major Griffin-Gracy, another transgender Stonewall veteran who remains a prominent activist. And there was the “baby of the future.”

To the few hundred marchers in People’s Pride, the figures represented the past, present and future of the LGBTQ+ rights movement. And this Pride was more than a joyous affirmation and celebration of identity — though it was that too. It was a conscious alternative to the other Pride happening in Pittsburgh on the same day.

“Stand down, Delta,” the marchers chanted.

The Delta Foundation of Pittsburgh is the organization behind Pittsburgh’s other, larger annual Pride. As the People’s Pride parade marched down the Roberto Clemente Bridge from Downtown to the North Side, the colorful tents and banners of Delta’s Pittsburgh PrideFest were set up on the neighboring Andy Warhol Bridge, just a few hundred feet away. Later in the day, a much larger group of celebrators would gather there for Delta’s Pride.

Fifty years have passed since the Stonewall Riots, the 1969 series of demonstrations at New York City’s Stonewall Inn that kicked off the modern gay rights movement. The first gay pride parade was held one year later in remembrance of the riots, and every year since, there have been more. And since 2017, Pittsburgh has had two competing marches.

People’s Pride, organized by the transgender-centered shelter and activist group SisTersPGH, offers a Pride centered on the trans members and members of color of the LGBTQ+ community. Ciora Thomas, the activist behind SisTersPGH, stood on the float at the front of the parade, holding a modernized Pride flag which includes stripes for the transgender community and LGBTQ+ people of color.

Delta’s Pride has been criticized by some as a corporatized, whitewashed version of Pride that ignores the movement’s roots. In comparison, the marchers at People’s Pride yelled the story of those roots as they marched through the streets.

“First pride was a riot! Queers, don’t deny it!” they chanted.

Briar Sommerville, who passed out Pride-themed Pitt T-shirts at the parade alongside other members of Pitt Queer Professionals, said their group chose People’s Pride over Delta’s for a variety of reasons.

The Delta Pride’s ties to corporate interests were one reason, they said. But also, it’s just cheaper to table at the People’s Pride.

“It makes more sense for us to hang out with all these lovely small nonprofit groups,” Sommerville said.

Meredith Donaldson, a Pitt graduate student in the physician assistant’s program, took one of the T-shirts.

Donaldson said she hadn’t even known there was a difference between the two Prides, so she didn’t weigh different options when choosing which Pride to go to. But it seemed obvious for her to go to at least one of them, Donaldson said.

“I believe that everyone should have equal rights, especially everyone in the LGBT community. I grew up in a very accepting household,” Donaldson said, adding that her sister and stepsister are both lesbians. “It’s always been pretty common knowledge for us to be accepting of people who are different.”

Sylvia Lin, who works in the epidemiology department at Pitt, attended with a group who called themselves “Pittsburgh Taiwanese for Equality.” Holding the Taiwanese flag high, the group wanted to tell the march’s attendees and observers something they might not have already known — that in May, Taiwan became the first country in Asia to legalize same-sex marriage.

“We want people to know that Taiwan is the first country in Asia to legalize same-sex marriage,” Lin said. “We think it’s a really important milestone for Asian countries, and we hope other countries can support same-sex marriage.”

Though the People’s Pride march wasn’t as large as Delta’s Pride, the marchers shouted, played instruments and sang loudly to make their presence heard as they marched through the streets. Thomas led them in a traditional labor standard, replacing Malcolm X’s name with the names of trans women of color.

The marchers knew their answer.

“We’re on the freedom side!” they shouted.