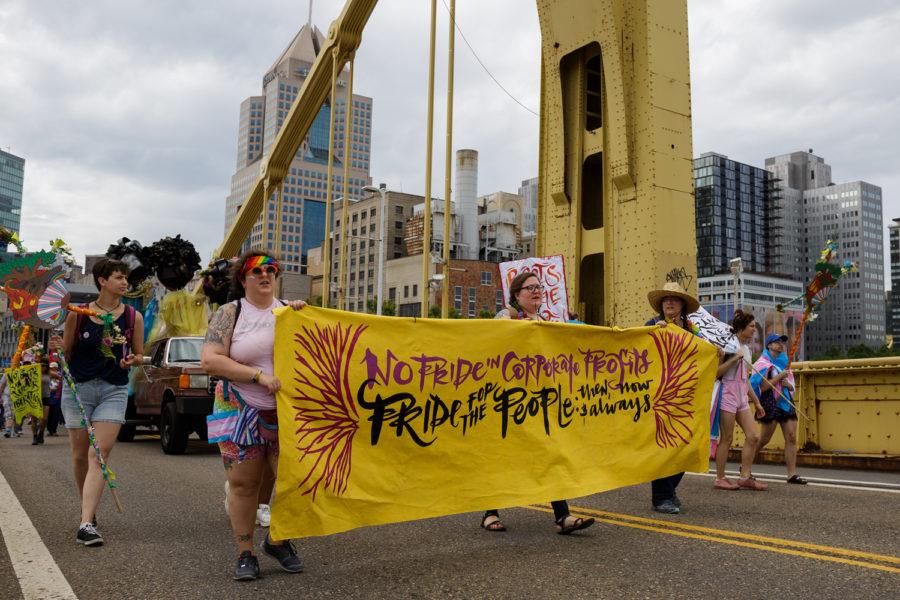 A banner calling for the exclusion of corporations in pride.

Support for the LGBTQ+ community has dramatically increased over the last two decades. Yet with that support, the controversy and battle over corporate representation has become more prominent in proportion.

Every month, a new company or creator is called out for queerbaiting in their promotions or content. Recently, Calvin Klein has come under fire for an advertisement that featured LGBTQ+ themes but no LGBTQ+ actor representation. Frustrated, some members of the LGBTQ+ community have determined that all coroporate profit off of the LGBTQ+ is unacceptable and that the corporatization of queer identity must be stopped.

Unfortunately, the United States is a capitalist society, and until there is a communist revolution, a coup d’etat dictatorship or nuclear war, companies and the media have to make a profit from their ventures. With the growing support behind the LGBTQ+ community, corporate America has found a new market to exploit. While the corporatization can be bad, there are ways to ethically market LGBTQ+ inclusiveness. Companies need to adopt these principles, and it is our job to hold them accountable.

Recently, the public has stepped up to hold Calvin Klein accountable for an advertisement they ran the week before the start of Pride month in June. In the ad, the company attempts to capitalize off of a homosexual kiss and embrace shared between model Bella Hadid and robot, AI influencer Lil’Miquela, to demonstrate their support of the LGBTQ+ community. Their intended message from the ad wanted to touched about issues of reality and identity. But Twitter users quickly called out the ad as fake representation and queerbaiting, because it does not include any influence from real LGBTQ+ people or their issues since the actresses are straight and a robot, respectively, in real life.

If Calvin Klein had used an LGBTQ+ actor, the advertisement may have come across as more sincere to the struggles of the marginalized community. However, this does not erase the fact that Calvin Klein attempted to turn a profit off of sympathy for the struggles of a community that they have not experienced first-hand. It is inevitable that companies need to make some kind of profit, but the company could have at least donated a percentage of that profit back toward the people they exploited. Though this doesn’t make up for bad representation, at least the LGBTQ+ groups would benefit.

There are companies, however, that seem to be moving in the right direction. At the beginning of June, Budweiser launched a line of nine beer cans decorated with the flags of different sexual identities under the LGBTQ+ umbrella in the UK. The line included the flags for identities that are lesser known to the general public such as grey-ace asexual and genderfluid.

Most people know about and support homosexual relationships to some degree. Surveys from the Pew Research Center collected statistics and found that 61% of Americans support homosexual marriage. So it is relatively “safe” for companies to artificially show their support of gay, lesbian and bisexual identities with a vague message of support once a year when June rolls around.

When Budweiser broadcasts lesser-known identities, statistically, they are taking more of a risk or rather showing that they have some skin in the game. This kind of representation goes beyond a rainbow filter over social media profiles, as it exposes the public to dialogue surrounding these identities. While they profit off of the can campaign, they made the effort to educate in tandem with marketing.

Budweiser is also the sponsor for the Pride march in London, and the extra effort comes across as more sincere towards the struggles of the community. It doesn’t erase that a corporation is making a profit from the LGBTQ+, but they have specifically tailored the way that they make their profit so it requires masses of people to expose themselves to marginalized identities and their struggles, normalizing a once ostracized and persecuted group.

While corporations must continue to profit, consumers can still hold them to a standard in how they profit off of minority identities. Profit is an integral part of the economy, but the consumer can utilize a company’s need for profit to hold them accountable. America is entrenched in the age of consumerism, but from Twitter callouts to organized boycotts, those who are exploited can make their voices heard and demand better.