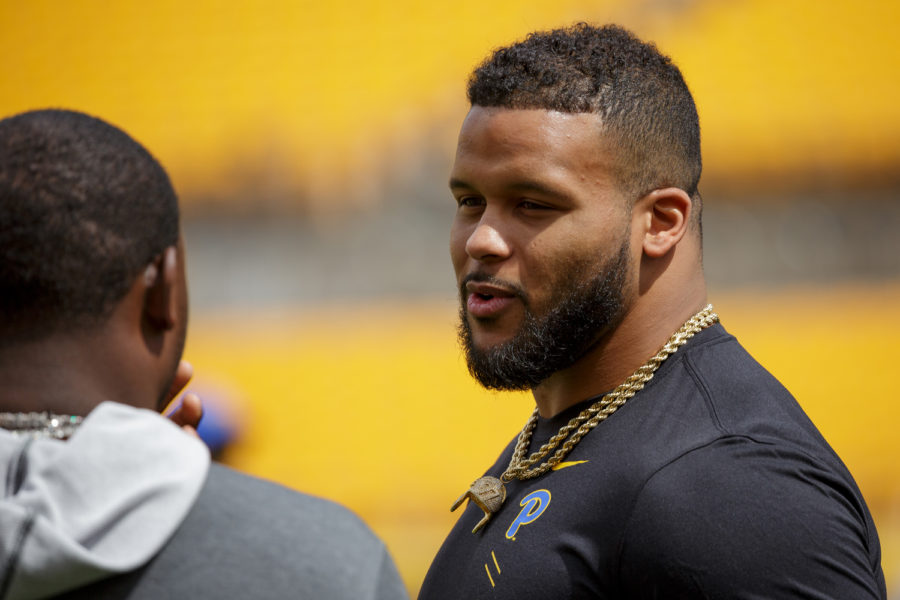 Aaron Donald’s April pledge of a seven-figure donation to Pitt’s football program will have an impact on the program for years to come. Now Pitt has put Donald’s legacy in writing, adding his name to its football training center.

The ground floor of Pitt’s Duratz Athletic Complex at the South Side practice facility is now officially the “Aaron Donald Football Performance Center.”

Unveiled last Wednesday, the facility’s new name recognizes the historic seven-figure donation to the Pitt Football Championship Fund which Donald, a former Panther and current defensive lineman for the Los Angeles Rams, made in the spring.

Donald, now 28, has remained involved with Pitt football since leaving the program in 2013, sometimes working out with the team during summer training in the practice rooms that now bear his name. At the unveiling, he was overwhelmed by the sight of his name on the front and back entrances to the training facility.

“This is the school that I watched on TV as a kid and I dreamed about playing for,” Donald said. “For it to be here, in my hometown, at a university that I grew up cheering for and wanting to play for, and coming full circle, how I did, you can’t write that story better than that.”

Donald came to the Panthers from Penn Hills High School and quickly established himself as a top defensive player, winning accolades including the Bronko Nagurski Trophy and the Chuck Bednarik Award in his senior year. Drafted by the Rams with the 13th pick in the 2014 NFL draft, Donald has consistently been ranked as one of the top defensive players in the NFL and has been selected to play in the Pro Bowl every year since.