Cudd’s freshman year: affordability, unionization and plans for the future 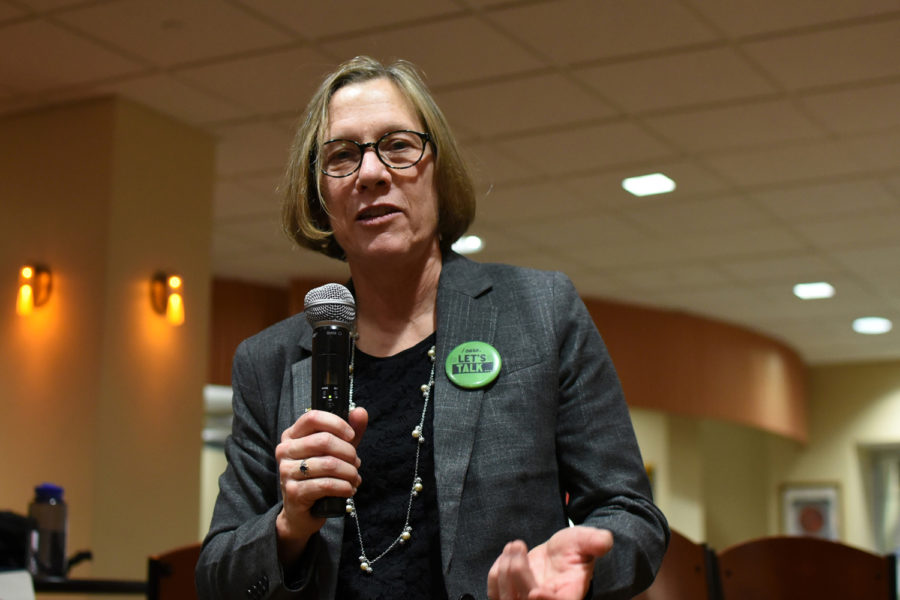 Provost Ann Cudd speaks at a Student Government Board meeting on Oct. 24, 2018.

After one year of leading Pitt’s academic programs, Provost Ann Cudd has her sights set on Pitt’s future.

Like many newcomers to Pitt, Cudd’s first year was somewhat of a whirlwind, filled with meetings with students, staff, faculty and administrators, while she became more familiar with Oakland. The Pitt News talked with the provost on June 11 about her first year at Pitt, touching on college affordability, the Tree of Life massacre, unionization efforts and other topics.

Reflecting on a “great” first year, Cudd said she is excited to be back at Pitt — she earned an MA in philosophy, an MA in economics and a PhD in philosophy in the mid-1980s from the University.

Cudd said Pitt has made great strides toward closing the financial need gap — the difference between the cost of tuition and what a student can pay with the help of institutional financial aid. Two initiatives were announced this year to help close that gap for more students — Panthers Forward, where students receive a credit of up to $5,000 towards federal loans while promising to “pay it forward” for future students following graduation, and the Pitt Success Pell Match, where the University will match federal Pell grants.

On a larger scale, Cudd said there is a “crisis” in college affordability sweeping the nation, but added that Pitt is doing its best to help students stay in school.

“The Pitt Success, the Pell [Grant] match, was aimed specifically at lower-income students who might even think that a Pitt education is out of their reach, and we hope to say, ‘Well, no, this is, we’re going to help you, we’re going to make a difference,’” Cudd said.

Cudd also said the University is doing its best to keep tuition as low as possible. Pitt’s annual funding request to the Commonwealth government requested a 6.5% increase in funding, which would be paired with tuition increases of about 3% for in-state students and 5% for out-of-state students. It is unclear how tuition prices will be affected if Pitt does not receive its requested funding.

Tree of Life and the Rosfeld acquittal

The Tree of Life massacre occurred on Cudd’s birthday, and said she’ll now “never forget that date.” But Cudd said she was moved by the community response to the tragedy.

“I was so moved by the event that students put together, helped put together to recognize what happened, to bring the community together,” Cudd said.

“I think our position was to support students in their … grieving, in their protest of the City, of the laws of the state of Pennsylvania which made it possible for the jury to acquit the officer, and I think that was the right way to support,” Cudd said. “Clearly there was a tragic situation that was then exacerbated by the acquittal of the police officer.”

Cudd also brought up the suspicious activity at the end of the spring semester, where women were seemingly being targeted on campus. She encourages students to present any concerns about safety to the administration.

Cudd added that Pitt police Chief James Loftus and Associate Vice Chancellor of Public Safety and Emergency Management Ted Fritz are working to improve the current University notification system, which is split into two “emergency” and “crime” lists. In the past, students have said they had not heard of the crime list, which is opt-in, as opposed to the emergency list which students are automatically subscribed to.

Cudd said there is a “very fine line that has to be drawn” in providing information to the public while not causing panic.

Cudd said she is committed to increasing the diversity of Pitt faculty. She said some efforts, such as providing funding to deans to make targeted hires of underrepresented minorities, are already underway. But she added that the University must also rethink some of its hiring processes.

“For instance, we have a checklist of best practices of hiring practices that we ask every dean to present when they make the request to actually finalize a hire,” Cudd said.

Cudd also said she has a vice provost working on a to-be-announced, multi-year cluster hiring initiative. As implemented at other universities, cluster hiring involves employing faculty in multiple departments around interdisciplinary research topics, or “clusters.” Pitt spokesperson Kevin Zwick said more information about the effort would be forthcoming.

Cudd also discussed the two unionization campaigns on Pitt’s campus — one led by graduate students and another championed by faculty. Grad students voted against unionization in a yet-to-be-certified April election by a margin of 37 votes. The Pennsylvania Labor Relations Board held a hearing in mid-May to discuss “unfair labor practices,” which union organizers say the University committed during the election. The PLRB is also hearing a case involving the faculty union, in which union organizers allege the University blocked them from reaching the 30% threshold necessary to call a unionization election.

When asked about the University’s payments of nearly a quarter-million dollars between summers 2016 and 2018 to “union avoidance” law firm Ballard Spahr, which were first reported by The Pitt News, Cudd said it was a “good use of [University] funds.”

“We hire that firm to do a lot of different work for us, in terms of employee-employer relations and HR and things like that,” Cudd said. “I think they’re a great firm. They’ve been serving us well.”

Cudd added that she believes Pitt has discretion in spending money, as long as its actions serve the “best interests of students.”

“You know, our position with respect to the union is based on what we think best serves the interests of students … this seems like a reasonable way for us to use our funds,” Cudd said.

But when asked whether the University should have recognized the union from the start instead of starting a lengthy series of legal battles, Cudd said that wouldn’t have been a “responsible position to take.”

“I think it would have been irresponsible for us, as an administration, to invite the union … to be the bargaining unit, when, in fact, it seems like our students and our faculty, as a whole, don’t particularly want that,” Cudd said.

The upcoming academic year will be the “Year of Creativity,” continuing the tradition of declaring a theme for the year that students and faculty can “think about and move forward.”

Cudd said she is excited for the different schools and student groups at Pitt to embrace the theme of creativity for the year.

“I think that creativity is one of those things that we as a University community really want to inspire in our students, and want to encourage — in not only our students, but our faculty as well — after all, research and discovery depends on creativity,” Cudd said.

Cudd said the leaders of Pitt’s Center for Creativity, Jeanne Marie Lasks and Kit Ayars, will co-chair the committee directing the effort. Cudd added that the committee is interested in finding convocation and commencement speakers who can speak to the theme of creativity.

Changes are also coming to Pitt’s Honors College in the next academic year, with a new dean and an overhauled admissions model.

Audrey Murrell, former associate dean of the College of Business Administration, took over as acting dean of the UHC on June 17 after the June 1 departure of the previous Honors College dean, Brian Primack.

The Honors College will be switching to a so-called membership model beginning in the next academic year, where students are admitted to the program as part of the admissions process. Cudd said the change was the vision of then Dean Primack and was driven largely by the fact that Pitt is now able to compare itself with honors colleges at other universities.

“It’ll also allow the students to develop a cohort, a sense of belonging to that organization, something that students often want,” Cudd said. “I think that Pitt will turn out to be ranked among the very top of these honors colleges.”

Cudd expects Murrell to do a “great job.” Murrell will serve as acting dean for at least two years in order to lend stability to students and faculty as the UHC model changes.

After more than a year and a half of planning, Pitt released the final version of its Campus Master Plan in February. The plan includes major renovations and expansions to existing facilities as well as the construction of several new academic and housing buildings, all to be completed within 20 to 30 years. Included in the plan is new student housing and a new student recreation center on O’Hara Street.

But some have voiced concerns about the uncertain future of Pitt’s historic Music Building, located at the corner of Fifth and Bellefield avenues.

Cudd said the building’s fate is currently in the hands of Greg Scott, Pitt’s senior vice chancellor for business and operations, as it is viewed as a facilities issue, and a solution is not prescribed in the master plan.

“Practice spaces are also really needed, so we’re working to try to find a good solution to that, whether it’s upgrading the facilities that exist right now or moving them to other facilities,” Cudd said.

Cudd added that the current Plan for Pitt, the University’s four-year strategic plan, expires at the end of the next academic year, opening the door to re-examining where Pitt is heading.

Cudd said in her work as provost, she works hard to “make the quality of Pitt education better and better every year.”

“Students are making me proud everyday, and also the faculty,” Cudd said. “They are constantly surprising with their accomplishments and achievements and I just want to keep that going.”