Context: June Board of Trustees meeting 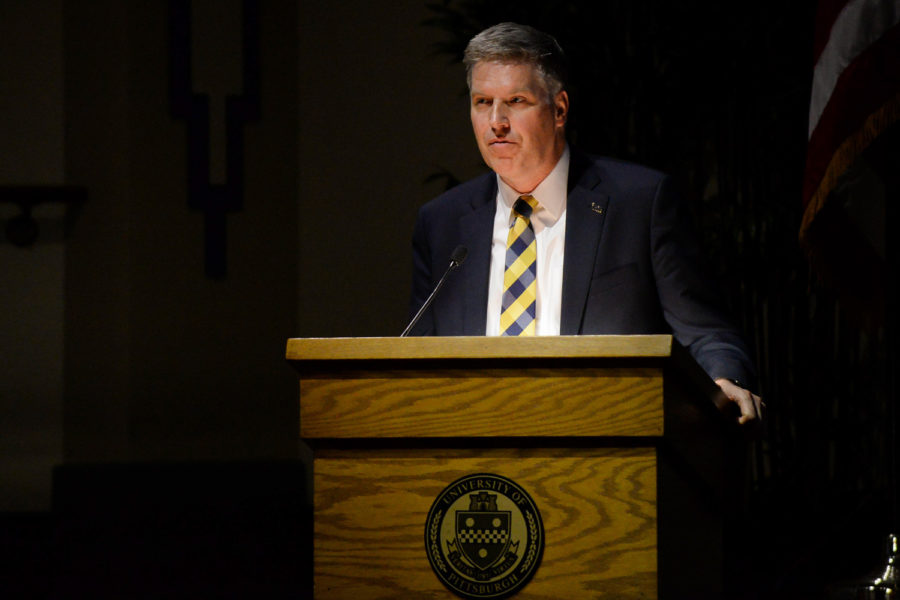 Chancellor Patrick Gallagher at a Board of Trustees meeting on Feb. 23, 2018.

Pitt’s Board of Trustees will hold its second meeting of 2019 Friday, providing an update on University affairs to the community. The Board is responsible for all key decisions at the University, including creating the annual budget and setting tuition prices. The board will meet Friday at 10:30 a.m. in the William Pitt Union Assembly Room. As the meeting approaches, here are some of the topics the Board might discuss:

Pitt initially requested a 6.5% increase in Commonwealth funding, to be paired with a 3% tuition hike for in-state students and a 5% hike for out-of-state students. State legislators allocated a 2% increase in funding, and it is unclear how Pitt will resolve the multi-million dollar hole in its budget since it received less than it asked for.

In recent years, Pitt has been under pressure from student groups to divest its endowment from fossil fuel investments. According to The Guardian, part of Pitt’s endowment as of November 2017 was invested in EnCap Energy Capital Fund IX-C, a Cayman Islands hedge fund, which was revealed in the Paradise Papers scandal last year.

But divestment is gaining traction with other area investment funds — Mayor Bill Peduto announced on June 5 he would like the City to divest its pension fund from fossil fuel, firearms and for-profit prison companies. In a letter to the Comprehensive Municipal Pension Trust Fund, the seven-member board which controls the fund and on which the Mayor sits, Peduto said the City has a history of using “both moral and financial authority.”

“The City’s leadership as a socially responsible investor has helped to advance just causes and helped to lead to formative social change,” Peduto said. “A similar time is upon us to act and provide leadership.”

Pitt’s Fossil Free Coalition, the main activist group pushing for divestment, sent a letter on April 3 to Chancellor Patrick Gallagher requesting he provide an update about the University’s work towards divestment.

In an April 10 response to the letter, the chancellor said Pitt is taking a multi-pronged approach to dealing with how to invest the University’s endowment.

Gallagher said the University’s main investment strategy is set by the investment committee from the Board of Trustees. But Gallagher added that, separately, the University Office of Finance is working on an environment, social and governance policy which would be incorporated into the process of selecting funds and managers for the endowment. Gallagher also said he viewed the report that the Socially Responsible Investment Committee is working on, which he described as “forthcoming,” as a “key” resource in developing the ESG policy.

Pitt released a finalized version of its Campus Master Plan in February, which provides a 20- to 30-year roadmap for the University. The plan includes major renovations and expansions to existing facilities as well as the construction of several new academic and housing buildings, all to be completed within 20 to 30 years.

Included in the plan is new student housing, as well as an O’Hara Street student recreation center to be built on the current site of a parking garage and Pitt’s Learning Research and Development Center. At a February town hall, some community members, and the chair of Pitt’s music department, voiced concerns about the uncertain future of University’s historic Music Building, located at the corner of Fifth and Bellefield avenues.

Editor’s note: A previous version of this article said the board meeting would occur in July, not June. The Pitt News regrets this error.