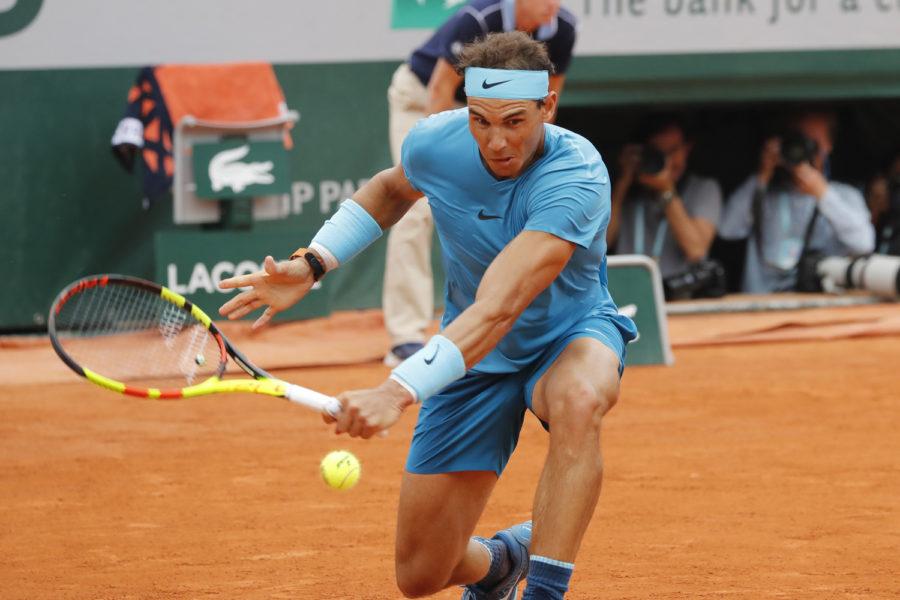 Rafael Nadal of Spain in action against Dominic Thiem of Austria during their final match on Sunday, June 10, 2018, at the French Open tennis tournament at Roland Garros Stadium in Paris.

No man has ever beaten Rafael Nadal in a French Open final. And after he secured an unprecedented 12th title on the Parisian red clay two weeks ago, it’s hard to believe anyone ever will.

During the final, Nadal put on a 3-hour 4-set clinic, blasting bruisingly angled groundstrokes and line-licking serves past his opponent, Dominic Theim, to claim his 18th overall grand slam — the closest he’s ever been to all-time leader Roger Federer, who sits perched atop a trophy case of 20.

But with Wimbledon, the sport’s most prestigious grass court tournament, starting next week, reporters wasted little time congratulating the champion. Only minutes after Nadal put his hands — and teeth — all over the Coupe des Mousquetaires, they wanted to know two things. Could he catch his great rival’s grand slam count? And could he close the gap even further at this year’s Wimbledon?

There’s no easy answer to the first question — commentators and sports journalists have debated Federer and Nadal’s accomplishments for years. But the answer to the latter is clear — no, Nadal won’t beat Federer at Wimbledon and probably never will again.

Yes, Nadal dismantled his great rival in straight sets during the French Open semifinal, but Wimbledon is Federer’s lawn — he holds eight titles there. And after a successful 2019 season, Federer looks primed to mow down all his opponents, including Nadal.

Federer wrapped up an impressive win at the Gerry Weber Open in Germany on Sunday, a lower-level grass court tournament. He now commands a 5-0 record on grass this year. Nadal, on the other hand, is resting comfortably at his home in Mallorca, Spain, after a grueling clay court season that yielded, by his standards, disappointing results.

Nadal looked far from his old impervious self on clay this year, after a recurring knee injury sidelined him for six weeks before his first clay tournament. He shook off the rust in time for the French Open, but still failed to reach the finals in the season’s first three clay tournaments — Monte Carlo Masters, the Barcelona Open and Madrid Masters — that he’s won with ease in years prior.

Despite Nadal’s struggles this year, he thinks he can win Wimbledon, even though he’s had a lot less success on grass in recent years.

“I [feel] ready to go all the way [at Wimbledon],” Nadal said in a press conference after his French Open win.

But the problem is this: The French Open isn’t a crystal ball for predicting Wimbledon results, never has been. Nadal commands 12 French Open titles, but has only triumphed twice at the All England Club. Federer, on the other hand, holds only one French Open title but eight at Wimbledon. In fact, before last year, Nadal hadn’t even made it past the fourth round of Wimbledon since 2011 — a stretch in which he won the French Open five times.

Those results may seem surprising since the two tournaments fall only weeks apart, but grass is just a completely different surface — the ball bounces lower and skids off the ground at a much faster pace. Federer possesses the perfect toolkit for grass — a precise serve, aggressive groundstrokes and a nasty, low-bouncing slice — to pierce Nadal’s defensive game.

Nadal’s high topspin forehands and tarp-like court coverage foil his opponent more effectively on the slow, high-bouncing clay — and that’s how he beat Federer in straight sets at this year’s French open.

Still, this was Federer’s first time playing at the French Open in four years — he withdrew in 2016 with an injury, and in 2017 and 2018 to prepare for the Grass season — so we’d hardly expect him to keep up with the greatest clay court player of all time. Nadal’s relentless baseline game and precision passing shots were simply too much for Federer — and they always have been. Federer is 0-6 against Nadal at the French Open.

But that’s not a worrying statistic once the two champions reach Wimbledon. After only one of those six French Open meetings has Nadal gone on to beat Federer at Wimbledon. Nadal steamrolled a mono-stricken Federer in 2008 in the French Open final, only dropping 4 games en route to the title. But he still needed five sets and nearly five hours to beat Federer in that year’s Wimbledon final, which many commentators now call the greatest match of all time.

If Nadal, who was undefeated on clay that year, could barely beat an ill Federer at Wimbledon, he certainly can’t do the job this year after being far less dominant for the first half of the season.

Fortunately for Federer, Nadal’s game — not to mention his consistently injured knees — are more likely to buckle on a faster surface like grass, where big-serving power-hitters rule. He may be nearly unbeatable on clay, but at Wimbledon, he really needs to get off Federer’s lawn.