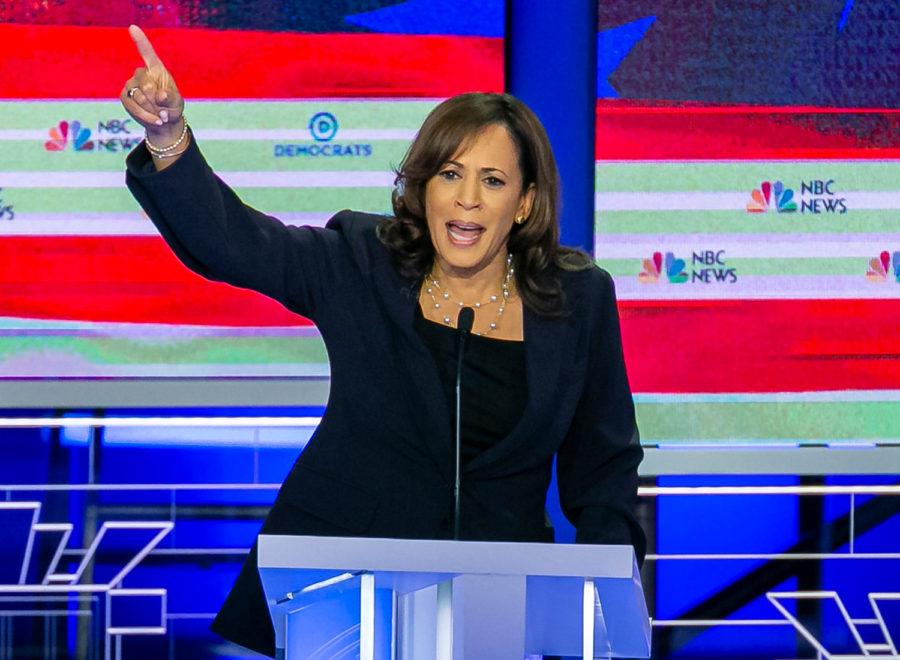 When asked what kind of presidential behavior Americans can expect next term, Sen. Kamala Harris, D-Ca., made a deliberate point to use female pronouns in her response during the June 27 Democratic Primary Debates.

“I will ensure that this microphone, that the President of the United States holds in her hand, is used in a way that is about reflecting the values of our country,” Harris said.

It made me weep like Lady Gaga in “A Star is Born.” Her statement radiated a profuse sense of hope, indicating the possibility of a brighter future for women in America. Even without explicitly focusing on gender, Harris managed to indicate that women are in this game to win it. That’s why Harris’ statement — a normalization and almost nonchalant glimpse at women in power — was so moving.

Questions regarding women in the White House have become prominent in the 2020 election, where female electability, or the continued debate as to whether women candidates can attract voters, has arisen as a pivotal issue among democrats. A fundamental contributor to this is our inherent focus on a candidate’s gender — either in an effort to bolster women in politics or preserve the current patriarchal hierarchy of men in power. As voters, we must have the courtesy and courage to judge them based on their platforms, not solely our perception of their ability to break the glass ceiling. By lending an attentive and respectful ear to all candidates, both male and female, we can act in an authentically feminist and genuinely democratic manner.

This obsession with female electability has manifested in two primary forms — first, the argument that it is “too risky” to nominate a female candidate and, alternatively, the belief that only a woman can save us from the current political climate.

With the result of the 2016 election fresh in our minds, the question of what made Hillary Clinton so “unelectable” proves a double-edged sword for the female candidates of this election cycle. Political reporter Amy Chozick interviewed five of the women running for president and found the looming stain of the last election is a major hurdle that they’re being forced to jump over.

“These women have seemed stuck in a sort of political purgatory, firmly, frustratingly sandwiched between Hillary’s loss and the country’s (eventual?) realization that a woman can be president,” Chozick wrote. “Clinton’s defeat has, for the most part, been more of an albatross — a sign of ‘See? We told you the country wasn’t ready.’”

But a June 2019 study from the Reflective Democracy Campaign should put this “electability” argument to rest. It found that when women ran for office, they won at the same rate as their male counterparts. This was true both for white women and women of color. Statistically, a female candidate has as much of a chance of beating President Donald Trump as a man. In defense of the Democrats, it makes sense that some fear a woman would not win, as the only female major party candidate lost to this very opponent just a few years ago.

But consider the plethora of women who now hold other government positions and have been extremely successful. All of the leading female candidates, including Harris, Sens. Kirsten Gillibrand, D-Ny., Elizabeth Warren, D-Ma., Amy Klobuchr, D-Mn., and Tulsi Gabbard, D-Hi., have complex and elevated platforms that have already gotten them relatively deep into the 2020 race. It is illogical to assume women cannot have political success in a presidential run.

Tom Smyth, writer for the satirical site McSweeney’s, points out the hypocrisy in using Clinton’s near win as an indicator that this group of women will face the same fate.

“Americans, excluding those 65.8 million who made Hillary Clinton the person with the second most votes ever, just aren’t yet ready to elect a woman president,” Smyth wrote. “That’s why I think we need someone like Joe Biden, who’s a shining example of electability, and who has only lost two presidential elections before this one. Or even Beto O’Rourke, a person who can really unite people of all shades of white, and who is another pro at getting elected.”

On the opposite end of this debate, some argue that female candidates are the only people who can garner real success serving in the executive branch — just because they’re women. Farhad Manjoo, opinions columnist for The New York Times, made his plea for why “The Next President Should Not Be a Man,” explaining that women are our best shot at making real change in feminist politics.

“Electing a woman as president would deal a smashing symbolic blow to the patriarchy. How can even the most enlightened male candidate rebut that plain fact?” Manjoo said. “In 100 years, what will stand as the more appropriate response to the upheaval of the Trump years and of #MeToo — electing the first woman or electing a very woke man?”

It is a fair point coming from a ‘very woke man.’ Women have statistically gotten more policy, especially those aimed at benefiting women and families, enacted than their male counterparts. Female representation is absolutely necessary and indisputably important. The issue arises when we begin to favor electing a woman as a political statement over electing them as a testament to their commitments and breadth of experience. This mentality feels like giving women a (long overdue) participation trophy over allowing them to meaningfully compete for our trust.

Neither of these polarities will offer tangible change in the country. Both overlooking female candidates and putting the nominees in a pigeon hole based on gender prevent the party from nominating the most qualified person to beat Trump. Counting anyone out favors bias over logic.

I want a woman president. Female representation in politics, especially in a position of such influence, is critical for the continued progress of our democracy. Yet, there is something inherently anti-feminist about prioritizing a candidate’s gender rather than trusting their political competency, just as it is morally questionable and strategically improbable to argue that a woman would be unable to garner support.

I want a woman president, but I need a competent president, whoever that may be. Focusing on anything other than candidates’ abilities is not only a slap in the face to women who have spent their lives fighting to serve the country, but also hinders our ability to get the best person for the job.

Julia is a sophomore majoring in English Writing and Political Science. She writes mostly about social issues and politics. Write to Julia at [email protected]