Pittsburgher beats world no. 1 at Wimbledon, falls to Serena Williams 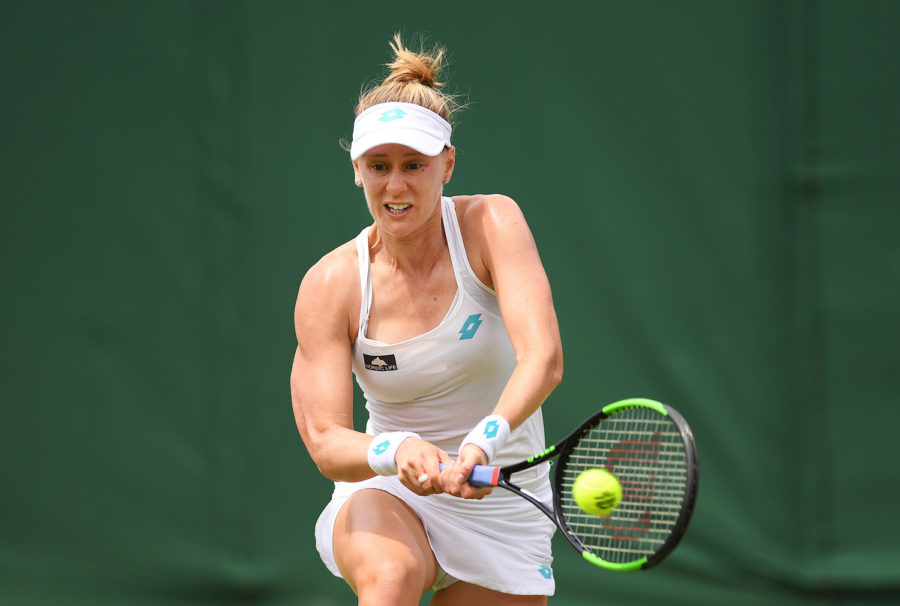 Alison Riske of the United States plays a backhand in her Ladies' Singles fourth round match against Ashleigh Barty of Australia during day seven of Wimbledon 2019 at All England Lawn Tennis and Croquet Club on July 8 in London.

Against all expectations, Pittsburgh native Alison Riske had 23-time grand slam champion Serena Williams on the brink of defeat in their Tuesday quarterfinal at Wimbledon.

The world no. 55 played some Riske-y tennis to break Williams early in the third set, blasting sharply angled returns past her opponent, who was slowed by an ankle injury. But her lead was short-lived. Williams managed to claw back and seal victory late in the decider — as she often has in her 51 grand slam semifinal appearances.

“I had to just button up and play hard,” Williams, who’s going for her eighth Wimbledon title, said after the match. “She was playing her heart out.”

She certainly was. This was the 29-year-old’s first run to grand slam quarterfinal in a professional career dating back to 2006, when she led Peters Township high school to a Pennsylvania girls’ state championship and won the singles championship. Riske, who seemed far from war weary after winning four matches en route to the quarterfinal, stuck right with Williams in the big baseline points. She only stumbled a handful of times on serve, when she double faulted facing break points.

“It’s no secret that Serena has an amazing serve. But Serena has an equally-as-amazing return,” Riske said. “I’ve never played anyone that has a return like Serena. That put a lot of pressure on my serve.”

Riske actually thrived on pressure moments throughout her run in the championships. She played the tournament of her life and notched some huge wins along the way — including her biggest career win over newly minted world no. 1 Ash Barty in the fourth round.

That match looked lopsided on paper, as does any match pitting the world no. 1 against the world no. 55. Barty won back-to-back titles at the French Open and The Birmingham Classic coming into Wimbledon, and many commentators named her this year’s Wimbledon favorite.

As Barty won the first set in 32-minutes, she looked primed to add to her 15-match winning streak and secure a place in the quarterfinals.

But Riske had other plans on that balmy Monday afternoon — she wanted to add to her own five-match winning streak on grass.

The match went back and forth until the end, when Barty sailed a backhand wide on match point to let Riske march on at Wimbledon.

“I didn’t play a poor match,” Barty said. “When I needed to, when the big moments were there, Alison played better. Tough one to swallow, but I lost to a better player.”

Riske’s win against Barty brought her 2019 grass court record to 14-1, better than most top 10 players. She credited her resilience and fighting spirit for getting her through a tough match with Barty.

“The biggest key for me has just been to battle from start to finish of every match that I’ve been a part of,” Riske said.

And she’s needed every ounce of fight — her breakout run was perhaps the most laborious of all the quarterfinalists. All five of her matches lasted three sets, including a marathon match against Ivana Jorovic in the second round that ended 9-7 in the final set. She beat three seeds at this tournament, who were all ranked higher than her.

But when the post-Wimbledon rankings come-out on Monday, Riske will be guaranteed a place in the top 40, closing in on her highest career ranking of no. 36. As for what’s next? She’s getting married in two weeks, and she called her nuptials a good omen for her performance on tour.

“I wish I could get married more often,” Riske joked after her win against Barty.

After that, it’ll be off to the U.S. Open, and Riske will see if she can replicate her Wimbledon run at a slam closer to home. But she said there was no better place to make her first real dent in a grand slam than at Wimbledon.

“The fact that it’s at Wimbledon, my favorite grand slam, the place that I had always dreamed to be in the last eight, they can’t kick me out now,” Riske said gleefully after her win over Barty. “I’m here to stay!”