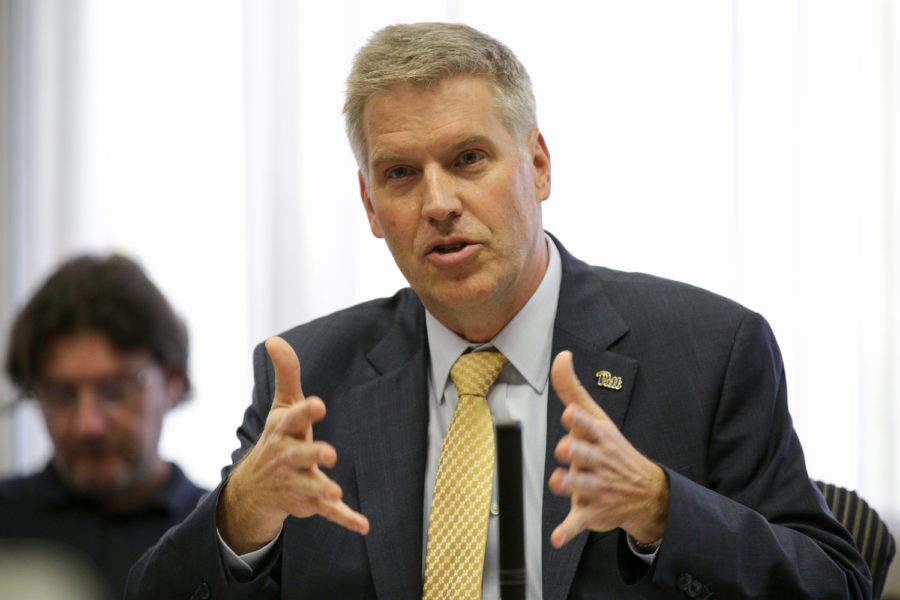 Chancellor Patrick Gallagher addressed the University’s admission process in relation to the FBI’s Operation Varsity Blues at the most recent board of trustees meetings.

At a public meeting in Posvar Hall Wednesday afternoon, the executive committee of Pitt’s Board of Trustees approved a $2.4 billion operating budget for fiscal year 2020.

In an interview after the meeting, Chancellor Patrick Gallagher said Pitt implemented $12 million in cost-cutting measures in the budget and has tried to maintain affordability for students.

“We always try to hold the increase as low as possible,” Gallagher said.

Chief Financial Officer Hari Sastry said after the meeting that a larger tuition increase was necessary for SSOE and SCI due to a higher cost of providing education in those schools.

Pitt, through its status as a state-related university, receives an annual appropriation from the Commonwealth to offset some tuition costs for in-state students and for rural education programs. The University requested a 6.5% increase in funding for the upcoming year, but since it only received a 2% bump, Pitt was left to fill an almost $20 million hole in its budget.

Sastry said after the meeting that Pitt created its budget conservatively and had room to adjust once the University’s Commonwealth funding was determined.

“We actually kind of built our budget on kind of a conservative estimate of what we think we can do at various different levels,” Sastry said. “We didn’t really cut any programs, as much as we said, ‘Alright, we want to figure out how we can be more aggressive on savings.’”

Gallagher and Sastry noted the largest cost increase in the University budget is financial aid, but said the University is taking care to balance its budget while expanding these programs. The Board of Trustees’ investment committee voted unanimously in late June to divert some funds from the University endowment to cover costs for financial aid programs.

“We’ve been doing a lot to try to really, you know, put the investments we have to work for students,” Gallagher said. “We think over the next five years, this sort of right-sizes itself again, and we’ll be in a better situation.”

The budget also includes an increase in the mandatory student activity fee, after receiving unanimous approval from the Board of Trustees’ student affairs committee in late May. The increase, the first in nearly 15 years, will pay for expanded programming for the Office of Pitt Serves and also benefit The Pitt News, Pitt’s daily student newspaper.

Terry Lucas, general manager of The Pitt News, said in an email the newspaper will receive $69,000, or 2% of the student activity fee and was grateful for the University support.

“The student leaders at TPN are grateful for the additional funding to help offset the decline in advertising revenue which has been happening to all newspapers both commercial and student, across the country,” Lucas said.

Gallagher added after the meeting that a report from Pitt’s Socially Responsible Investment Committee will be released next week. The committee was formed in 2017 to research socially responsible ways to invest the University’s endowment.