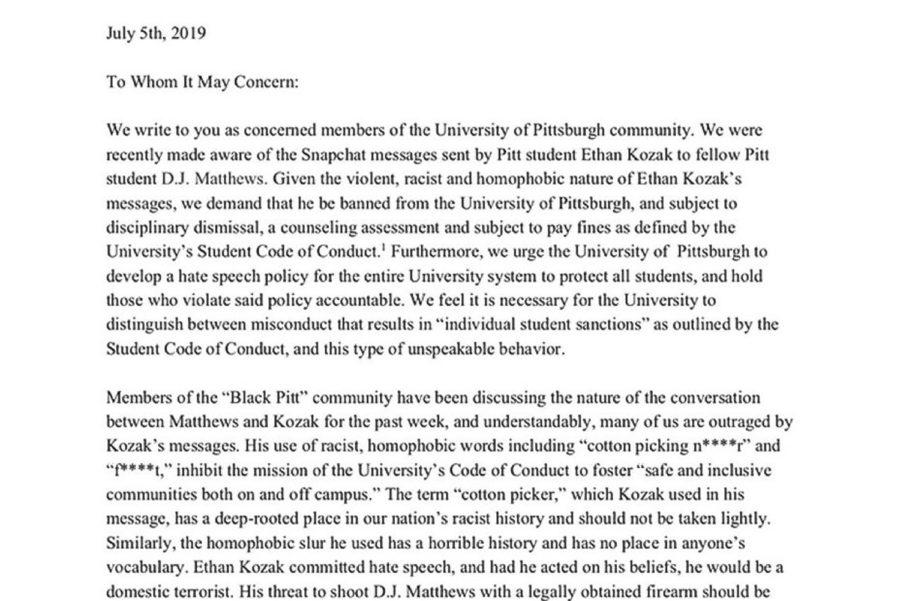 The Pitt student leaders’ letter to administrators calling for the expulsion of Ethan Kozak.

By Janine Faust and Jon Moss

Student leaders and top Pitt officials will meet in the fall to discuss ways to strengthen the Student Code of Conduct, while staying consistent with the First Amendment, both parties confirmed.

The meeting, first announced in a Thursday statement from Pitt seniors Jordan Fields, Edenis Augustin and Jenea Lyles, comes in the wake of campus outrage after Ethan Kozak, a rising junior political science major, admitted to sending racist and threatening Snapchat messages to a black 20-year-old Pittsburgh resident. D.J Matthews posted the messages he received from Kozak on Twitter on June 26, which include threats to shoot Matthews and uses derogatory language such as the “n-word” repeatedly.

Fields, Augustin and Lyles were the authors of a July 5 letter to top Pitt officials calling for Kozak’s expulsion, which garnered the signatures of 27 student leaders, including SGB President Zechariah Brown and the presidents and vice presidents of both the Black Action Society and the Rainbow Alliance, among others. According to Brown, the student letter was sent to Chancellor Patrick Gallagher, Provost Ann Cudd, Dean Bonner and Senior Vice Chancellor for Engagement Kathy Humphrey.

The student letter asserted the Student Code of Conduct does not properly address students who “incite violence” against other students on the basis of race, ethnicity, gender, national origin, sexual orientation, or certain other classifications — none of the conduct’s 40 violations specifically mention these classifications. To remedy this, the student letter called for the University to develop a “strict policy” for these types of situations.

Cudd and Bonner said in a July 6 response they were thankful for students writing to them and appreciate the calls to “continue creating a respectful, peaceful, diverse and safe learning environment,” and vowed to strengthen the Student Code of Conduct within the bounds of the First Amendment.

“In the coming year, we remain committed to doing just that — strengthening our Student Code of Conduct and seeking out new opportunities to discuss the destructive power of white supremacy, racism, sexism, gender discrimination, homophobia, transphobia and other forms of hateful language,” the student letter said.

Cudd and Bonner also said while the University was cooperating with local law enforcement agencies, Pitt needed to tread carefully about releasing details about any possible disciplinary proceedings involving Kozak, due to the federal Family Educational Rights and Privacy Act. The act prohibits schools, in most cases, from disclosing information from a student’s educational record without consent from the student.

“Our ultimate concern is that Pitt students are unfamiliar with the steps in the University’s disciplinary process, as well as the possible sanctions for behavior such as Ethan’s,” the statement said. “We asked that if future incidents like this were to occur, that the University announces and details the general procedures that take place during an investigation rather than giving specific details about the incident.”

Pitt spokesperson Joe Miksch said the University was looking forward to “raising awareness in our community about how our campus judicial review process works, per the code.”

The student statement also thanked students for their support, and encouraged them to speak out against any possible injustices they experience.

“We hope that this incident will encourage you all to use your voice and advocate for your peers so they know that they never have to fight injustice and inequality alone,” the statement said.