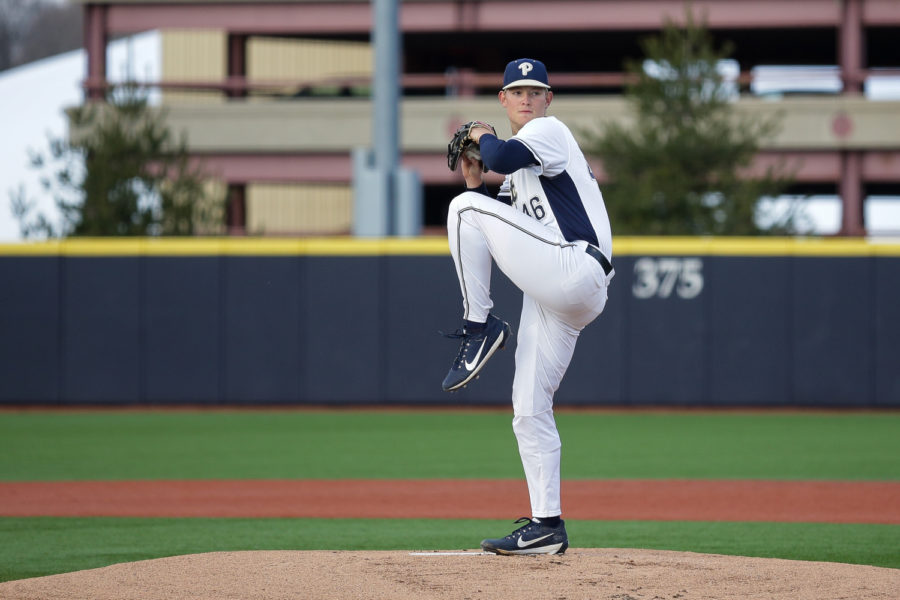 RHP Derek West was the only Pitt baseball player to forgo signing an MLB contract and return to college after the 2018 MLB Draft.

With the heat of summer in full force, the only sport in season is America’s pastime: baseball. Although the Pittsburgh Panthers baseball team is in their offseason, a handful of past Panthers are working their way through the minor league system, including the five players that were selected in the 2018 MLB Draft.

The earliest of the Panthers taken in the 2018 draft, relief pitcher R.J. Freure was scooped up by the Houston Astros in the sixth round. After signing, Freure was assigned to the Astros Low-A affiliate in Troy, New York, as a member of the Tri-City ValleyCats, foregoing the Astros’ Rookie League team, a rare feat for a new draftee.

The Astros’ decision to have Freure skip Rookie ball paid off, as the right-hander pitched to a 0.98 ERA in 11 games, striking out 29 batters over 27.2 innings pitched. This season, Freure was promoted to the Middle-A level, becoming a member of the Quad Cities River Bandits in Davenport, Iowa. In 15 games, Freure has a 3.69 ERA with 87 in 63.1 innings pitched.

Of those 15 games, 11 of them have come as a starting pitcher, something Freure did only once in his 48 games played for the Panthers. Having just turned 22, Freure is on a good track to reach the major leagues within the next couple of years.

Two rounds after Freure was drafted last June, the Cincinnati Reds took relief pitcher Matt Pidich with their eighth-round pick. After enjoying a solid final season with the Panthers, Pidich struggled with the Billings Mustangs, the Reds’ Rookie League team. In 18 games out of the bullpen and one game as a starter, Pidich registered a 6.46 ERA in 30.2 innings pitched.

This season, things took a turn for the better for the Panthers’ former ace. Pidich was promoted to the Dayton Dragons, the Reds Middle-A affiliate. In his 25 games out of the bullpen, Pidich has a 2.32 ERA while striking out 47 batters over 42.2 innings.

At 24-years-old, Pidich is rather old for a player at his level, but his success following his conversion from a starting pitcher to a relief pitcher may benefit him in accelerating his track to the big leagues.

In his last season at Pitt, West thrived as the ace of the staff, striking out 82 batters in 68.1 innings to go along with a 3.82 ERA. Joining Freure in the Houston Astros organization, West also was sent straight to Low-A to join the Tri-City ValleyCats, skipping the Rookie League.

This summer, West has a 4.91 ERA in four games out of the bullpen for the Valley Cats, striking out four batters in 7.1 innings pitched. At some point, West will look to reunite with Freure down the line.

Transferring from Vanderbilt prior to the 2018 season, Liam Sabino was able to improve his draft stock with the Panthers, resulting in the St. Louis Cardinals taking him in the 35th round.

After signing, Sabino played in two Rookie League teams last summer, appearing in 23 games for the Gulf Coast League Cardinals and 19 games for the Johnson City Cardinals. In those 42 games, Sabino managed to hit .259 with 13 doubles and 21 runs batted in.

Unlike the aforementioned Panther draftees, Sabino returned to the Rookie League this year, remaining with the Johnson City Cardinals. In 20 games, Sabino has hit .269 with a .402 on-base percentage. Additionally, he’s hit four doubles and three home runs to go along with 14 runs batted in.

The final Panther to get selected in the 2018 draft, Yaya Chentouf was taken in the 36th round by the Detroit Tigers. Like Pidich and Sabino, Chentouf was assigned to the Tigers’ Rookie League affiliate after signing last summer. However, after pitching just one game, striking out seven batters over 3.1 innings with the Gulf Coast League Tigers West, Chentouf was promoted to the Connecticut Tigers, the Tigers’ Low-A affiliate.

In 23 games for Connecticut, Chentouf pitched 23 games out of the bullpen, logging 23.1 innings pitched with 22 strikeouts and a 2.23 ERA. As a result, Chentouf was promoted to the West Michigan Whitecaps, the Tigers’ Middle-A affiliate prior to this summer.

Chentouf has not found quite the same success as last summer, as he currently has a 4.44 ERA in 31 appearances out of the bullpen. He has tallied an impressive 52.2 innings pitched though, striking out 37 along the way.