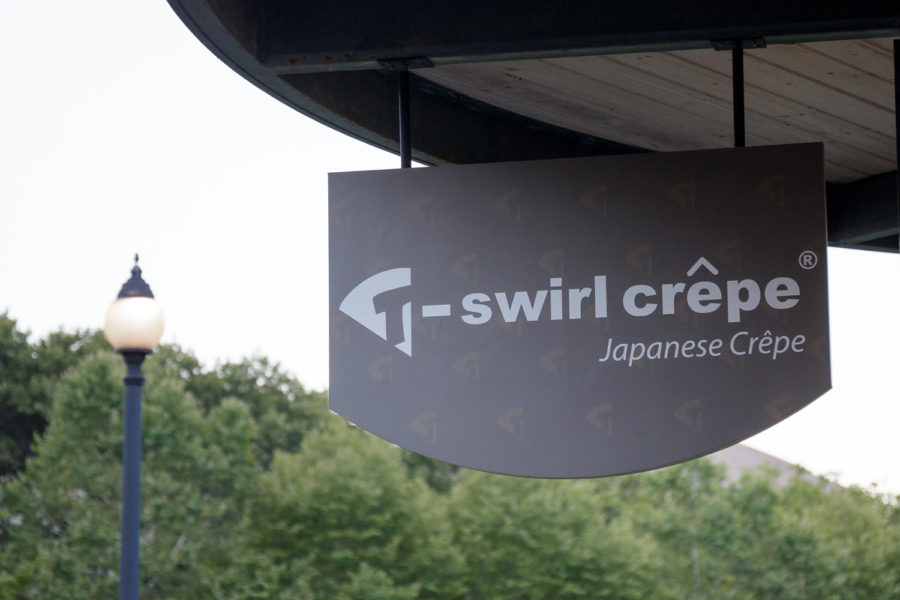 When someone mentions crepes, they often think of the soft and sweet French crepe, filled with cream and strawberries, topped off with powdered sugar.

But with the June 27 opening of T-Swirl in Schenley Plaza, Oakland residents can try the Japanese crepe: a crispy and chewy crepe, folded neatly into a hand-held cone and decorated with either sweet items — strawberries, chocolate truffles or bananas — or savory items — such as crab meat or salmon.

Owner Tom Chen said the crepes look “beautiful” when you wrap them up.

“We have a lot of customers who, when they see it, don’t even want to eat it!” Chen said, chuckling.

From the 12 different sweet crepes, including matcha chocolate truffles and lychee romantic, to the two different savory crepes, spicy crabmeat and smoked salmon, the carry-to-go Japanese crepes appeal to a wide range of customers.

Before opening Pittsburgh’s two T-Swirl locations, Chen worked from 2010 to 2017 at Schenley Plaza’s Asia Tea House, which is owned by his father. While on vacation in Queens in New York City, Chen was introduced to Japanese crepes. Smitten by the crispy handheld dessert, he decided to contact T-Swirl’s corporate office, and he opened a location in Pittsburgh’s Squirrel Hill neighborhood in December 2017.

Encouraged by the success of T-Swirl in Squirrel Hill, Chen started to draw plans to open a second Pittsburgh location. He said Schenley Plaza management called to offer him space previously occupied by Waffallonia, a local dessert chain.

“It’s the location, and also it’s close to the student,” Chen said. “That’s good advertising for us too, so that people will know us.”

Chen said that he expects business to be busier once students arrive on campus for the fall semester.

The location on campus, the novelty of Japanese crepes and the variety of crepes offered on T-Swirl’s menu are some of the reasons that some customers decide to buy a crepe from T-Swirl.

One person that was drawn to T-Swirl is Joshua McDermott, a Pitt graduate student studying sociology. McDermott said he was walking by Schenley Plaza on a sunny Tuesday afternoon after teaching in Posvar Hall when the T-Swirl sign caught his eye.

“The waffle thing was too simple,” McDermott said. “This is more interesting. There’s more stuff.”

But the crepes appeal in particular to gluten-free consumers — the crepes are made with rice flour instead of regular flour, giving them their crispy taste.

Rachel Rudnicki, a Pitt senior psychology major, said she was relaxing in Schenley Plaza with friends when she decided to try a T-Swirl crepe.

“What caught my eye was ‘Gluten Free’, so then I was like ‘Oh, gluten free! Let me check it out, because it’s something I can actually eat,” Rudnicki, who has celiac disease, said. “And then I looked at the menu and it looked really appealing.”

Chen said gluten-free foods are more common now and one of the reasons he, as well as customers, are drawn to the Japanese crepe. But while the crepe itself is gluten-free, some of the toppings, including the custard, are not. Chen mentioned that he is currently working with the supplier on making the custard completely gluten-free.

Opening a storefront in Schenley Plaza also means staying close to family. Chen and his father Feng said they help each other when it comes to maintaining their respective food shops in the plaza.

“He helps me with the ordering for the store, because I don’t know English at all,” the elder Chen, a Chinese speaker, said in an email translated by his son. “I help him to give him the knowledge to start the new business.”

The father and son duo are just two of the steadily growing Asian businesses in Pittsburgh. According to CBS Pittsburgh, the City’s Asian population increased by 28% between 2013 and 2017. Largely driven by an influx of foreign students and immigrants choosing to go to school or work in Pittsburgh, more Asian businesses are opening to meet the demand.

Kung Fu Tea, a national chain of bubble tea stores, was one of the businesses to recognize this growing trend and opened an Oakland food truck in May. Kevin Chu, the truck’s manager, said the growing Asian population was one of their target demographics in Oakland.

“There’s not enough Asian culture in Oakland, there could be a little bit more,” Chu said. “So, every little bit counts.”

With the addition of the new T-Swirl location in Schenley Plaza and the new Kung Fu Tea truck, Oakland is slowly expanding its Asian-style eateries to accommodate the growing Asian population in Pittsburgh. When asked about whether or not he would open a third T-Swirl location, Chen said he was considering another location within the next year or so.