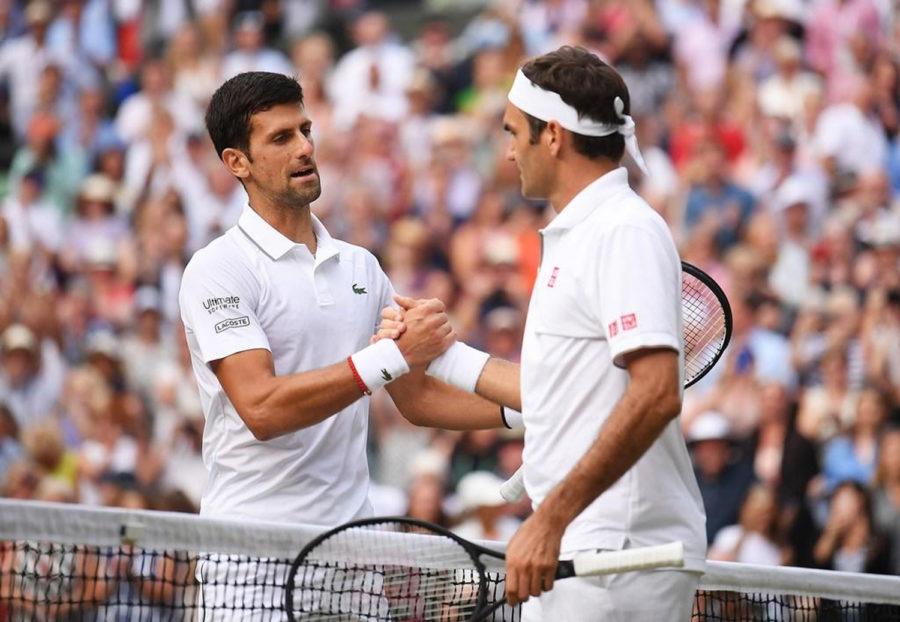 Novak Djokovic and Roger Federer congratulate each other after their historic singles championship match at Wimbledon on Sunday. Djokovic prevailed, 7-6, 1-6, 7-6, 4-6, 13-12, to win his fifth championship.

Every time 16-time grand slam champion Novak Djokovic sets foot on Centre Court at Wimbledon, he pictures a grueling match in vivid detail — one where he’ll emerge the victor.

“I always try to imagine myself as the winner,” Djokovic said.

But neither he nor any screenwriter in Hollywood could’ve envisioned a more epic Wimbledon final than the one on Sunday afternoon, when Djokovic pulled off one of the greatest comebacks in tennis history.

“It could have easily gone [Federer’s] way,” Djokovic said after foiling Federer and his Centre Court entourage.

It certainly could have, and in the eyes of Federer’s legion of fans, it should have. Triumphing at Wimbledon as a 37-year-old after defeating his two greatest career rivals, Djokovic and Rafael Nadal, in the finals and semifinals, would have been Federer’s greatest accomplishment to date — and he came agonizingly close to lifting the trophy for a record-extending ninth time. In fact, turn on the TV and blur out the score box, and it would look like Federer was running roughshod over his opponent. He played the better match in just about every way. Looking at the stats, Djokovic’s win seems implausible.

Federer, who is, at this point, the near-undisputed greatest tennis player of all time, won more points in the final (218-204). He outclassed Djokovic on serve in every department: more aces (25-10), fewer double faults (6-9) and a higher win percentage on both his first serve (79%-74%) and his second serve (51%-47%). And even though Djokovic is the best returner of all-time, Federer won more receiving points (79-64) and broke serve four more times.

Numbers like these, for any player, typically indicate a straightforward, three or four set victory — Federer dispatched with Nadal in a four set semi-final, having won only nine more points. So what went wrong for the 20-time slam champ in the final?

“One shot, I guess,” Federer said, referencing the match points. “Don’t know which one to pick.”

Tennis matches like these are considered marathons, but unlike actual marathons, not every mile — in this case, not every point — is created equal.

Djokovic, who often wins even when he’s losing, failed to match Federer’s vigor throughout most of the final, but came up with the goods when he really needed it. Down 3-5 in the first set tiebreak, he reeled off four straight points to seal the opener. After his game deserted him in the second set, losing it 6-1, he roared back to clinch the third set in another tiebreak.

Djokovic needed nerves of steel just to stay in the match, much less win it. Still, he benefited from his opponent’s nervy play during crucial moments. Federer hit an uncharacteristic number of unforced errors during the tiebreaks, sailing several groundstrokes long and dumping a couple easy volleys into the net. In the fifth set, his nerves manifested in safer shots — forehands with diminished pace, volleys popped up — that Djokovic took easy advantage of.

Two match points down, Djokovic pushed Federer’s second serve down the middle, drawing a forehand error. One saved. On the second, he calmly flicked a passing shot cross court when Federer rushed to net off a mediocre approach. On break point that same game, Federer flipped a forehand to the middle of the court. Djokovic hit back aggressively for a winner, and, just like that, the final set was back on serve.

Federer was no doubt the better player in the fifth set — he won more points and created more break chances, just like in the rest of the match — but he failed to capitalize on his numerous opportunities.

“I thought most of the match I was on the back foot,” Djokovic said. “I was defending. He was dictating the play. I just tried to fight and find a way when it mattered the most, which is what happened.”

A few important points, it turns out, decide a lot of tennis matches. It’s a game of inches, as the cliche goes. A slightly crisper shot from Federer on match point or a slightly weaker one from Djokovic could have drastically changed the outcome of the match. Tennis players can’t afford to get nervous or sulk after missed opportunities. Even 30 second mental lapses, especially in tight contests, can cost a player the match.

While Federer has undoubtedly capitalized on many opportunities throughout his career, he has a worrying pattern of failing to close out tight matches. Djokovic has escaped defeat on two other occasions in epic fashion — saving two match points against Federer at the U.S. Open in 2010 and 2011. In the 2008 Wimbledon final, widely known throughout the tennis world as the greatest match ever played, Federer failed to convert numerous break point opportunities against Nadal in the fifth set, handing his great rival the victory.

Federer, surely, has long forgotten these slip-ups, even though they’ve cost him grand slams. But they could weigh heavily in the final margin of the Big Three — Federer, Nadal and Djokovic — who are currently embroiled in a three-way race for the greatest player of all time distinction. Djokovic, who just notched his 16th slam, now stands within four of Federer’s all-time record, and Nadal sits even closer at 18. A victory on Sunday would’ve put Federer six ahead of Djokovic and three ahead of Nadal — certainly not a trivial difference.

But if Federer has proven anything this fortnight, it’s that he can still duke it out with the best players in the world, even at the ripe old age of 37. Federer may have a few more wrinkles and a bit less hair than he did 10 years ago, but his game is every bit as lethal. And as the tennis tour gears up for the U.S. Open next month, his opponents need to watch out.