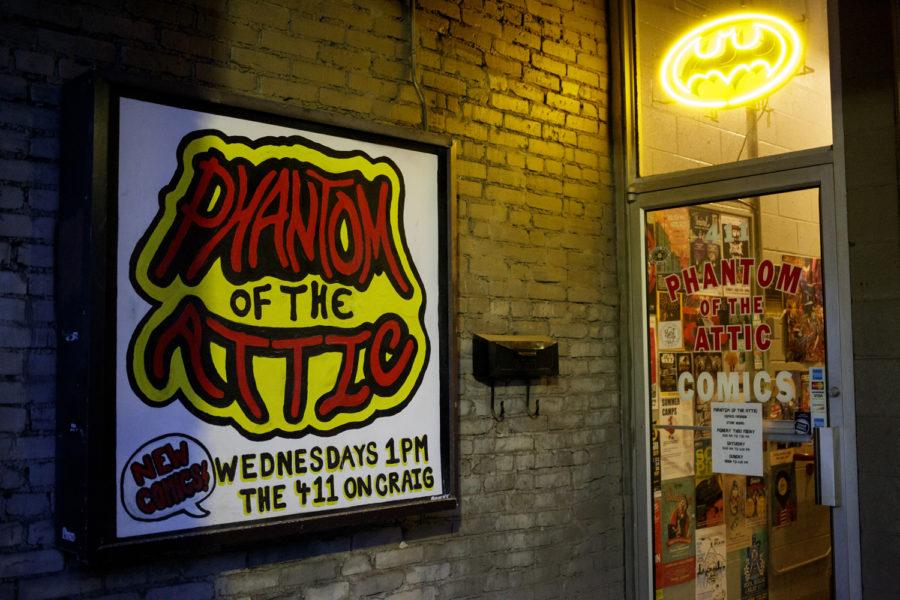 Phantom of the Attic Comics on South Craig Street.

By Isabella Colaianni, For The Pitt News

As one of the major cities in the country with over 300,000 who call it home, Pittsburgh’s fandom culture is incredibly diverse.

Once just a place where comics could be sold and dealt, comic con events have become an explosion of pop culture where people can come together to celebrate comics, films, science fiction, superheroes and every other fandom universe imaginable. Pittsburgh is one city at the forefront, and a variety of cons are held in the City every year.

This summer, two of the comic cons Pittsburgh is hosting are Steel City Con and Wizard World. Steel City Con is Pittsburgh’s annual comic con, held at the Monroeville Convention Center. This year, it will run from August 9 to 11, with celebrities such as George Takei and Paul Reubens in attendance for Q&A panels and photo ops. Tickets for the event run from $23 for a Friday one-day pass to $230 for a VIP package, which gives attendees an opportunity to meet one of the celebrities and admission to the exclusive 30th anniversary party.

Another con taking place in Pittsburgh this summer is Wizard World, which will be held July 26 to 28 at the David L. Lawrence Convention Center. This con operates in 14 cities across the country and has previously been in Pittsburgh in 2015 and 2016, but this year it’s making a comeback with about 100 vendor tables and celebrity guests Zachary Levi (“Shazam!”), Jewel Staite (“Firefly”), Lesley-Ann Brandt (“Gotham”) and many others. Tickets for this event start at only $15 for general admission and can reach $259+ for VIP packages.

Jerry Milani, the public relations manager for Wizard World, said that the variety of dimensions of pop culture present at the con serves as an opportunity for fans to learn about things they might not even know they enjoy.

“We try to bring all of pop culture together in one place so fans can be immersed in it,” Milani said in an email. “You might be attending the show to meet Zachary Levi because you love “Shazam!.” But on the way, you might run into someone cosplaying as Shazam, or an artist with a unique interpretation on the character, or an exhibitor with a “Shazam!” item you’ve never seen, and finally you get to meet Zachary [Levi] to cap the experience.”

One of those who will be in attendance at Wizard World is Wayne Wise, a comic enthusiast and adjunct professor at Chatham University. At the event, Wise will be doing a comics academia panel presenting some teachings from his course, comics and popular culture. Wise has been a regular at comic cons for several years as a teaching panelist, fan, artist and even vendor for the comic book store he’s worked at for the past 22 years, Phantom of the Attic Comics.

With a convenient location for a comic book store, most of the business the store receives is from sporadic college-aged customers and older middle-aged regulars with more of an income. However, Wise elaborated on how certain franchises, such as direct graphic novel adaptations like “The Walking Dead,” drive sales, while others, like Marvel, do not.

“The movies don’t drive sales the way most people think they do. The Marvel movies — millions of people go see them, but millions of people don’t walk in here to buy comics,” Wise said. “Part of that is that you get introduced to these characters in the movies and it’s a very different world and continuity than what you read in the books. Things that did drive sales — “Watchmen.” When the “Watchmen” movie came out — that’s a graphic novel — you see the movie and here’s a book you can buy.”

While Phantom of the Attic Comics may be the go-to for comic-based fandoms, other fandom cultures in the Oakland neighborhood can be found right at the University of Pittsburgh with organizations like Pokemon Go Oakland, the Fantasy Studies Fellowship and Project Potter. Project Potter is a club that operates during the school year and brings together individuals who love community service as much as they love the “Harry Potter” series.

Quincey Johnston, the secretary on the executive board for Project Potter, said after the “sorting hat ceremony” in the beginning of the school year, meetings are held bi-weekly — one day dedicated to a service activity, such as a fundraising table, and one day the following week spent doing a social activity like playing trivia or doing brain teasers. The fundraising money collected by Project Potter has gone to Our Clubhouse in the past. The group will also be working with the Homeless Children’s Education Fund this year.

“Harry Potter” fans and comic book buffs alike have found Pittsburgh to be a place where they can celebrate the things they enjoy the most, which is why Milani feels that it’s a great city for events like comic cons and other organizations that appreciate pop culture.

“Pittsburgh has a vibrant pop culture scene,” Milani said. “That other great events can be held in the region and all offer fans something they love is fantastic.”