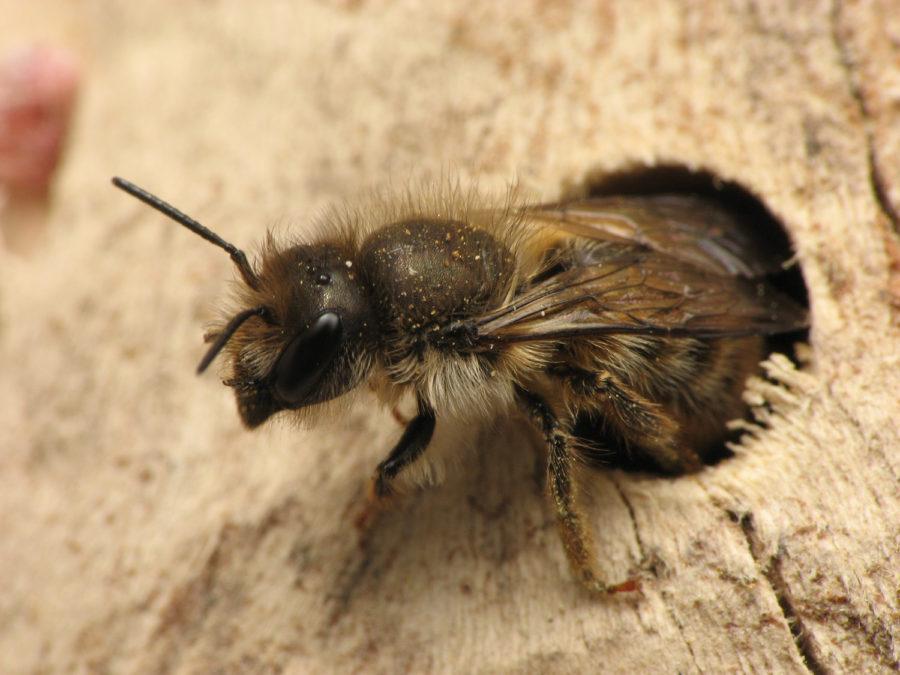 Returning Oakland residents might notice some new tall structures around their neighborhood, shaped like birdhouses and filled with thin, rolled up cardboard.

These aren’t birdhouses ― they’re bee houses, built by five Pitt students in June with the Bee Friendly Pitt project, which provide safe places for bees to nurse their young and raise awareness about solitary bees. The seven bee houses are located in green spaces around Oakland, including the Marlie Gardens and the Posvar Hall Pollinator Garden.

Matthew Golub, a junior environmental studies major and member of the project, said the idea to build bee houses around Oakland started when he took a sustainability course taught by Ward Allebach, an adjunct environmental studies professor, this past spring. The premise of the course is for students to create a project that aligns with the University’s Sustainability Plan, released in 2018.

Golub and Sarah Hart, a senior environmental studies major and fellow group member, were both interested in bees ― Golub has harbored an interest in insects since seventh grade, and Hart’s mother works with beehives and is a member of the Philadelphia Beekeepers Guild.

They and their peers discovered that solitary bees, which are native to the Pittsburgh area, were prime subjects for their project since they are more efficient at pollinating than honey bees, which are from Europe. Furthermore, they can pollinate a wide range of plants, creating a stronger ecosystem in urban areas.

“It helps with air quality, habitats for other animals, preventing erosion with some of the trees and stuff like that,” Golub said.

Solitary bees, which are about the size of a fingernail, make up about 90% of the different species of bees in Pennsylvania. Female solitary bees like to nest in tiny holes they build in the bare ground. Unlike honey bees ― which have a social grouping with a queen, worker and drone bees ― solitary bees don’t like to interact with other bees, even if they live near them.

“I like to think of it as a neighborhood,” Golub said. “You’re not in your neighbor’s house all the time, but you live in the same area.”

These bees prefer unkempt gardens to live in, but those are hard to find in urban environments like Oakland. Richard Heller, Pitt’s senior manager of electrical utilities and energy initiatives, said that’s partly explained by the appearance of unkempt gardens.

“Nobody [in an urban setting] is going to tolerate ‘unsightliness,’” Heller said. “So those untidy stems and dead wood and unmulched, unmowed grounds that bees need to raise their young in ― we need to find an aesthetically pleasing way to do that.”

The solution to that are the bee houses, made of untreated plywood with roofing, with cardboard tubes and bamboo on the interior for the female solitary bees to lay their eggs and raise their young. The houses are mounted on 8-foot-tall wood posts to avoid dampness and predators.

But the bee houses have a longer history on campus than when the Bee Friendly Pitt group took up the project.

According to Allebach and Heller, the project traces its roots back to 2016 and 2017, when pollinator gardens were first proposed and installed in Oakland by students like Anna Greenberg, co-founder of Thriftsburgh. Over the past few years, different student groups, like Burgh and the Bees, have followed in each other’s footsteps to move the project forward.

Past attempts at installing bee houses weren’t realized due to time constraints, but provided foundational stepping stones for future related projects ― such as getting permission to set up houses or demonstrating the safety of solitary bees, which don’t sting unless handled roughly.

“There have been a lot of projects like that,” Allebach said. “From one project grows another.”

In addition to habitat loss due to urbanization, other factors impact bees in urban settings. Nevin Cullen, a graduate student studying pollen transfer dynamics in the Ashman lab, said black asphalt and concrete replace flowers and bare ground and increase urban temperatures. According to the National Center for Biotechnology Information, solitary bees, which have a lower thermal tolerance than social bees, might be at greater risk towards these warming temperatures.

“Right now, urbanized areas are a pretty harsh landscape for insects,” Cullen said. “And it breaks up the landscape around surrounding urban areas.”

Cullen said it’s important to not only use sustainable resources, but also to provide friendly environments — such as the bee houses — for insects, plants and other wildlife to establish habitat connectivity.

Golub and Hart are currently writing a manual for Pitt’s Students For Sustainability club on how to easily make and maintain the bee houses. They also intend to establish signage to educate curious pedestrians and hopefully erase stigma towards bees.

Editor’s Note: Sarah Cutshall, the visuals editor at The Pitt News, is a member of the Bee Friendly Pitt project.