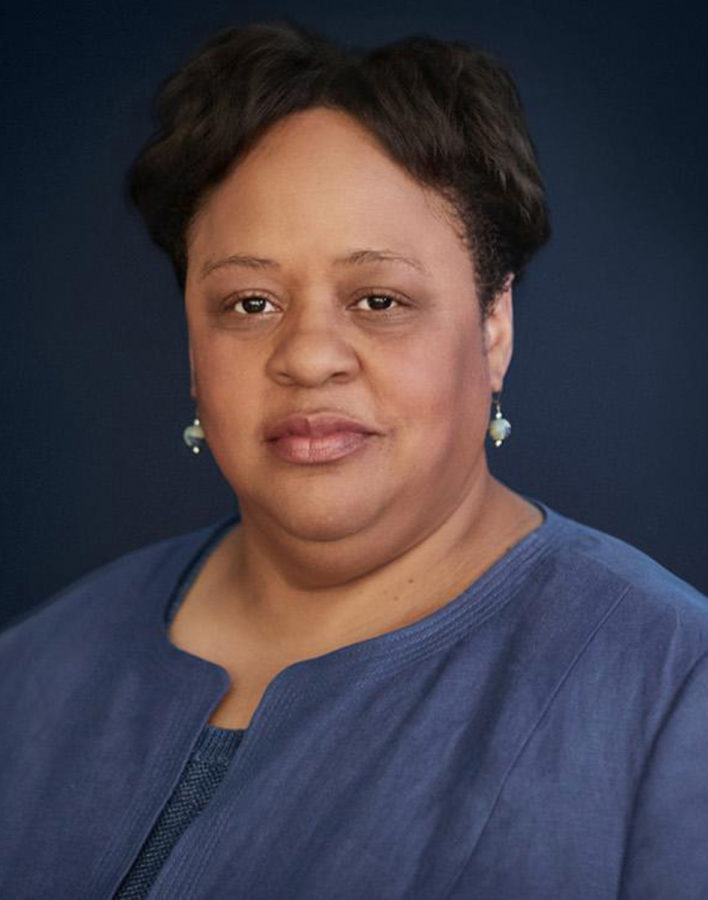 After serving for six years as the associate dean at Pitt’s College of Business Administration, Audrey Murrell is moving on — to the University Honors College.

Murrell recently relocated from Sennott Square to the 36th floor of the Cathedral of Learning, home of the UHC. She was appointed acting dean of the Honors College on June 17 for the next two years, tasked with rolling out a new admissions-based honors program and expanding the UHC’s global research programs while doubling down on the UHC’s successes in fellowships, the Bachelor of Philosophy degree and national scholarships.

She is the first African American and woman to hold the UHC dean title. Her appointment follows the June 1 departure of the previous UHC dean, Brian Primack, who is now the dean of the College of Education and Health Professions at the University of Arkansas.

Looking back on her time at CBA, Murrell said she was proud of the work she had done to expand certificate and accelerated degree programs. She also highlighted the number of business students who have been able to study abroad while at Pitt, referencing CBA’s tagline, “from the classroom, to the city, to the world.”

“We had 48% of the business students who, by the time I left, had some international experience. Twenty-five percent had done international internships, the national average is 1%,” Murrell said. “We provided significant scholarship funding to make sure that people who needed gap funding to be able to do study abroad had it, so 100% of students who qualified received some funding from us.”

Murrell said she was approached in the spring by Provost Ann Cudd about taking over the UHC. The two talked about the future of the Honors College and how Murrell could contribute to that vision.

“I think we really got on the same page about what we could do to support honors students at Pitt,” Murrell said. “Since the Honors College is just such an extraordinary unit within the University, it was hard to say no.”

The Honors College is rolling out a new admissions-based program this fall, in which students will receive a “with honors” credential, in addition to their regular diploma, upon completing the program and graduating. The application process for the program — which includes 24 credits and a number of hands-on elements like internships or study-abroad trips — is similar to that of honors housing from previous years, with an academics component and two essay questions.

The program was created, in part, due to prospective students asking Pitt administrators why the University didn’t have an admissions-based honors program, like those at other universities. With the new program, Murrell said, Pitt will be more competitive with other universities and the UHC will now be able to be ranked against them.

“If you want an enhanced experience — where there is a clear pathway and a destination to graduate from the University of Pittsburgh with a degree with honors distinction — we now have a program, a deliberate and intentional program for students who want that, because other schools that they’re looking at have that, and Pitt doesn’t,” Murrell said. “It honestly makes us more competitive, not more exclusive.”

Murrell added that all existing UHC opportunities remain open to all Pitt students, regardless of whether or not they are part of the new program.

“I would see them not as a hierarchy, but as a menu of options, and the value is based on what is the best fit for what you want as your destination,” Murrell said.

According to Murrell, about 300 first-years are participating in the first run of the program, resulting in the Honors Housing Learning-Living Community moving from the west to the east wing of Sutherland Hall this year due to fewer students being involved. About 400 students lived in Honors Housing last year.

“Moving forward, we’ll start to gradually increase the number of students that are getting accommodated in the new model, but since it’s a new model, we set the target to be reasonable,” Murrell said. “We wanted to make sure we executed well during this first year.”

In addition to the new honors program, Murrell said she is also focused on bringing new life to the UHC’s global research program, which was popular in past years.

“The staff and I are working to bring that back, so that the research opportunities — which honors students have really taken advantage of locally — can be extended globally,” Murrell said.

She added that the UHC will be conducting more outreach activities with the Pitt community, both through service and research.

Murrell mentioned her own interest in sustainable food systems as an example of work that impacts local communities and features interdisciplinary conversations.

When asked whether she was staying on as Honors College dean past her two-year appointment, Murrell said that it was not her call, and she was focused on the upcoming academic year.

“I don’t want to look too far down the road,” Murrell said. “I want to make sure I keep all of us focused so that we deliver an impactful experience for this group of students who are joining the Pitt campus in the fall.”

As the Honors College prepares to enter its 32nd year, Murrell said it can still be a challenge to educate Pitt community members about all of the different opportunities available at the UHC, besides the more well-known programs.

“I think part of it is that they were already there, but there wasn’t the level of awareness,” Murrell said. “We’re going to do better at telling that story so that students know that if you want to do research, if you have a project in mind, if you want to look at things from an interdisciplinary perspective — that those are welcome, and they’re valued, and they’ll be supported in the University Honors College.”

What exactly “honors” means has changed over the UHC’s history — its founding dean G. Alec “Doc” Stewart emphasized intellectual curiosity and creating a place where students could pursue high academic attainment for its own sake. After Stewart’s unexpected death in 2010, neuroscience professor Edward Stricker was appointed as the new dean and began to move away from that philosophy to one of academic accomplishments — drawing the ire of students.

Murrell said that under her watch, all disciplines, majors and perspectives will be welcomed and valued at the Honors College.

“We have a whole portfolio of ways for students to imagine themselves as part of the UHC, at a course level, at a project level, at a global experience level,” Murrell said. “The other thing that we say in the Honors College is that, ‘we cross boundaries,’ be they disciplinary boundaries, or geographic boundaries or thought boundaries. And if we don’t have it, and it’s a good idea, we’ll help you create it.”