Nicole Mitchell: an inside look at the new director of Jazz Studies 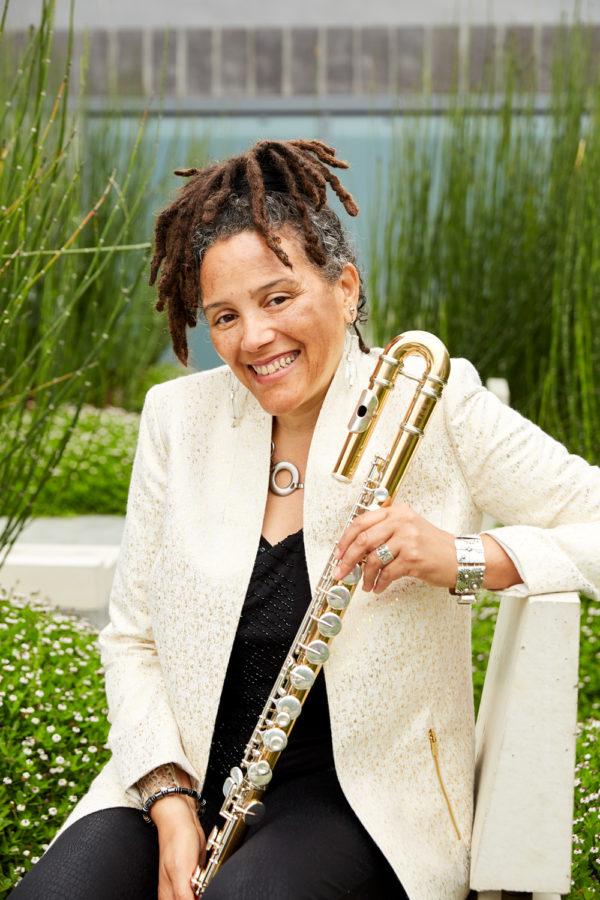 Nicole Mitchell, an internationally acclaimed jazz flutist, composer and educator, was named to the director of Pitt’s Jazz Studies in January.

When Geri Allen passed away in 2017, members of Pitt’s music department not only mourned their friend and fellow faculty member, but were also faced with an enormous task — finding a new director of the Jazz Studies program.

After considering numerous applicants on an international scale for more than a year, the University finally found the new director it’s been looking for.

Nicole Mitchell, an internationally acclaimed jazz flutist, composer and educator, was named the University of Pittsburgh’s William S. Dietrich II Endowed Chair in Jazz Studies in January. She officially took over the role on July 1, becoming the third director in the program’s 49-year history. An award-winning musician in her field and a university professor for more than 18 years, Mitchell will also teach as a professor in the music department.

Deane L. Root, a current professor in the music department at Pitt and the former chair of the department, assisted in the search for a new director of the Jazz Studies program. As a key figure in choosing who would take over the program, Root said no other candidates came as highly endorsed by their peers than Nicole Mitchell.

“I talked to some leading people in the field of jazz and they all said one name — Nicole Mitchell Gantt. We did an international search, but, in the end, she really was the one who stood out as the most creative — the one who helps to build strong programs and communities and brings people together,” Root said. “She’s a real builder and community-maker, an amazing internationally recognized musician, composer and leader of ensemble. She’s the complete package.”

Mitchell shares Root’s excitement and said she couldn’t be happier to be at the University of Pittsburgh. After living in multiple cities and doing various kinds of work, she feels that Pittsburgh is the perfect place for her to flourish and not have to sacrifice anything she wants to do academically, musically or with the community.

Before starting at the University of Pittsburgh, Mitchell served as a faculty member at the University of California, Irvine, where she worked primarily in the music department’s PhD Program in Integrated Composition, Improvisation and Technology, advising PhD students and teaching courses in music composition and improvisation. She was also the vice co-chair of the university’s Council on Climate, Culture and Inclusion, in which she worked to create connections across various groups in the campus community and different initiates to support the inclusion of underrepresented groups at the university.

She cites learning to handle the hardships she experienced growing up as the reason why she knows how to be a good educator. From experiencing violence and ridicule as one of the few African American children living in her Californian neighborhood after the civil rights movement, to graduating college as a single mother, Mitchell finds these experiences have made her a more compassionate and understanding person.

“I was an untraditional student, so I can understand the types of hardships in life that may make it difficult for a student to navigate the university setting. I finished college as a single mother, having just gotten off of public aid. As an educator, I believe my goal is to facilitate, not force learning,” Mitchell wrote. “Learning is not information, it’s a skill of being able to think critically and expand one’s consciousness through exposure to new ideas and interaction with others. For music students, I’m happy to facilitate each student’s unique vision of how they can contribute to humanity through their work in music.”

This fall, Mitchell will introduce a new class called Creative Arts Ensemble, which will be offered to both undergraduate and graduate students. The course is open to all creative artists and will teach students about interdisciplinary work through experience and research by collaborating in mediums such as music, poetry, movement, film and/or visual art. In the spring, Mitchell will teach the music department’s History of Jazz class, which is the largest course offered by the music department and is open to non-music majors.

Beyond her abilities as an academic, Mitchell is widely known in her field for her work as a jazz flutist. While the flute may be the instrument she’s internationally known for, it wasn’t the first instrument Mitchell was exposed to.

“I was introduced to the flute in 4th grade. When I first heard it, the sound went right through me in a startling way. But my parents told me ‘No.’ They had already bought me a viola just months before,” Mitchell wrote. “So, I started playing ‘air flute’ with my imagination from then until 8th grade, when I happened to win an art contest. My parents offered to give me art lessons and I said: ‘Can you take that same money for the art lessons and give me a flute?’ I was really into it right away.”

As a professional, her list of awards and honors for her contributions to the jazz field are numerous, and include Top Flutist by Downbeat Magazine’s Jazz Critic’s Poll every year from 2010-2017, Flutist of the Year by the Jazz Journalist Association nine times since 2008 and, more recently, the Champion of New Music Award by the American Composers Forum in 2018.

Mitchell has also founded several music groups during her career, including Sonic Projections, Ice Crystals, Maroon Cloud and Black Earth Ensemble. BEE, which was founded in Chicago more than 20 years ago, is the most well-known of her various groups, having performed at art venues and jazz festivals throughout Europe, Canada and the United States. Currently, the group is in Lisbon, Portugal, performing Mitchell’s Mandorla Awakening project for the Jazz Agosto festival.

“I find her work to be very refreshing, eclectic and also challenging for the listener in the best way, because it makes you think about music and the role of the artist,” Rosenblum said. “She is full of ideas about so many things, including ways that music can build community and address issues of our time, and also ideas for public facing initiatives.”

His colleague, associate professor in the jazz department Michael Heller, said he couldn’t imagine a better director of the Jazz Studies program.

“She’s everything we could have hoped for in a new director: a world renowned performer, celebrated educator, experienced organizer of community music engagement through her work with the [Association for the Advancement of Creative Musicians], and possesses a powerful commitment to linking music and social justice issues,” Heller said. “While we continue to mourn the passing of our previous director Geri Allen, there is no one on the planet who I could be more excited about working with that Nicole Mitchell Gantt. I can’t wait to see where her leadership takes our program in the years to come.”