2023 first years get the big picture during Welcome Week 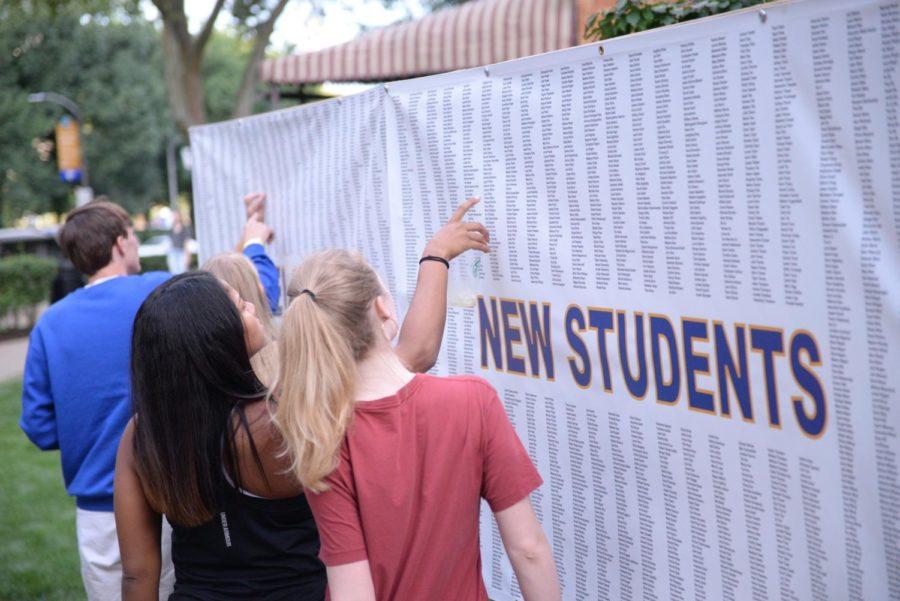 Pitt’s class of 2023 is touted as the University’s most ethnically diverse class ever and consists of 42% out-of-state students.

By Nicole Marzzacco, For The Pitt News

Samantha Solenday and about 4,000 of her classmates stood on the lawn of the Petersen Events Center Wednesday afternoon, carefully arranged so their blue and gold Welcome Week T-shirts formed an image — the snarling Pitt panther logo.

The class photo is one of many traditions Solenday, a first-year planning to major in public and professional writing, experienced for the first time last week. For her, it was a standout.

“I don’t think other schools would be able to create their logo the way Pitt did,” Solenday said, “and it was so cool seeing the finished picture at the end.”

The 4,150 students in the class of 2023 make up Pitt’s most diverse class ever — and the highest-ranked academically. But before classes begin, Pitt keeps first-years busy with a full schedule of events designed to help students settle into life at Pitt. This year’s schedule, organized in part by Pitt’s cohort of upperclassmen First Year Mentors, ranged from a glow-in-the-dark yoga session to an ice cream social.

“As the week went on the events were more fun, since I started making friends now,” Solenday said. “I’m excited to get involved since Pitt offers so much.”

First-year biology major Lydia Meade described convocation, the annual welcome ceremony held at the Pete, as “slightly overwhelming.” Outside, first-years were greeted by students in Greek life and other extracurricular activities trying to recruit new members.

Inside the Pete, things were more formal. First-year students heard an address from student government president Zechariah Brown and listened to Chancellor Patrick Gallagher characterize Pitt’s values and expectations for its students. Afterwards, each member of the class of 2023 received an official University pin and sang the alma mater before heading outside for a barbecue — another chance to talk to new people.

Meade said the convocation ceremony made her feel closer to Pitt.

“I really felt invited into the Pitt community and ready to continue my journey to see what this City offers,” Meade said.

Though convocation was mandatory, many students took advantage of the optional events as well, including the activities fair at the Pete on Sunday.

First-year Rachel McLoughlin said she felt more comfortable at Pitt after seeing the many groups, clubs and societies represented at the activities fair. McLoughlin is a pre-physical therapy bioengineering major, but hopes to explore her other interests, like soccer, through clubs.

“There were so many clubs offered by Pitt that I think it’ll be easy to find your niche,” McLoughlin said. “It gives us the opportunity to meet more upperclassmen and people with other interests outside our major.”

Alyssa Kline, also a first-year pre-physical therapy major and McLoughlin’s roommate, said Welcome Week helped her overcome some of her nerves about coming to Pitt.

“I was nervous about meeting people at first and not sure what to expect,” Kline said. “With all the events it was easy to meet people and make friends, though.”

Welcome Week concluded Sunday night with the 99th annual Lantern Night, the ceremony where Pitt alumnae pass the torch of learning on to the new class of female students. And although classes start Monday, McLoughlin said the events of Welcome Week helped her feel more prepared for the year to begin.

“Having so many events early in the week really helped me meet people,” McLoughlin said. “I like how we had a week to explore the campus, rather than just be thrown in classes on Monday.”