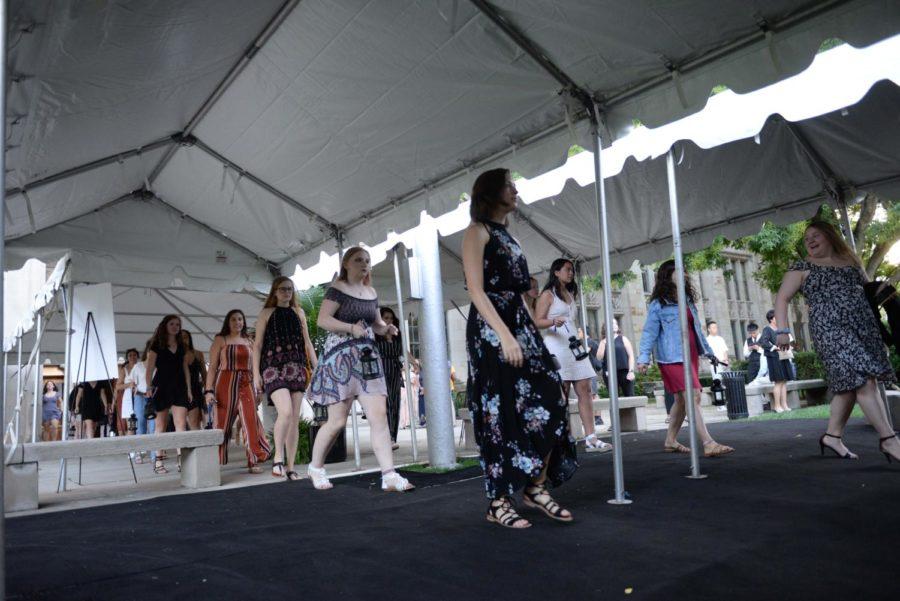 First-year women exit the Cathedral of Learning after receiving their lanterns.

By Benjamin Nigrosh, For The Pitt News

The words of Boyd, a 1972 graduate of the Dietrich School of Arts and Sciences and representative of the Pitt Alumni Association, echoed out over 1,300 first-years on Sunday night. They funelled out of the Cathedral of Learning and into the courtyard of Heinz Chapel for Pitt’s 99th annual Lantern Night. As the University’s oldest tradition, the event was created to welcome the female students of each year’s incoming class, and introduce them to a community of Pitt women.

Lynne Nincke, a 1986 graduate of the Dietrich School of Arts and Sciences, said she was proud to be part of this long-standing tradition.

“For a female alumna to be passing on the flame of learning to an incoming female freshman I think is so powerful and so poignant,” Nincke said.

Nincke was one of 38 alumnae acting as flame bearers for the Lantern Night ceremony. This group of Pitt graduates — all of them mothers and grandmothers of incoming students — lit the lanterns of their daughters and granddaughters, as well as all other students participating in the ceremony.

Maddie Morrow, a first-year biology major, said the event emphasized the importance of creating a community of women to support one another and to commemorate their achievements.

“For a long time, women weren’t allowed in college,” Morrow said. “This is celebrating how far we’ve come.”

Provost Ann Cudd, the last to speak before the lanterns were lit, reminded the audience of the progress made since Lantern Night began — this year’s ceremony marks the 99th anniversary of the ratification of the 19th Amendment, which allowed women to vote in the United States.

“Lantern Night is special as it symbolizes women’s progress through education,” Cudd said. “Lantern Night reminds us that even good and great institutions need to reinvent themselves to ensure justice.”

Cudd also reflected on the generations of hardworking women and students that came before her, highlighting her mother’s experiences.

“My mother was a trailblazer in her family,” Cudd said. “As a first generation student, she achieved a college education through sheer determination to overcome the many obstacles that women faced.”

Following Cudd’s speech, the students were led into the Chapel. Holding metallic lanterns hanging from blue ribbons, the flame bearers lit the students’ lanterns — symbolically passing on the light of their knowledge to the new students with each lantern lit.

Lisa Nazar, a 1993 graduate of the Dietrich School of Arts and Sciences, said taking part in this event was her way of expressing her pride in being a Pitt alumna. She said that she still holds dearly the values and community that she found at Pitt and was excited to pass that on to her daughter and many more generations of students.

“It’s part of the sacred tradition of Pitt. It’s part of being a member of this community, of being proud of who we are and what we stand for,” Nazar said.

During the parade of students moving up and down the aisles of the Chapel to light their lanterns, the flame bearers whispered short snippets of advice and words of encouragement to students, continuing the night’s tradition of encouraging female students.

Once all of the lanterns were lit, Boyd looked out at the crowd and took a short moment of silence for attendees to reflect and appreciate their place in the community. She then called upon the students to stand, raise their newly lit lanterns and join her in repeating a short stanza.

“Hold your light high / I pledge my word / In my own heart / To sing both for myself and for those who follow me in the light of truth,” Boyd said.