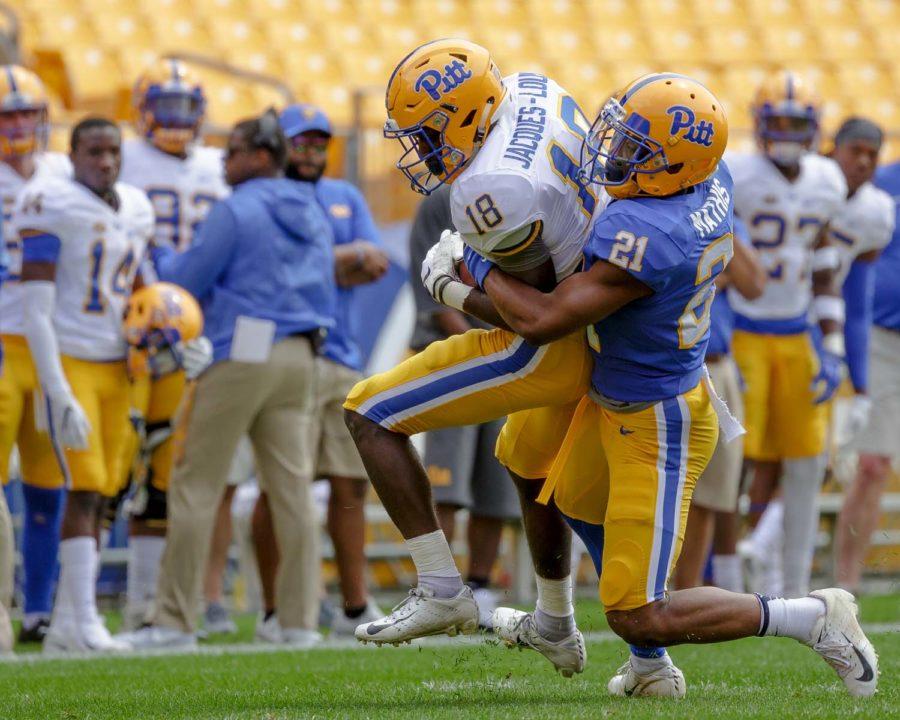 Junior Damarri Mathis (21) is listed as a co-starter cornerback alongside junior Jason Pinnock.

Ahead of Saturday night’s home opener against Virginia, Pitt football released its first official Week 1 depth chart on Monday afternoon. The suspense is now over, and though the chart didn’t unveil any shocking revelations, some of its inclusions and absences are certainly noteworthy.

First off, Pitt operates on the typical “two-deep” depth chart, in which a starter and one or two backups is listed at each position. This is worth mentioning because Georgia Tech head coach Geoff Collins made waves in the media last week by releasing a less common “above the line” depth chart for his team. This system neglects ideas of “starter” and “backup,” instead listing numerically every player capable of seeing game action at their respective position.

By going with the traditional two-deep depth chart, Narduzzi at least gave outsiders some clarity on what each starting unit will look like. But there are a few Pitt players who could’ve benefitted from a more experimental depth chart.

Sophomore V’Lique Carter, for example, is nowhere to be found on Pitt’s depth chart, despite the fact that he’ll undoubtedly see the field more than someone like redshirt freshman John Vardzel, who is listed as senior receiver Maurice Ffrench’s backup. Carter is a swiss army knife and will likely be utilized out wide and in the backfield, but his multi-positionality made it tough to account for him in a two-deep depth chart.

In the backfield, junior A.J. Davis is listed alongside redshirt sophomore Todd Sibley Jr. as the starter. This comes as a bit of a surprise, as Sibley Jr. only has one career carry to Davis’ 48. If I were a betting man, my money would still be on Davis as the early-down bellcow, with Sibley Jr. acting as the Darrin Hall to Davis’ Qadree Ollison.

Pitt’s other co-starters come on the defensive side of the ball, which speaks more to the type of depth generally needed to succeed on defense than it does about any individual player’s level of achievement. Redshirt junior defensive tackle Keyshon Camp is listed alongside senior Amir Watts, but both will get a considerable amount of action as they look to minimize each others’ workloads.

Pitt’s defensive backfield is pretty straightforward aside from the second cornerback slot, where both juniors Jason Pinnock and Damarri Mathis are listed as co-starters. Pinnock may see a slight advantage in playing time after tying for the team lead in interceptions last season, though the two will often play together in three-cornerback sets when pass-heavy opponents spread the field.

The depth at linebacker remains murky, as the team announced co-starters at both the “Star” and “Mike” positions. To clarify, “Mike” is the middle linebacker and “Star” indicates the coverage-based linebacker who plays toward the wide side of the formation. Redshirt junior Elias Reynolds, who started seven games in 2018 after starter Quintin Wirginis injured his knee, is listed alongside redshirt senior Saleem Brightwell at the “Mike” spot. Redshirt sophomore Cam Bright and redshirt junior Phil Campbell III are listed together at the “Star” position. This is one of Pitt’s least experienced spots on the roster, as Campbell previously played safety while Bright recorded only 13 tackles as a reserve last season.

The only linebacker with a sole claim to his starting job is redshirt senior Kylan Johnson, a graduate transfer from the University of Florida who joined the Panthers this summer. Johnson will man the “Money” linebacker, positioned on the short side of the field, and his experience at a high-level program figures to help Pitt’s linebacking corps immensely.

Johnson isn’t the only graduate transfer set to make an impact for Pitt this fall. Redshirt senior Nolan Ulizio is set to start at right tackle after playing in 17 games and making five starts for Michigan from 2015 to 2018. Like Johnson, he brings veteran leadership to a fairly young position group whose other starters include redshirt junior center Jimmy Morrissey, redshirt junior guard Bryce Hargrove, redshirt sophomore guard Gabe Houy and redshirt sophomore tackle Carter Warren.

Rounding out the graduate transfers is tight end Nakia Griffin-Stewart from Rutgers, who figures to play a role in the passing game despite being listed behind redshirt senior Will Gragg. Pitt used its tight ends sparingly last year and it remains a mystery how the team will utilize this duo this year, considering they’ve combined for just 18 receptions in their careers.

Pitt’s starting quarterback position involves no drama or competition, as incumbent junior Kenny Pickett will return to the role. If he gets hurt, however, quarterbacking duties appear to be up in the air. Both redshirt freshman Nick Patti and redshirt senior Jeff George Jr. are listed beside each other as Pickett’s backup, making for a potentially awkward scenario if Pickett is forced to sit out a few series.

Though Pitt’s first depth chart removes some of the suspense surrounding Pitt’s roster, Saturday night’s game will inevitably feature a breakthrough star whose name was nowhere to be found beforehand, as Carter rose from third-string cornerback to leading tailback against Duke in 2018. Kickoff at Heinz Field is set for 7:30 p.m.