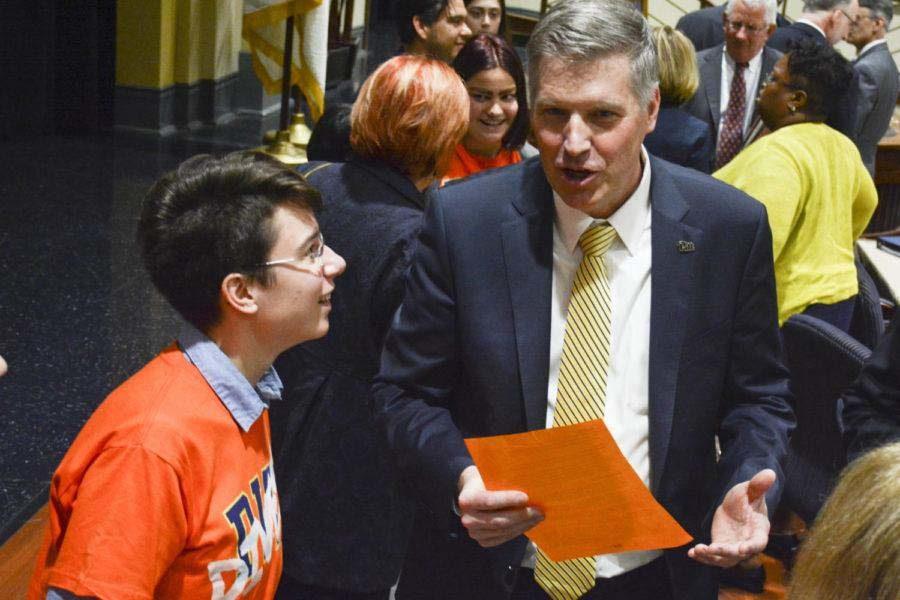 Chancellor Patrick Gallagher talks to members of the Fossil Free Pitt Coalition, wearing orange t-shirts over formal dress, at Pitt's 2017 winter Board of Trustees Meeting in the William Pitt Union.

In the letter to University community members, Gallagher said he directed Senior Vice Chancellor and Chief Financial Officer Hari Sastry to work on drafting three different strategies for implementing SRI. Gallagher framed socially responsible investing as a calculated risk for the University endowment, noting the importance of the endowment and that SRI practices are a fairly new way to manage investment.

In recent years, Pitt has been under pressure from student groups, such as the Fossil Free Pitt Coalition, to divest its endowment from fossil fuel investments. SRI practices include taking both financial and non-financial criteria — such as human rights issues, influences of climate change or contributors to societal ills — into account when managing an investment portfolio.

Gallagher charged Sastry with developing environmental, social and governance criteria to “positively screen” investments in accordance with University investment objectives and institutional values. Once developed, the criteria will be voted on by the Investment Committee of the Board of Trustees.

Sastry is also charged with screening and presenting proposed investment exclusions to the full Board of Trustees. Gallagher said the University must be careful when weighing the social value of excluding investments with the potential monetary value of including them.

At a larger level than SRI practices, Gallagher also tasked Sastry with further expanding and leveraging the University’s Sustainability Plan. The Sustainability Plan, released in 2018, is meant to introduce “deep and lasting changes” to create a University that is environmentally, socially and economically responsible.

Pitt spokesperson Kevin Zwick said that the CFO’s office has begun to review its charge from the Chancellor, but will not have any specific actions prepared for next month’s full Board of Trustees meeting. Zwick added that the CFO’s office intends to provide updates to the University community as its work progresses.

The 61-page July report, which served as a foundation for the Chancellor’s letter, weighed the positives and negatives of factoring SRI considerations into managing the University endowment, which supports research funding, scholarships, advancements in technology and student life initiatives, among other projects.The committee convened by the Chancellor to write the report, which consists of Pitt students, faculty and staff, was formed in late 2017.

In the report, the committee noted that SRI practices have become increasingly common in managing endowment-type funds and detailed SRI efforts being spearheaded at several other universities, such as Yale and Northwestern. The report detailed three ways that SRI practices can be used in managing an endowment: negative and positive screening — including or excluding certain investments due to certain characteristics — and engaging in the corporate governance process, such as sponsoring shareholder resolutions to advocate sustainability practices.

Advocates of making changes to the University’s investment practices applauded the steps outlined in the Chancellor’s letter.

Anaïs Peterson, a senior urban studies major and executive vice president of SGB, said she was excited that the Chancellor provided an update on investing the University endowment in a socially responsible way.

“I am thrilled that the Chancellor has put forward a statement regarding the SRI report, drawing more attention to the information that was detailed in the 61-page report, and I’m excited that this is happening so early in the semester,” Peterson said. “I hope that this semester students, faculty and administration can continue working together to draft ESG principles.”

The Fossil Free Pitt Coalition said in a statement that while the group does appreciate the Chancellor’s outlined next steps, they are disappointed that fossil fuel divestment is not mentioned by name. The student group has widely circulated a petition in recent years calling for the University endowment to be divested of fossil fuels.

The coalition added that positively screening new investments for the University endowment does not mean the same process would be performed on existing investments.

“His proposition to … positively screen investments does not guarantee that fossil-fuel divestment will ensue,” the coalition said.

In his letter, Gallagher also thanked the numerous organizations involved in the SRI conversation — student activists like Peterson, the Fossil Free Pitt Coalition, the University Office of Sustainability and the University Senate.

“I want to reiterate my deepest appreciation for your thoughtful contributions,” Gallagher said. “Your work has given us a wonderful starting point — one that enables us to better align activities in our endowment’s investment portfolio with our University’s core values.”

An earlier version of this story incorrectly said the chancellor released the report on Thursday. He released it Tuesday. The Pitt News regrets the error.