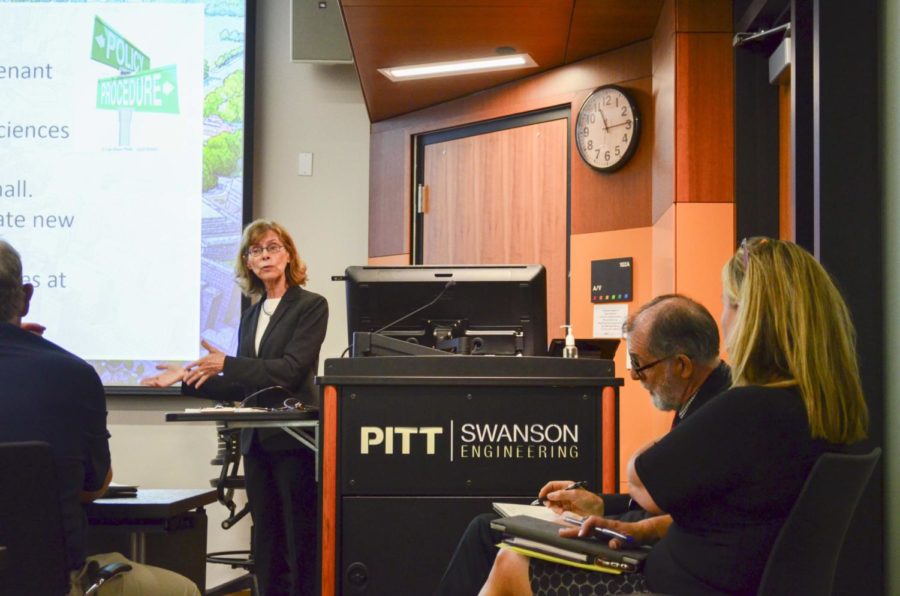 Mary Beth McGrew, the assistant vice chancellor for campus planning, spoke on creating a sense of community in One Bigelow.

In a few years, students in the School of Computing and Information will start going to class in a yet-to-be-built complex adjacent to the Oaklander Hotel — One Bigelow. But Pitt has plans for the building that go beyond the SCI.

One University official, Kristen Gusten, said Wednesday that One Bigelow will “transform” the campus and compared the new complex to the Cathedral of Learning.

“We’re going to be able to look at this building and look back at the Cathedral and realize that a transformation for a generation is going to happen,” Gusten said. “It’s exciting and we want to get it right.”

Gusten, the senior director of administration for the Office of the Provost, was one of three speakers from the University to talk about the new collaborative space at Wednesday’s report-back meeting. During the meeting, the speakers summarized feedback from three earlier community engagement sessions in August and fielded questions from those in attendance.

According to the Campus Master Plan, the new complex will house the University’s School of Computing and Information, which was founded in July 2017 and accepted its inaugural first-year class this semester. One Bigelow will replace the UPMC parking lot adjacent to The Oaklander and across the street from Soldiers & Sailors Memorial Hall. The University expects that conceptual design for the project will take six months from the end of the comment period, which has yet to be defined. Complete design will take another 12 months and construction will take 24 to 28 months.

Some of Wednesday’s conversation focused on technical details of the building. For example, there will likely be one or two levels of belowground parking to offset the elimination of the existing parking lot, and the interior will be painted in brighter colors and may even have bio walls — walls that contain plants — to improve occupants’ moods.

Mary Beth McGrew, the assistant vice chancellor for campus planning, said these small details are important to outline up-front, and that fielding comments from the public will give the University a better understanding of what people want out of the space.

But though these specific details were discussed, no designs have been released yet, as the University is still in the very early planning stages. McGrew said that may disappoint some who are looking for sleek architectural drawings, but that the goal of these preliminary meetings is to get a symbolic picture of the complex rather than a literal one.

“We are going to have a lot of time for the designers to shape the space, but this [meeting] is about a new idea — how do we work inside a new idea and what opportunities do we have,” McGrew said.

The primary theme connecting earlier comments, McGrew said, was a desire for the space to promote collaboration between its occupants. The building will foster a sense of community among those that work there, rather than keeping them isolated in their own “silos.”

“We do not let our policies and procedures create new kinds of silos,” McGrew said.

The University seeks to accomplish this through intentional design of the space with collaboration at the forefront, McGrew said. This will come through the creation of “studios,” labs with more open space than typical offices allow, and also with interdisciplinary education in mind. The design process is still in the very early stages, but Paul Cohen, the founding dean and professor in the SCI, said the building will accommodate the SCI’s attempt to break barriers between disciplines.

Cohen emphasized that though the building is creating space for the rising SCI, Pitt intends it to serve the entire University population, rather than just computer science students and faculty.

“This is a University of Pittsburgh building,” Cohen said. “My school will be in that building, and we’ll be supporting all kinds of stuff that’s going on, but we really view this as an opportunity for Pitt to think about how universities should be functioning in the coming decades.”

Cohen noted that the SCI has already started to foster this sort of collaboration. He said the SCI already offers two cross-school majors, computational biology and digital literature and interactive design, and hinted that many more — including ones in computational social science, computational pharmacy and data science — are in the works.

Cohen said the creation of One Bigelow is a vital step towards this collaborative atmosphere the University is trying to promote, and that the University needs to be successful in its endeavor.

“Collaboration goes without saying,” Cohen said. “None of the problems we are working on today can be solved in silos.”

Another report-back meeting will be held Thursday from 3 to 4 p.m. in 121 Alumni Hall, and student-specific comment sessions will be held at a later date.