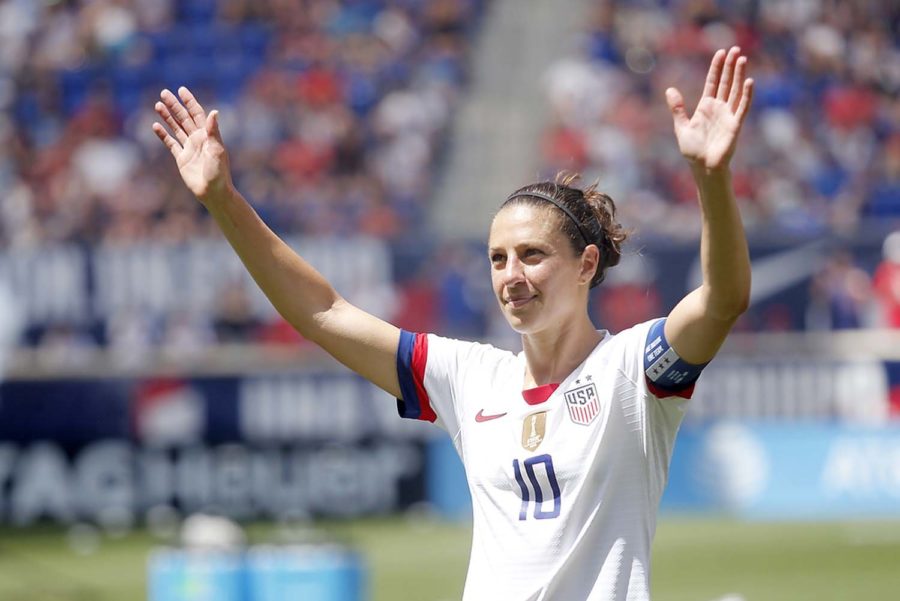 U.S. Women's Soccer captain and Delran, New Jersey, native Carli Lloyd waves to the fans at the end of a game.

U.S. women’s soccer midfielder Carli Lloyd generated buzz on Aug. 20 when a video of her making a 55-yard field goal at a joint NFL practice between the Baltimore Ravens and Philadelphia Eagles started to circulate around the Internet. It didn’t take long for people to start asking the next logical question — could Lloyd actually kick for an NFL team?

Thank you to the @Eagles for having me out! Thanks to @JustinTuck @jake_elliott22 @MayorRandyBrown for the good time and tips! 🏈 🎯 #55yd pic.twitter.com/owZ16f46Th

What started as a fun way for Lloyd to flex on social media quickly turned into something much more serious, as at least two NFL teams reportedly reached out to her about kicking for them in the preseason. Lloyd herself said she probably would’ve taken them up on their offer if she didn’t have the prior commitment of playing for the U.S. women’s national team against Portugal on Thursday night.

“It has gone from just having fun kicking to, ‘Will she play in the NFL?’” Lloyd told The Washington Post. “At first, I was just laughing about it a little bit. But the more I spoke with my husband — he is all for it — and my friends and family, they are really encouraging me to potentially take up this opportunity.”

The media cycle continued and Lloyd doubled down on her comments regarding a potential career change, telling Fox News that she would be “foolish” to not entertain the idea of kicking for an NFL team next season.

Of course, there were those who cast doubts about the prospect of a woman playing in the NFL for the first time in its nearly 100-year history. Los Angeles Chargers receiver Keenan Allen Tweeted that Lloyd might have the leg strength to play professionally, but if a blocked kick ever forced her to play defense it “Would be like the stampede scene in the lion king movie.”

Sound sweet til somebody block the kick and all of a sudden she on defense😂. Would be like the stampede scene in the lion king movie 😂😂 . She do got a boot tho! https://t.co/K8VxnHp6gB

Allen’s point was a shallow one, considering it’s not part of an NFL kicker’s job description to be able to tackle in the first place. Kickers don’t participate in tackling drills with the rest of the team, and no kicker has ever been cut from the roster due to a lack of physicality. Ravens’ kicker Justin Tucker, widely considered to be the best kicker in the league, made zero tackles last season — and has tallied just five since his career began in 2012.

Here’s a video of Sebastian Janikowski, the 10th-most prolific kicker of all time, literally dodging the ball carrier on defense:

This is one of the best kickers of the past 10 years playing defense so I’m not really sure what your point is pic.twitter.com/ImB9xLUAkW

So that argument doesn’t fly. Others poked fun at Lloyd’s 5-foot-7, 141-pound comparatively small stature to most football players. But again, kickers are always the smallest players on the field. It isn’t necessary to be tall or strong, as long as you have the leg strength to lift the ball up over the line of scrimmage. Cairo Santos is 5-foot-8, 160 pounds and currently employed as the kicker for the Tampa Bay Buccaneers.

Another argument opponents are using against Lloyd is her age. At 37 years old, she’s certainly no spring chicken. But the kicker position is one where age doesn’t really matter due to the lack of physical taxation. As long as you maintain your leg strength — which Lloyd obviously has in abundance — then you can potentially kick in the NFL. Case in point — 46-year-old Adam Vinatieri will be joining the Indianapolis Colts for his 24th NFL season in 2019. Vinatieri could pass for a grandpa. Lloyd still has plenty of gas left in the tank for an NFL stint.

Some are also upset at what they perceive to be media favoritism toward Lloyd, complaining that she only has this NFL opportunity due to her already high profile as a women’s soccer star. The argument is that there are thousands of deserving kickers across the country capable of kicking a 55-yard field goal — what sets Lloyd apart from them?

For starters, there’s the fact that Lloyd has untapped potential which could give her a genuinely high ceiling as an NFL kicking prospect. It’s unlikely that she spends hours of her own personal time kicking footballs, meaning she kicked an accurate 55-yard field goal on a whim with almost no experience. Sure, there are college kickers out there who feel spurned that their 55-yarders are going unnoticed — but they’ve spent their whole lives playing the sport and have likely already attained their fullest potential. Meanwhile, Lloyd could just be scraping the surface of her capabilities.

And if you think that singular feats of ability aren’t a viable pathway to a professional sports career, tell that to the Oakland Athletics, who earlier this month signed 23-year-old Nathan Patterson to a minor league contract after he hit 96 mph on the radar gun at a fan event.

It’s possible that Lloyd changes her mind about the whole thing or earns a tryout with an NFL team and simply gets beat out for the job. But there’s no reason she hasn’t at least earned a tryout — and who knows? With a little training and fine-tuning, maybe we could see Lloyd in an NFL uniform come 2020, as her women’s national team career nears its end. As Lloyd herself said, there’s a first for everything — and she could very well be the one to break the NFL’s oldest barrier.