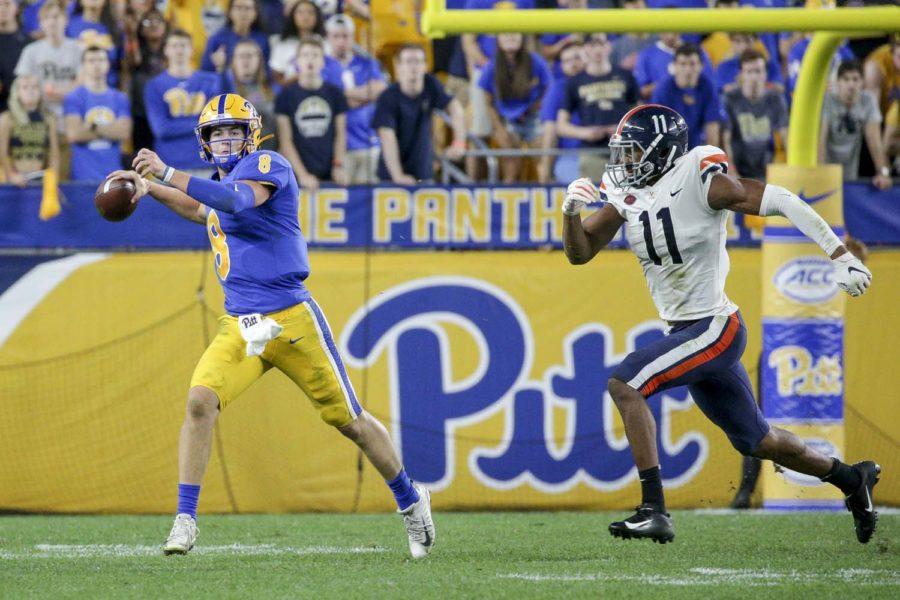 Junior quarterback Kenny Pickett (8) rolls out to his right before throwing his second interception while being chased down by junior Virginia outside linebacker Charles Snowden (11).

With Pitt football’s 30-14 opening loss to Virginia Saturday night came another annual tradition — fans voicing their overreactions to the game. This piece will contribute to the noise, and there’s certainly plenty to unpack from the Panthers’ opener.

Under the helm of new offensive coordinator Mark Whipple, the Panthers utilized a pass-heavy attack as the backfield took a backseat. On the opposite side of the ball, Pitt’s defense had its moments but couldn’t contain senior quarterback Bryce Perkins and the Cavalier offense enough to eke out a win. The game also featured several Pitt blunders that proved too much to overcome.

Has the Balance of Power in the Offense Flipped?

Last season, the Panthers relied on the run game to power them to their first Coastal title. Both Qadree Ollison and Darrin Hall rushed for over 1,000 yards behind a hard-nosed offensive line. If one wasn’t getting in rhythm or dealing with an injury, the other ran rampant and picked up the slack. The backfield was a two-headed monster symbolic of Pitt’s history as a running back school.

With both Ollison and Hall now in the NFL — and many of Pitt’s 2018 offensive line gone to graduation — Pitt was certainly expected to downgrade in the rushing department. But not many would have suspected that Whipple, although known as a passing guru, could alter Pitt’s offensive game plan so dramatically.

Junior quarterback Kenny Pickett attempted a career-high 41 passes, completing 21 of them for 185 yards and one touchdown with two interceptions. In comparison, the Panthers’ three tailbacks combined for a total of 17 rushing attempts, and the entire team netted only 78 yards on the ground. Junior A.J. Davis led Pitt with eight carries and managed to reach the end zone on a two-yard plunge. He put himself in position to score with Pitt’s biggest play of the night, a 59-yard catch out of the backfield earlier that drive.

Pickett’s performance was a mixed bag. He made a few big plays with his feet as he’s done in the past, and deserves credit for putting his body on the line to pick up an extra yard or a tough first down. He made some solid throws in tight windows at times, but also had several head-scratching misses on deep balls. Junior wideout Taysir Mack didn’t help Pickett by committing an uncontested drop.

There’s no use in making assumptions that the offense will be so pass-happy all the time after only one game, but it’s quite clear that airing the ball out will be a much more prominent strategy. Whipple seemed to favor a short, move the chains style in order to help Pickett get the ball out quickly, mixed with a few deep shots. It felt like the Panthers went entire drives without running the ball. Even if the run game isn’t taking off, Pitt still needs to utilize it to avoid predictability. Repetitive play-calling almost certainly contributed to Pickett’s first interception, as Virginia linebacker Matt Gahm seemed to know exactly where the ball was going that play.

Whipple was hired to bolster the pass game, and it appears he is going to do exactly that. He still has much work to do with Pickett, who could’ve changed the outcome of the game with a few more accurate throws. Whipple would do well to give the run game a greater opportunity to get going or else face the consequences of a one-dimensional offense. Next week’s matchup against Ohio should provide a better look at what fans can expect to see during Whipple’s first season.

Good football teams don’t usually make stupid mistakes. And if they do, they often have enough talent to overcome the blunders through big plays. The Panthers committed several slipups that proved fatal Saturday night.

The first came about halfway through the first quarter, with the Panthers in punt formation deep in their own territory. Pitt sophomore linebacker Cam Bright, charged with protecting sophomore punter Kirk Christodoulou, made a half-hearted attempt to block the edge rusher coming at him. His man managed to block the punt, putting the defense on the field and on its heels. A few plays later, Perkins found senior tailback Chris Sharp on an out route for the score.

As mentioned before, Pickett failed to connect on several deep throws. When he finally put one on the money, Mack, who was quite reliable last season and made several eye-popping downfield grabs, failed to haul in an easy catch. Pickett and his receivers just couldn’t quite get on the same page on longer throws. Those are exactly the type of plays Pitt needs to win, especially if the run game struggles.

Pickett also tossed two costly interceptions in the second half. The first was bad for several reasons, as Pickett eyed his receiver up the whole way, allowing an opposing linebacker to easily predict the throw. Whipple also may be to blame, as Pitt had run a similar play repeatedly leading up to the turnover. Like the blocked punt, the interception occurred on the Panthers’ own side of the field. Virginia received easy field position and again capitalized with a score. Pickett’s second pick was a bad throw into tight coverage that ended any chance of a comeback with the clock ticking down in the fourth.

The Panthers have struggled with discipline and turnovers under head coach Pat Narduzzi at times. Although Pitt only committed two penalties, the turnovers proved enough to prevent a win. This is something that must be buttoned up if the Panthers hope to win close games and keep the tougher matchups on the schedule from getting ugly.