City of Asylum hosts poets laureate from across the country 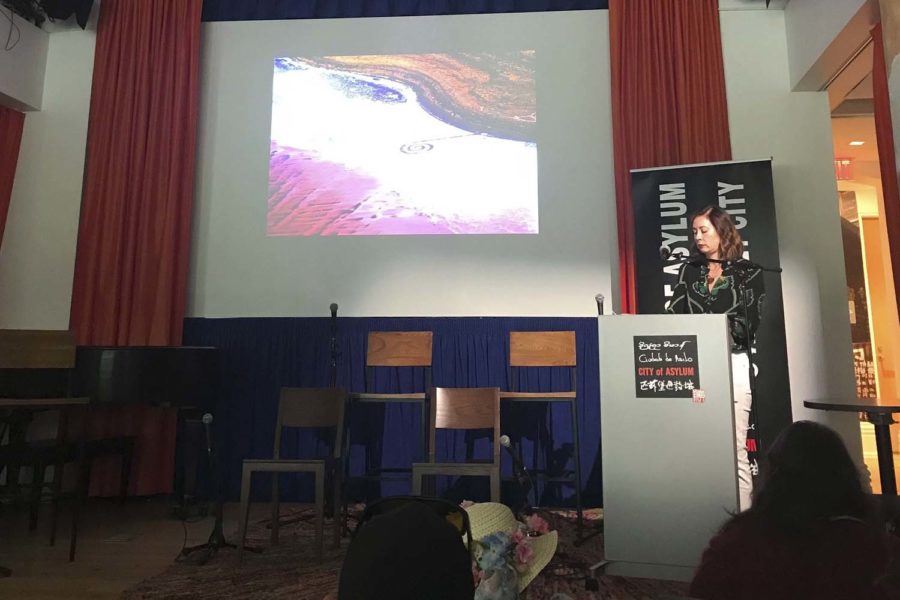 “Nobody knows,” Salas Rivera said. “In the most practical sense, I tell a joke which is ‘it means answering emails.’ But beyond that, it means creating civic projects, creating programming, but also kind of designing it in the way you want it to be.”

More than 60 people attended a poets laureate celebration event hosted by City of Asylum in the North Shore Monday. The four poets laureate — Paisley Rekdal, Salas Rivera, Kim Shuck and Molly Fisk — each read from their own collections.

They also discussed their work as poets laureate at the state and city level, which consists of putting on local readings and mentoring younger poets and other members of the artistic community. Local poets laureate are different from the U.S. Poet Laureate Consultant in Poetry, who is appointed by the Library of Congress to incite nationwide appreciation of poetry.

Since its inception in 2004, City of Asylum/Pittsburgh has welcomed international writers seeking refuge from their home country. The space in the North Shore also serves as a bookstore and performance venue, the latter of which hosted Monday’s event.

After a brief introduction to the poets by Director of Programs Abby Lembersky, each of the poets took the stage for individual readings. Shuck — the poet laureate of San Francisco — gave the first reading, where she read from her collections “Murdered Missing” and “Deer Trails.”

Shuck’s collections highlight the gentrification she’s seen in San Francisco, in addition to her experience as a member of the Cherokee Nation of Oklahoma. During her time, she spoke about the violence Native women face, which serves as the topic for the work she read. Shuck cited a statistic which states that Native women are 10 times more likely to be killed or vanished than any other group in the United States.

For her reading, Shuck recited multiple entries from “Murdered Missing,” each beginning with a day and a number, like a journal.

“Day 40 / Last seen wasn’t her first name / they sing for the women at risk / offer them smudge, she searches / because it could’ve been her / they bring licorice, and check in / because everyone deserves to be looked for,” Shuck read.

“The thing about reading after another poet is you’re kind of drowning in their words, which is good,” Fisk said.

Fisk then read from a variety of her poems, many of which meditate on California wildfires. Prior to this rendition, Fisk told the audience the difficulty she had in ordering an N95 mask — which protects from floating air particles — in order to go outside.

“I live close enough to some of the big fires we’ve had in Northern California to have had to write to Amazon to order an N95 mask to wear whenever I went outside of the house, but they had sold out by that time. So a lot of us were wearing the sort of bandanas you see in Western movies, which are absolutely useless,” Fisk said.

She then read from another one of her poems, “Summer Lightning.”

“If you think about joy enough, maybe death will make sense: / a matter of balance,” Fisk read. “The deer caught in the fire outside Redding, / the rabbits and bear cubs, king snakes … and you know when 30 boats / melt at an Anchor in Whiskeytown, fish in that lake have perished.”

Following Fisk was Salas Rivera. They consider themselves to be both a Puerto Rican and Philadelphian, although they noted that distinction can be “polemical.”

Salas Rivera read from their collection, where they dissect what it means to be Puerto Rican, especially following the devastation of Hurricane Maria — the Category 5 hurricane that affected Puerto Rico, Dominica and the U.S. Virgin Islands in September 2017.

Throughout their reading, Salas Rivera alternated between English and Spanish lines. They later categorized this styling as “fragments in English and footnotes in Spanish.”

“There have been nine reported suicides since the hurricane,” Rivera read.

Following Salas Rivera was Utah’s poet laureate, Rekdal. She shared her book-length poem and multimedia project she was commissioned to write for the 150th anniversary celebration of the Transcontinental Railroad.

After giving a brief overview of Utah’s history, Rekdal then asked for someone to dim the lights. She stood quietly while her multimedia project, which featured a history of the Transcontinental Railroad and the Chinese Exclusion Act, played on the screen next to her.

“We do not ride the railroad,” an anonymous voice said in the video on the screen. “The railroad rides on us.”

Following Rekdal’s presentation was a Q&A session, where the poets laureate fielded questions from the audience. When asked what it means to be a poet laureate and how these poets came into their role, each poet emphasized the importance of bettering their individual communities.

“This is not a position about you,” Paisley said. “It’s about other people.”