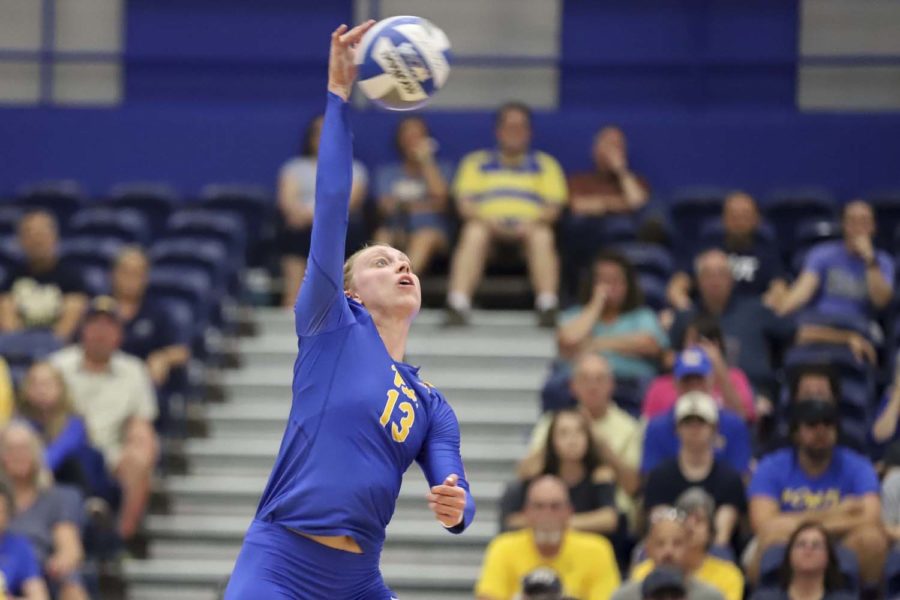 By Elliott Borawski, For the Pitt News

Pitt volleyball led the weekend in Pitt sports, winning all nine of its sets as it swept through the three-game Panther Challenge to begin its regular season. Both men’s and women’s soccer teams played close games but couldn’t come away with wins, losing all four contests by one point.

Pitt volleyball entered the 2019 season with high expectations after being picked as the favorites to win the ACC. The Panthers lived up to the hype in their season-opening tournament over the weekend, sweeping all three opponents they faced in the Panther Challenge at the Fitzgerald Field House.

The No. 12 Panthers first faced Cleveland State on Friday afternoon, hoping to start things off right after losing an exhibition game to Dayton last week. Pitt reigned successful this time, winning with a final score of 3-0.

Pitt didn’t get much of a rest, taking the court again on Friday night to face Cincinnati. The Bearcats didn’t put up much of a fight, falling in straight sets just as Pitt’s previous opponent had. The Panthers dominated once more with scores of 25-18, 25-13 and 25-16.

Senior Nika Markovic helped Pitt’s cause by recording four aces and 11 digs, while junior Chinaza Ndee led the team with three blocks. Akeo picked up where she left off in game one and tacked on 32 assists. Williams and Lund provided 10 kills each as part of a well-rounded team attack.

To wrap up the weekend, Pitt hosted South Carolina on Saturday night. The Panthers again displayed the talent that made them preseason ACC favorites, winning 3-0 in this game also. They beat the Gamecocks 25-21, 25-16 and 25-20.

This game featured new leaders in the kill column with Ndee and Markovic both having nine. Redshirt senior Hali Hillegas added 10 digs to the mix for Pitt too.

The Panthers will look to keep their undefeated season rolling in the ChampYinz Invitational next week. It features an 8 p.m. showdown against Ohio State in the PPG Paints Arena on Friday and home games in the Fitzgerald Field House Saturday against Green Bay and Duquesne.

The Panthers traveled to Dartmouth Friday afternoon for their third game of the season, falling 2-1 to the Big Green. Dartmouth controlled the game, hoisting 10 shots with four on goal compared to five and three, respectively, from the Panthers. Pitt had zero shots at the half which contributed to a 1-0 deficit.

The Panthers picked up the pace in the second half, tying the game in the 46th minute with a goal from first-year forward Amanda West, assisted by redshirt senior midfielder Juliana Vazquez. Unfortunately for Pitt it wasn’t enough, as a Dartmouth goal in the 61st minute served as the decider.

Pitt played another road game Sunday afternoon against UMass that ended in the same result, 2-1.

UMass took a 1-0 lead in the 58th minute, but the Panthers again came back. In the 80th minute, West was clutch in tying the score with a penalty kick. But UMass kept its composure and delivered a goal in the 86th minute. Pitt couldn’t rebound and lost in heartbreaking fashion.

The Panthers have two home games this weekend — Friday against Rhode Island and Sunday against Saint Joseph’s. Pitt is 2-2 on the season and will hope to bounce back against these Atlantic 10 foes.

Pitt opened up its season with a road game against the Indiana Hoosiers on Friday night, losing a double overtime thriller 3-2.

The Panthers got off to a great start, scoring the first two goals of the game. Both came from junior forward Edward Kizza and occured within quick succession in the 35th minute. The first was assisted by junior defender Sito Sena and the second by first-year forward Veljko Petkovic.

But Indiana responded with goals in the 50th and 56th minutes to equalize the game. Pitt hung in with Indiana for awhile after, but ultimately lost in the 103nd minute when Indiana scored on its second shot of the double overtime period.

Pitt next played Northwestern in Bloomington, Indiana for its second game of the Adidas/IU Credit Union Classic Sunday evening. In the same stadium where Pitt lost to Indiana, it fell to Northwestern by a score of 1-0.

Northwestern scored two minutes into the game, and despite major efforts by the Panthers, the score held up.

The Panthers actually out-shot Northwestern 15 to 10, but couldn’t get any past junior goalie Miha Miskovic. Pitt also had its chances with eight corner kicks, but couldn’t convert on those opportunities.

The Panthers will look to win their first game of the season when they host Liberty Friday at 7:30 p.m.