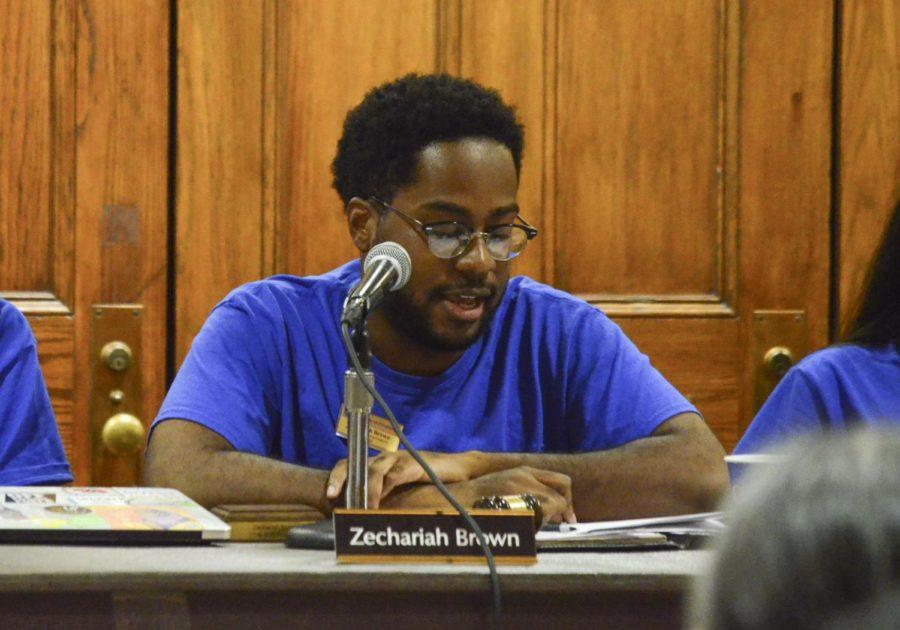 SGB President Zechariah Brown introduces the organization at the first meeting of the year.

Student Government Board kicked off its first meeting of the year Tuesday night. The meeting consisted mainly of members introducing their initiatives, student organizations’ concerns and allocations.

University spokesperson Meg Ringler said in an email Tuesday that the changes were caused by a routine audit of student organization names, which revealed many names that are not in compliance with existing guidelines.

“The review of guidelines and organization names made us aware of the discrepancies in student organization naming,” Ringler said. “As a result of these findings, we provided instructions and updates intended to clarify and ensure compliance with these existing guidelines by the start of the next academic year.”

Brown said he will meet with Student Organization Resource Center Coordinator Lynne Miller and Student Life Director Linda Williams-Moore, along with SGB Executive Vice President Anaïs Peterson and board member Eric Macadangdang on Friday to discuss the changes. According to Brown, many student organizations are upset by the changes and have been in contact with SGB, but no organizations raised concerns about the changes at the Tuesday meeting.

Brown said these organizations see the possible name change as a major change to their branding, marketing and personal reputation. SGB’s goal is to allow student organizations to keep the names they currently have.

“We want to address those concerns and we want to allow student organizations to keep the name they have at the moment,” Brown said.

Following Brown’s introductory remarks, board and committee chair members introduced themselves, promoted open positions on their committees and explained their initiatives for the year.

Durga Ramachandran, a sophomore economics and political science double major, serves as the chair of the Academic Affairs Committee. She said the committee will work on the policy for getting course credit for internships, as well as working to improve peer mentoring, create formalized summer research opportunities for first-year students and work with the Office of Student Conduct to place flyers about Pitt’s medical amnesty policy around campus.

Grace Nelson, a senior studying political science and English literature, is the chair of the judicial committee. She said the committee will work on marketing itself as a resource to student organizations and assist organizations in the SORC-required constitution writing process.

Matthew Niedoba, a senior chemical engineering major, is the chair of the facilities, technology and transportation committee. He said the committee will focus on extending the hours of the William Pitt Union’s food court to include the weekend, improving dorm sign-in procedures and working towards improvements with the University’s Duo Mobile two-factor authentication software.

Nina Duong, a sophomore biology major, is the chair of the wellness committee. She said the committee’s initiatives include expanding handicap accessibility, adding more vegan, vegetarian and “healthy” options to dining halls, creating free workout classes for students and establishing a peer-counseling center.

Ravi Gandhi, a sophomore engineering major, is the chair of the diversity and inclusion committee. According to Gandhi, the committee is split into four different project teams this year — one each dedicated to LGBTQ+, cultural, student income and accessibility issues. Gandhi said each team will have a weekly open-floor meeting where students and campus leaders can discuss issues and collaborate on events.

As chair of the community and governmental relations committee, Tyler Viljaste said he will be assigning a specific theme to each month of the academic school year, and planning initiatives accordingly. The sophomore political science major said additional details about September, deemed civic engagement month, would be provided at next Tuesday’s board meeting.

Ben King, a junior political science and communications major, is the chair of the allocations committee and did not mention any specific initiatives the committee is working on. King is a copy editor at The Pitt News.

The African Students Organization requested $14,837.64 for a Sept. 28 concert. The board approved in full.

Pitt Club Tennis requested $1,628.64 for tennis equipment. The board denied in full.

The Latinx Student Association requested $4,064.95 for a speaking engagement featuring actor Joe Hernandez-Kolski during Hispanic Heritage Month. The board approved $4,000 and denied $69.95.

The Latinx Student Association requested $2,137.55 for a speaking engagement featuring author Bobby Gonzalez during Hispanic Heritage Month. The board approved $1624.87 and denied $512.68.

The Salsa Club requested $3,600 for a series for three-hour salsa dancing workshops. The board approved in full.

Pitt Chem-E-Car requested $5,683 for costs related to the annual American Institute of Chemical Engineers national competition. The board approved $5,000 and denied $683.

A previous version of this story referred to the chair of SGB’s academic affairs committee as Durga Ramachandra. Her name is Durga Ramachandran. The article has been updated to reflect this change. The Pitt News regrets this error.