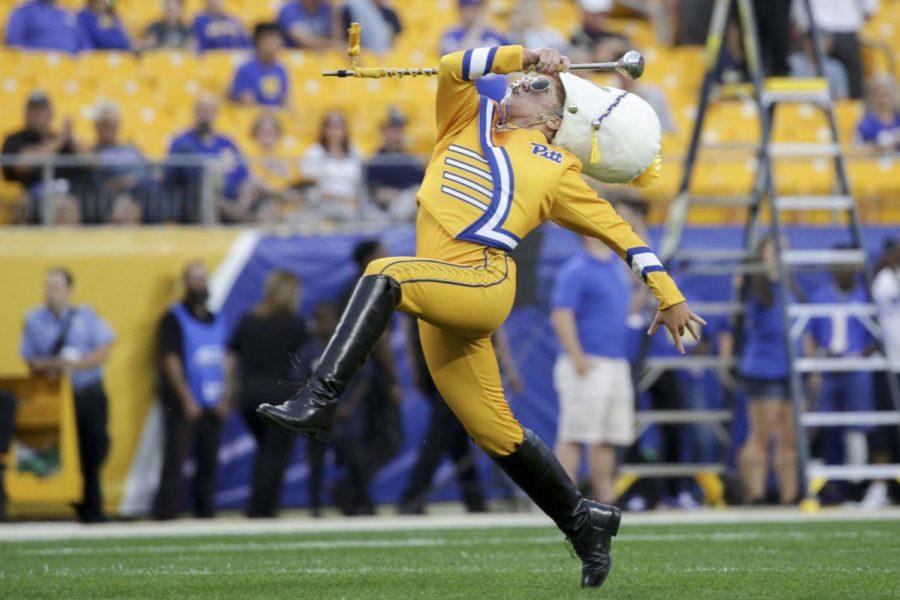 A high-striding, flamboyant prance to midfield with all eyes in the stadium on you. There’s nothing else to watch — it’s pregame, after all, and Pitt football has yet to take the field for its 2019 opener against Virginia. There’s nothing for fans to do but watch this yellow-clad, tall-hatted spectacle of a person marching ostentatiously downfield to the 50-yard line.

But the strut is part of the job, so the show must go on. Next comes the hard part — the bend.

All the way back until your head touches the ground, like a handless crab walk. Some drum majors use the tall plume of their cap as an advantage — not Shannon. She removes the cap and pauses, either for dramatic effect or to compose herself for the ensuing feat of showmanship. Legs spread at shoulder width apart, hands on her hips, she begins to bend her knees forward while simultaneously leaning backward.

“This was like, two years ago, but I used to think to myself, ‘If I ever go out there and I’m not sure if I can make it, that would be horrible,” Shannon said. “That would be a terrible feeling, I’d be so scared.”

But there’s nothing for Shannon to be scared of now — not after countless sessions of trial and error in her bedroom, placing pillows on the floor and practicing the backbend until she no longer needed the cushioned landing. She keeps bending under an invisible limbo bar until her back is parallel to the ground, then finally cocks her head back and touches it to the turf, even adding a fist pump as a show of confidence. After waiting in tension, the Heinz Field crowd erupts in applause.

“I’m told that girls would have an easier time doing a backbend because, I don’t know, something about your center of gravity,” Shannon said. “Because guys have their center of gravity closer to their shoulders, it’s apparently more difficult for them to stay upright.”

It’s ironic, then, that female drum majors might actually enjoy a slight performance advantage over men. Because for the first 107 years of Pitt Band, the position was held strictly by male students. Women weren’t even permitted to join until 1972.

To Shannon, the whole idea of being Pitt’s first female drum major didn’t occur to her in the beginning. After joining band as a first-year student, she just knew it was something she wanted to do eventually.

“When I first saw that run-out, I was like, ‘Oh, that is so sick. I totally want to do that,’” she said. “And it didn’t really cross my mind whether or not a woman had done it before. I didn’t realize that no one had ever done it.”

Becoming Pitt’s drum major just seemed like a natural progression. Shannon had earned the same position as a senior at New Jersey’s Midland Park High School before coming to Pitt. After originally planning not to participate in college marching band at all, she changed her mind and joined the program’s mellophone section in her first year. She switched to tuba as a sophomore before finally becoming an assistant drum major in her junior year, putting her in prime position to take over the lead role as a senior.

“It didn’t seem like an insurmountable barrier to me,” Shannon said.

In her role as drum major, Shannon’s responsibilities include more than just touching her head to the ground. She has to call out commands and help teach new members of the band how to march. She also must get up on the ladder and be ready to conduct the band during performances. As the intermediary between the press box and the band members, this can be a tricky task. Shannon has to start and cut off the band during specific breaks in the action — if they play through the snap, they can be called for a penalty by the referee.

“That made me super nervous because people will go on message boards online and talk trash on the school’s drum major if you don’t do a good job,” Shannon said. “Most people don’t know how it works, and they don’t know that it falls on your shoulders. But you definitely feel that responsibility.”

The drum major is certainly tasked with a lot of responsibility — after the band director and assistant band director, they’re next in the chain of command. It’s the highest position a student can attain without being hired to the University staff.

Though it didn’t originally occur to Shannon, some of her bandmates spoke about the significance of seeing a female student reach the highest level within the program.

“To have a female finally reach that position is a pretty big deal,” senior mellophonist Annalise Shaffer said. “That was the last thing in Pitt band that a female hadn’t reached … It is a big deal, after 108 years, to finally get a female drum major.”

Shaffer also sees a side of Shannon that many aren’t exposed to, considering the two are roommates. She spoke about her friend’s Napoleon complex and that she often makes people forget that she’s barely 5 feet tall.

“She’s like the biggest personality possible in this tiny frame,” Shaffer said. “She also has this really fiery personality, like she’s always really hype. Even if we had a long practice and it’s a hard time, she’s there, still with a positive attitude, making sure that we’re doing our best and succeeding.”

Junior piccolo player Bre McVay added that seeing Shannon in the role gave other women on the team a sense of empowerment.

“It’s nice seeing representation in that position,” she said. “I’m not sure I’d ever go out for drum major, but I feel more so that I could now that I see Crissy in that position.”

If there was a moment when Shannon truly realized the significance of her own achievement, it happened after last Saturday’s pregame performance, when Pitt band alumni from years past came to talk to her. Their stories and words of encouragement reminded her of a not-so-distant past when the idea of a female drum major still seemed outright ridiculous. Her accomplishment, in many ways, means more to them than it does to herself.

“It’s very, very important to alumni of the band — women who, in the ’80s, tried out and were flat-out just told ‘No. You’re not allowed to be the drum major because you’re a woman,’” Shannon said. “There were alumni of the band who came up to me after the pregame and were like ‘Wow. I cried when you hit midfield.’ That’s crazy.”